Checking out corals and seagrasses at Sentosa

A small team surveyed the natural shores of Sentosa early this morning. The main mission, to check for coral bleaching and see how the seagrasses are doing. 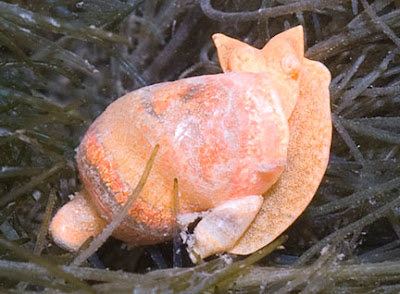 But I was distracted by these strange Volvatella slugs (Volvatella vigourouxi). There was a bloom of Hairy green seaweed (Bryopsis sp.) today and there were lots of these slugs among them. I noticed the big slugs often had a small one stuck on it. Smaller males on bigger females? So much more to learn about our shores!

How nice to come across the Discodoris lilacina nudibranch here. Just as for the Volvatella slug, this is our first sighting of this nudibranch for Sentosa! It was a lump under a rock. It's best identified by the spots on its pale foot. And look, it has a pair of tentacles underneath too. 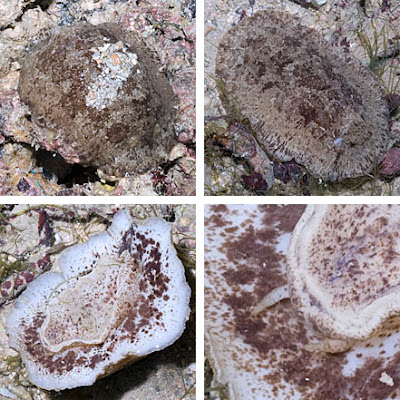 One of the objectives of this trip is to see how the corals are doing on Sentosa's natural shores. Sentosa was among the worst hit during the mass coral bleaching in 2010. We started from the western shore behind Underwater World and saw many corals here. On the old jetty, there were some large and interesting corals! 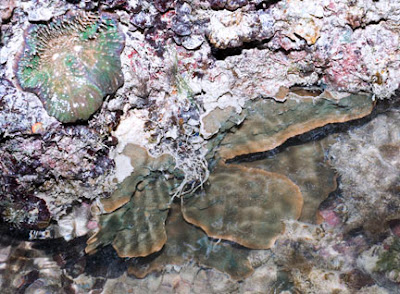 Tucked among the big boulders were more corals jammed next to one another. An Anemone coral (Goniopora sp.) and a Galaxy coral (Galaxea sp.). 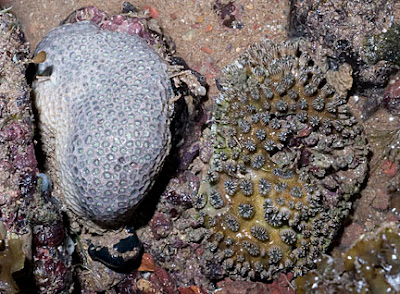 Shao Wei found a nice Circular mushroom coral (Family Fungiidae) our first sighting of this for Sentosa since the reclamation for Resorts World Sentosa. I saw another which looked like a young Tongue mushroom coral (Herpolitha limax).

We saw many Sandpaper coral (Psammocora sp.) that were nice and brown. This species were among the first to bleach during the last mass coral bleaching in 2010. 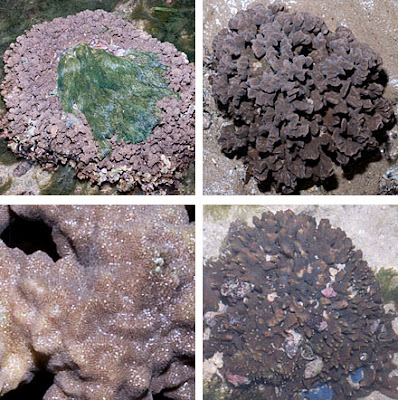 There were also some small Disk corals (Turbinaria sp.).

I didn't come across the large patch of branching Montiopora corals (Montipora sp.) that used to be right behind Underwater World, but there were still healthy colonies of these corals here and there. As well as those that formed encrusting colonies. 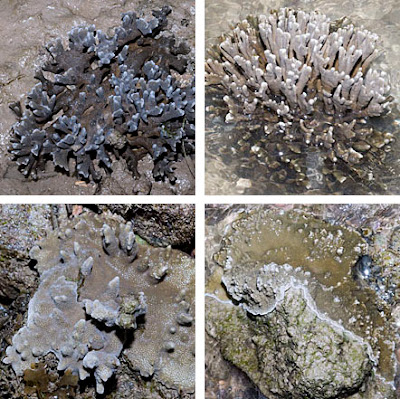 The most abundant corals were Pore hard corals (Porites sp.), both smooth ones and lumpy ones. Most of them were not bleached. 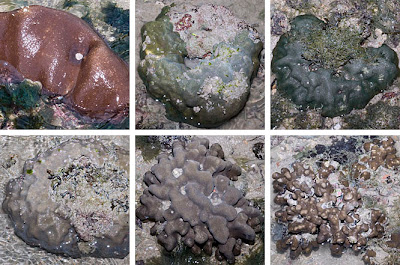 Also abundant were  Favid coral (Family Faviidae) of all kinds. 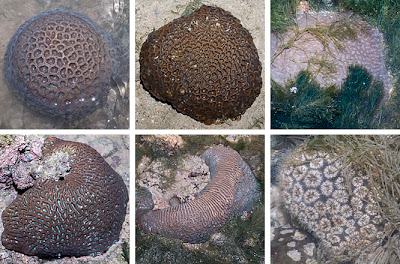 Shao Wei spotted one small Leathery soft coral (Family Alcyoniidae). It seems fine. By the time we got to the western shore, the tide had already turned so we couldn't really survey it properly. But here's what I saw there in Nov 2011. 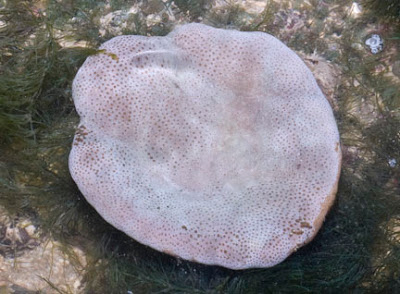 There are all kinds of sponges on the shore and most of them seemed fine. 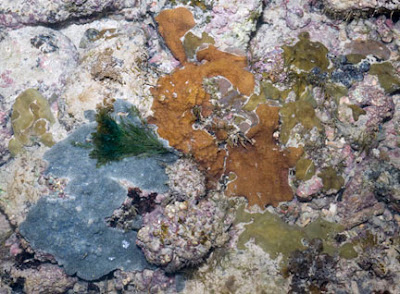 I saw one bleaching sponge, and several bleaching corals, Shao Wei found one totally bleached coral. But these were a small proportion of the colonies we saw today. 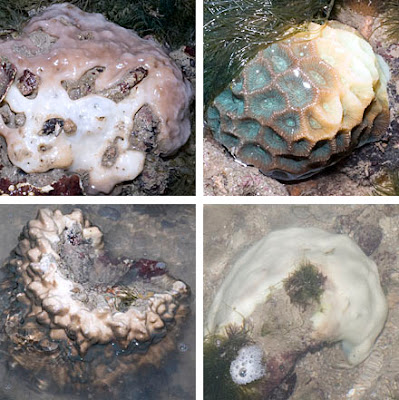 I saw this rather strange looking zoanthid. Not quite sure if it's something different from the usual Broad zoanthids (Palythoa mutuki). There were lots of Button zoanthids (Zoanthus sp.) too.

We noticed there is a lot more sand on the northern shore than on our earlier trips. This is starting to bury some of the corals. 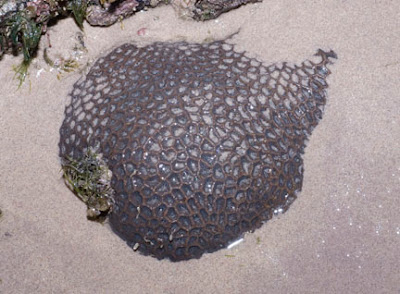 But the sand is home to all kinds of animals. We saw several Cake sand dollars (Arachnoides placenta) and also some Acorn worm (Class Enteropneusta) signs. 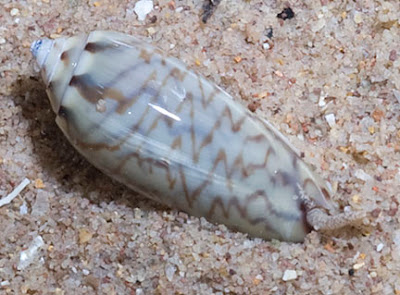 Shao Wei's sharp eyes spotted this fish that pretends to look like a dead leaf, floating with the waves on its side. It's the Brown sweetlips (Plectorhinchus gibbosus). 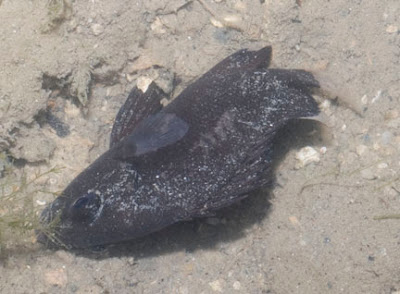 I started the trip by doing some TeamSeagrass monitoring on the seagrasses near the area reclaimed for Resorts World Sentosa. I last checked for this in Jul 2011. There's quite a lot of seagrasss here still, with more species than on the western side next to Rasa Sentosa! Here's a nice patch of Sickle seagrass (Thalassia hemprichii). 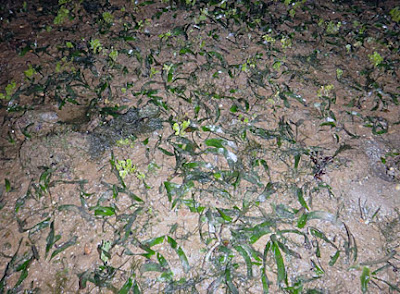 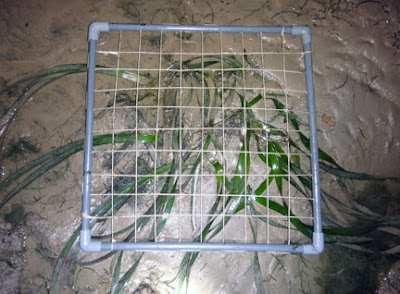 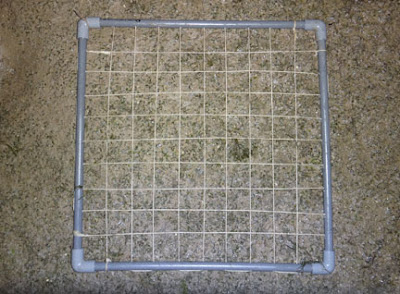 On the western shore, it was good to see nice long Tape seagrasses. 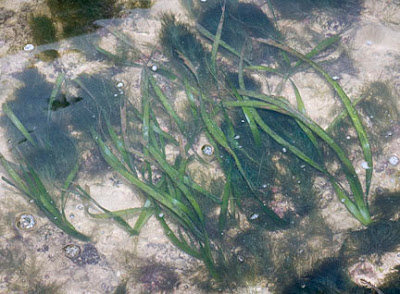 Although there were some with short leaf blades, these were not as short as those on Cyrene Reef. 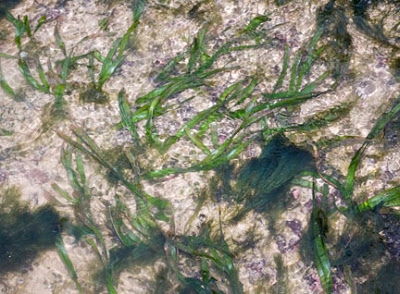 Sentosa continues to have a wide variety of interesting seaweeds.

The western shore is one of the best representations of natural cliffs in Singapore with many rare trees such as the two Nyireh trees (Xylocarpus rumphii) which are Critically Endangered. They both looked fine although some of the leaves were full of tiny holes bitten by some kind of caterpillar I think. They were both not fruiting or flowering. 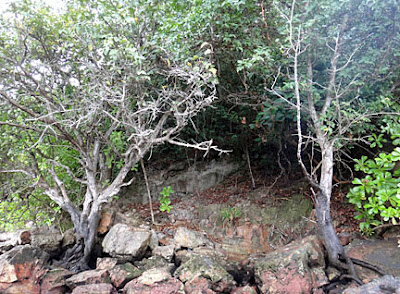 Other special plants on this natural cliff are Raffles' pitcher plants (Nepenthes rafflesiana) and Delek air (Memecylon edule). Also lots of Sea Teak (Podocarpus polystachyus). They were all doing fine. 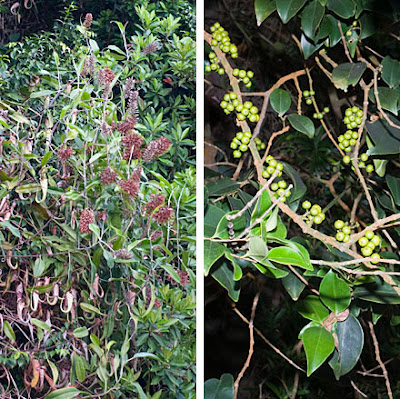 This natural Sentosa shore lies opposite the massive reclamation works for the new Pasir Panjang Container Terminal. Will these works affect this shore? We can only keep visiting the shore to see how it does. 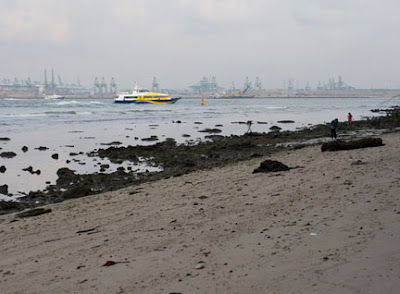 I must come back again and this time start from the western shore, which we missed surveying properly as the tide is just too short to do everything that we want to do!

Tomorrow morning, a big team heads out to Cyrene Reef for a predawn survey.

Pei Yan saw more cool stuff that I missed. Check out her blog for photos and stories.
Posted by Ria Tan at 6:42 PM