SeagrassWatch check up at Cyrene

We're back on the star-studded shore of Cyrene! While most of the seagrasses at Cyrene seem to be alright, and the Knobbly sea stars are still abundant, we have recently noticed some worrying seagrass trends. 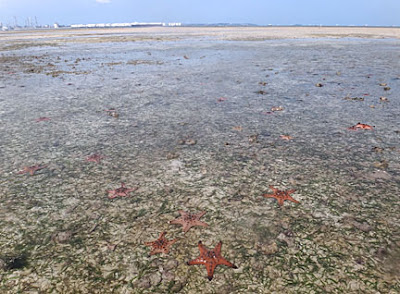 As the seagrass experts, Len and Rudi of international SeagrassWatch, are in town, we took this opportunity to show them what is happening at Cyrene.

Something has been happening to the Tape seagrass (Enhalus acoroides) on Cyrene and elsewhere in the Southern shores. Tape seagrasses are usually 50-70cm long, sometimes even longer. But over the last year or so, from TeamSeagrass monitoring and our other trips, we noticed that the seagrasses in the South look 'chomped', with many blades chopped clean at the same height of 4-10cm. Almost as if they had been mown. 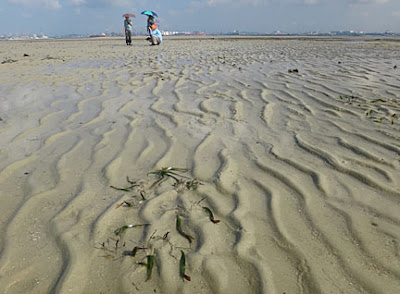 Many of the other seagrasses growing on the areas exposed at low tide were also 'burnt'. 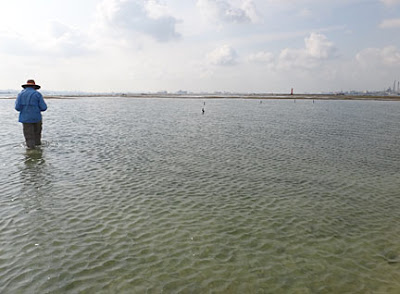 This is what the pool looked like in 2009, with Jeff and Collin of NParks doing a survey of the abundant variety of fishes found in the pool.

Today,  most of the Tape seagrass in the pool were cropped, and yellowish at the growing base. Oh dear. 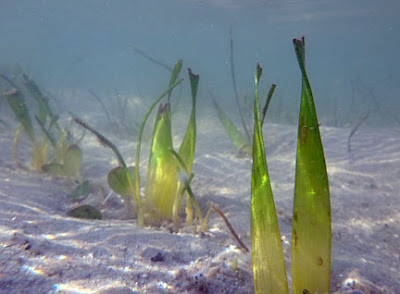 Len suggests one reason why the Tape seagrass got 'chomped' was because it was too hot. Especially for those growing on the white sandy areas which reflects the light. Also, the rather stiff Tape seagrass tends to have a short portion standing upright, with the rest of longer leaf blade flopping over. The creased portion may have been weakened by exposure and heat. Indeed, it seems to me that the hot season has recently started earlier and lasted longer. If this is so, and it coincides with low spring tides which expose the seagrasses to higher temperatures and drying out for a longer period, this might have affected these long seagrasses. 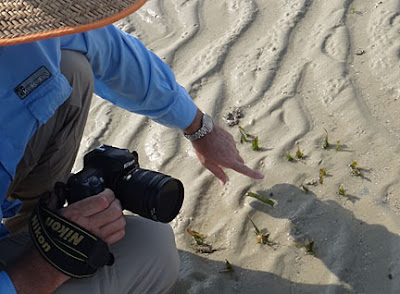 We spent a little time exploring the reefier edges near the Cyrene beacon, which is at the end of this 1km long reef. 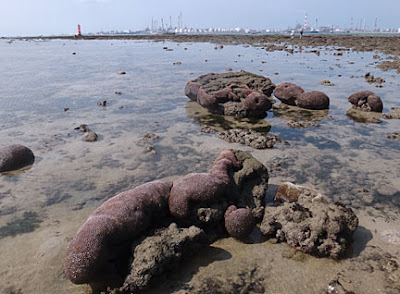 In this area, we were glad to see longer Tape seagrass among the corals and rubbly area. 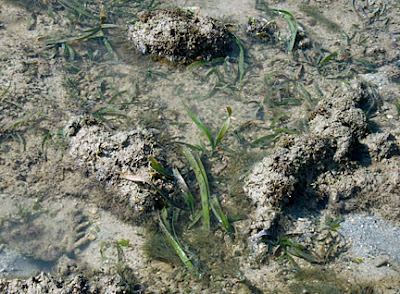 Those that remain submerged at low tide seem to still be long. Also, unlike the sandy pool and white sandy areas, the ground here is probably less reflective? There's still so much more to learn about our seagrasses and shores! 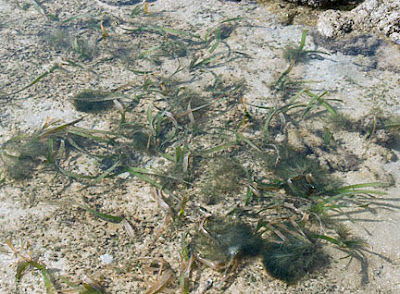 A brief look showed some soft and  hard corals in this area. 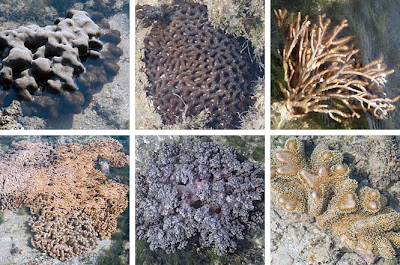 Once again, I noticed a Brahminy kite resting on the reef! I've noticed this before at Cyrene as well as at Terumbu Pempang Tengah. 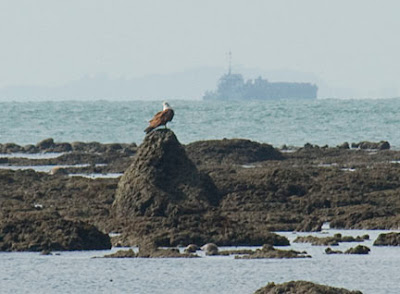 And here is the handsome creature flying past us. 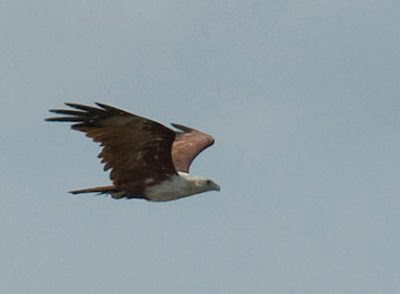 Also flying by, some kind of Egret. 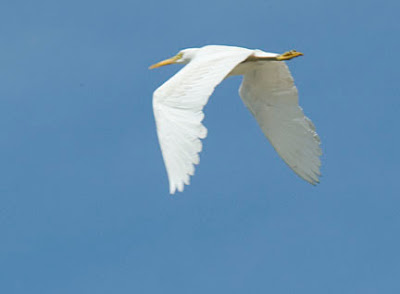 And another Egret, but with dark plumage, foraging in the distance. It's not much bigger than a Knobbly sea star (Protoreaster nodosus)! All these birds are reminding me that I'm missing World Migratory Bird Day events at Sungei Buloh! 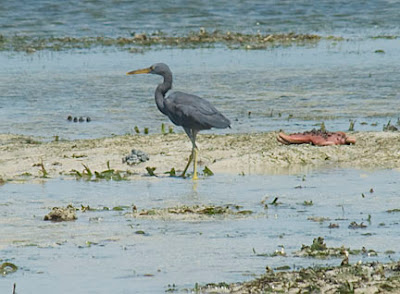 There are still lots of Common sea stars (Archaster typicus) everywhere, many in 'mating' position. Also abundant were Cake sand dollars (Arachnoides placenta). I saw some White sea urchins (Salmacis sp.) but not in such large numbers as on previous trips. 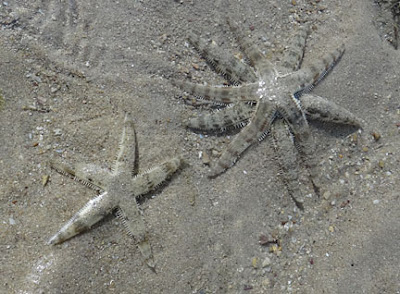 It's a really hot day and some of the stranded Knobblies were all curled  up. 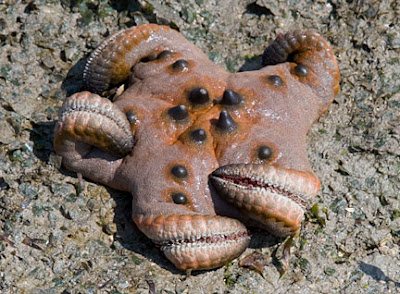 Even humans are feeling the heat! Nor Aishah and Siti join me in wielding umbrellas against the sun. Alas, the wind was blowing in the 'wrong' direction. I persisted and broke my umbrella! But the other ladies just gave up after a while. 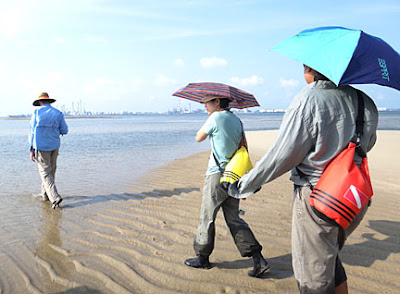 Just as we were leaving, I came across this strange snail that I've not seen before. Is it Polinices peselephanti? Cyrene is amazing! Always something new to discover on every trip! 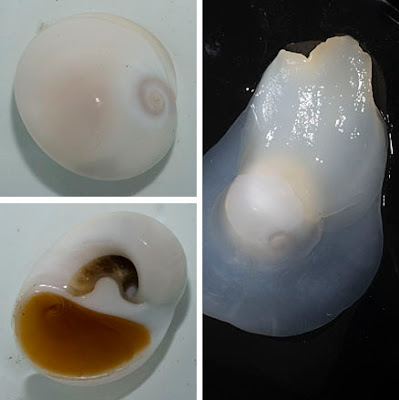 Before we left for the trip, Len and Rudi had a look at the new poster at Marina Keppel Bay of the amazing marine life that can be found inside the marine life itself. Some of us volunteers were involved in helping the Marina document this marine life. The Marina recently won international recognition for their marine conservation efforts. 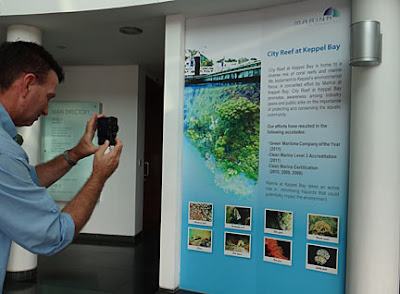 Len and Rudi also had look at some of this marine life as we headed out for the trip. You can find out more about this on the Marina website. 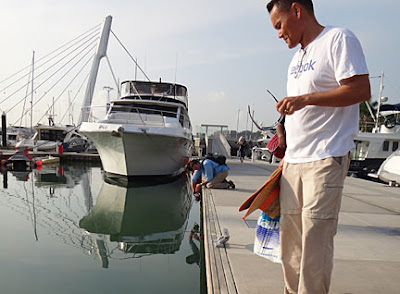 On the way out, once again, we noticed a big white 'cloud' of emissions from the petrochemical plants on Pulau Bukom. 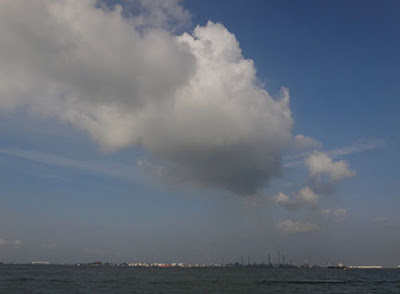 Cyrene Reef is an amazing shore in the middle of the industrial triangle! I'm glad Len and Rudi made the time to have a look at the seagrass situation there.

Tomorrow, they are kindly joining us again, this time with TeamSeagrass to Chek Jawa!
Posted by Ria Tan at 6:50 PM