Usually a rare sight on our other shores, we saw lots and lots of bonnet snails at the remote and inaccessible 'Lost Coast'. 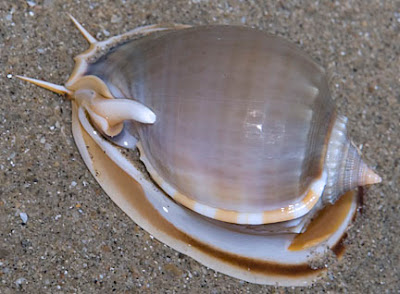 Probably the last large expanse of clean sandy shore on mainland Singapore, it is home to amazing snails, sea stars, slugs and other intriguing creatures!


I started seeing the Grey bonnet snails (Phalium glaucum) even as I waded to the shore. I notice they leave a thin string of slime behind them as they crawl over the sand. Many were buried in the sand, with only their white siphons sticking out. These snails are listed as Endangered in the Singapore Red Data Book, so it's great to see so many of them! 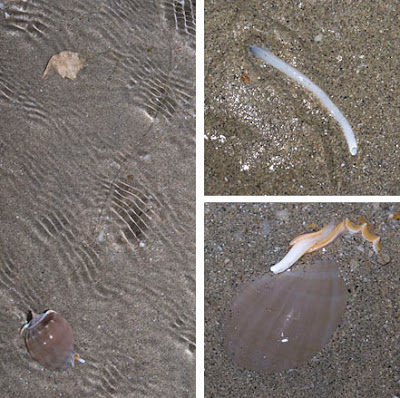 I came across many Bonnet snails eating Cake sand dollars (Arachnoides placenta) which are abundant on this shore. I notice the snail wraps its foot around the sand dollar. I wonder if the sharp spines at the front of the snail's shell helps it get a grip on the flat prey? So much more to learn about our marine life! 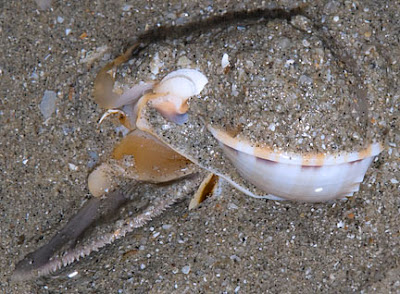 The Laganum sand dollars (Laganum depressum) are quite special. Listed as Vulnerable, we rarely see these on our shores! We saw a few at the Lost Coast, and they were rather small.

There were many different kinds of echinoderms on this shore! We found several Sand stars (Astropecten sp.) including a very large one with an orange underside! I also saw one small feather star, and there were also Common sea stars (Archaster typicus) on the shore. The rest of the team also saw a smooth sea cucumber and Travis found heart urchins. 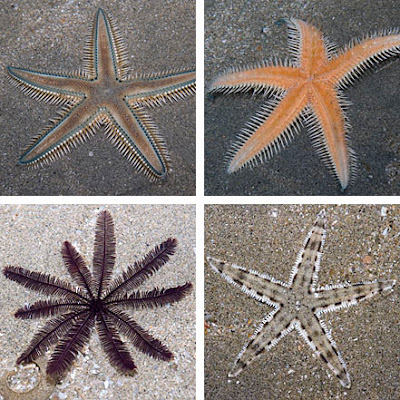 There were lots and lots of Button snails (Umbonium vestiarum) everywhere on the clean sandy shore. As usual, these snails float up when disturbed in the sand in some water. They tend to 'raft' together before the snails start to sink down one by one. I suspect this is how they quickly escape burrowing predators when they are submerged. Of course, at low tide, out of water, this trick doesn't work. But Button snails can also quickly 'leap' many times their body length.

There are lots of hungry predators burrowing in the sand! Here's the trail of one through a patch of Button snails in sand out of water. You can see the tiny trails of the small Button snails leaping out of the path of the bulldozing predator. 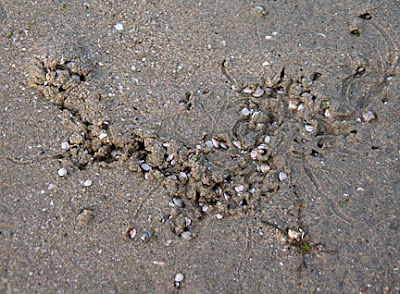 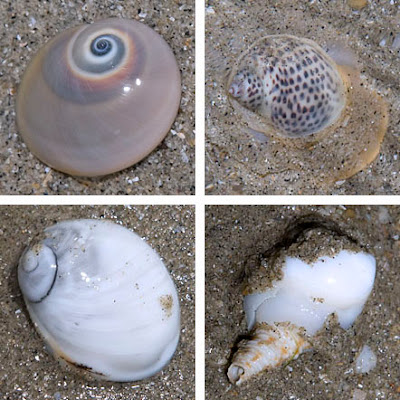 There were also many Naked moon snails (Sinum sp.) which have very small flat shells with a fine texture of lines on the surface. These snails don't retract their bodies into the shell when disturbed. In fact, the shell is often well embedded in the thick rubbery body, so the animal appears to be a naked moon snail. We found out that these snails produced a LOT of slime! And that they can burrow very quickly into the sand. 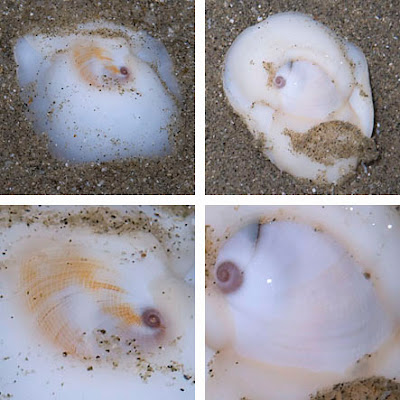 There were many of these strange slugs. I'm not sure what they eat. Kok Sheng has seen this slug before at East Coast Park. Indeed, the sandy stretch at East Coast is quite similar to the Lost Coast. Of course, Chay Hoon found more slugs too! 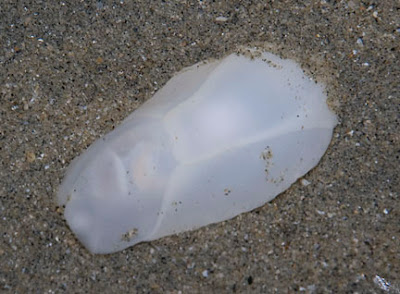 We also saw one Fig snail! Mei Lin, who wrote a paper about this, confirms that it's Ficus variegata. She mentioned that these snails come out at night. So perhaps there were more but we didn't stay late enough to see them. This snail was also seen at East Coast Park! 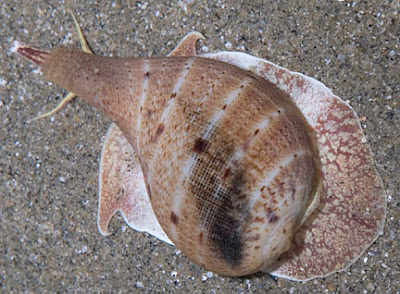 Here's a snail I've never seen before. I think it's some kind of whelk (Family Nassaridae) 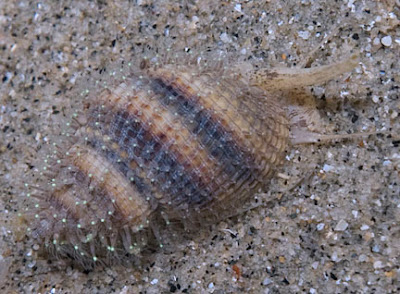 A closer look at the photo (at home) and I realise the snail has lots of tiny things on its shell that look like some kind of cnidarian! The little polyps are neatly arranged on the shell at regular intervals. Wow, what's going on? I have no idea! 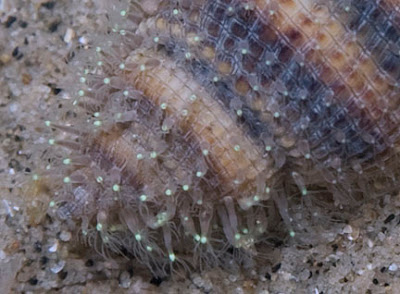 Here's a look at the underside of the snail. The animal has a white body with brown speckles. Wow!

Another strange animal I don't remember seeing before. A large 'hairy' clam with wings on one side.

There were also many small flatfishes in the water, very fast and hard to photograph. I think this one is a Tongue sole (Family Cynoglossidae). The rest also saw a large Peacock sole (Pardachirus pavonina). And there was a dead stingray washed up on the shore.

In the water, I saw one tiny sea pen which didn't look like the usual kinds I see. I also saw a large Plain sea anemone and several swimming anemones (Boloceroides mcmurrichi) stranded on the sand. James also found what looked like a Peachia anemone (Peachia sp.). 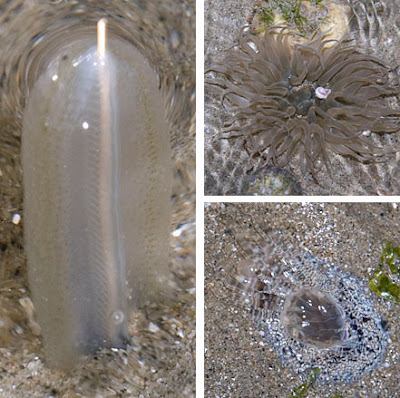 We stayed mainly on the low shore so the shorebirds could still feed on the sand flats. There were lots of them! Subaraj and Con Foley survey the shorebirds here regularly and a few days ago, they kindly invited me to join them. 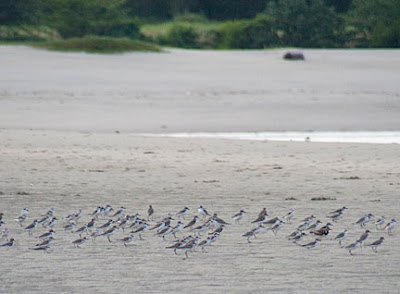 There were small clumps of seaweeds stuck on the few hard surfaces found on the sandy shore. And Travis found a patch of Spoon seagrass (Halophila ovalis)!

Our day began in glorious sunshine as we left the wet weather behind on the mainland! 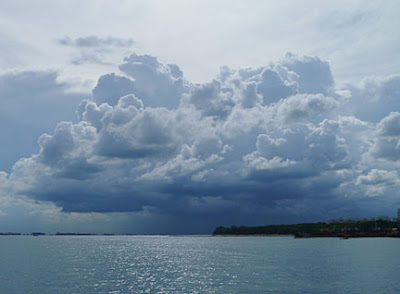 Travis had introduced us to this shore a while back, but to get here, we had to trek kilometers - a Death March! This time, we took the easy way and Jumari got us to the shore! 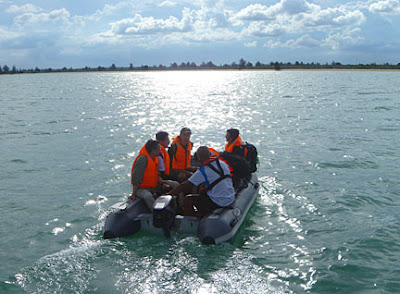 The shore is very wide and shallow, so it was a long wet wade before we got there. It was particularly splashy on the way back! The incoming tide rose up to our waist as we walked a long way back to the dinghy. My waterproof bag sprung a leak and all the camera gear got a little soaked. But fortunately, everything seems to have survived unharmed. Nikon wins! I'm constantly amazed by how my gear keeps working despite the awful way I mistreat them. 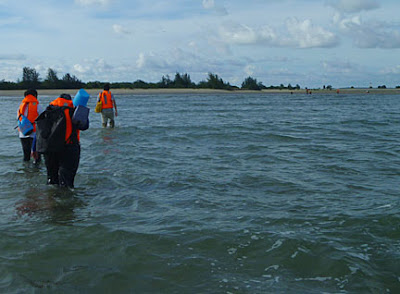 We had spread out all over the wide shore so everyone saw all kinds of different things. I'm sure we'll read more about their finds as they post about them.

We only managed to cover a small portion of this shore and hope to be back to check out the rest soon!