"I was taking a stroll at East Coast Park (Area C/D) on Tuesday, only to discover the horrible mess it is in: Rubbish of all sorts, including plastic bottles, Styrofoam and plastic bags line the coastline" said Vincent Kang in a letter to Today Online 8 Sep 11 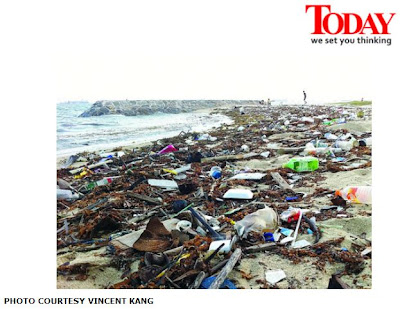 "As I believe that many of the products on the shore are not available locally, the ships anchored in the waters between Singapore and Indonesia must be dumping their waste into the water. Is the Maritime and Port Authority monitoring these ships?" he adds.

Fortunately, in September, the annual International Coastal Cleanup Singapore (ICCS) is due to take place.


This is Area C/D that Vincent Kang referred to (as from the NParks website). The trash build up Vincent Kang saw must have been rapid as the area is smack in the middle of the recreational beaches. 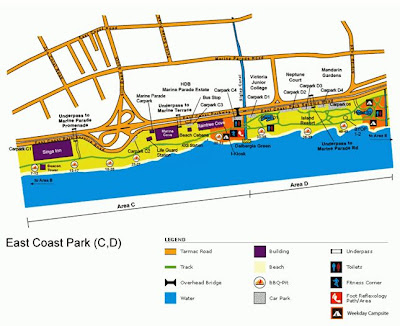 Usually, the recreational beaches are cleaned up by an army of invisible cleaners everyday. So most beach users are not fully aware of the extent of the littering and marine debris issue. 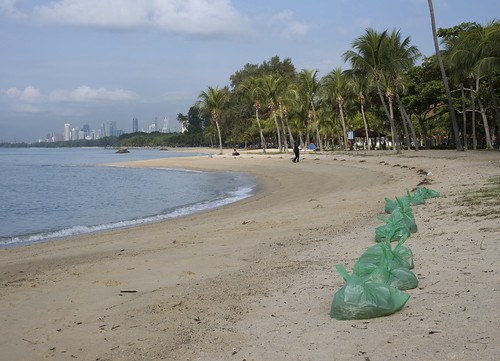 I thought the build up only occurred in more remote shores beyond the recreational beaches. I did notice a similar surge in marine debris at Tanah Merah over the last few months.

Like Vincent Kang, I also noticed that much of the debris did not seem to be local in origin. Many were snack packets and food packaging (e.g., bread, oil) as well as lots of used toiletries such as toothpaste, lotions, shampoo. Most of them had foreign text, probably Malaysian and/or Indonesian.
Andy's survey of these remote shores in Aug 2011 revealed an astonishing amount of trash. Andy's recce is part of International Coastal Cleanup Singapore (ICCS) which will be tackling all trash on all our shores on 17 Sep in their annual exercise.

ICCS is NOT just about picking up litter. It is about educating people and collecting data about the litter on our shores. Like Vincent Kang asked in his letter above, ICCS helps answer the question: where does the litter come from?

ICCS involves thousands of people. It is the single most important event in the year to raise awareness about marine litter. All the shores are targeted. From mangroves to recreational beaches. Remote shore to accessible shores.

Trash on our shores costs us money. More than $1million to be precise. And that's just on the recreational shores. A report for the 21 APEC economies reveals a conservative estimate of damage caused by marine litter to be US$1.265 billion. This is just the cost to fishing and boat industries. This does NOT include costs to wildlife, loss of tourism and lost capital development opportunities, like building a hotel or resort. It also does NOT include the clean-up bill.

Marine debris KILLS! In Jun 2011, a dead sea turtle was found to have swallowed 317 plastic pieces in Australia. Even something as seemingly innocent as balloons, often released in masses during celebratory events, can kill. More about how balloons and soft plastic kill sea turtles slowly and painfully.

You CAN make a difference. Individual sign up is open for 17 Sep 2011 (Sat) 8am - 12pm. More details on the ICCS website with online registration. There was a mass briefing earlier, but no worries if you missed it, the full video is online at the ICCS blog.