Shell refinery fire at Bukom: what natural shores nearby?

Some of our best natural shores ring Pulau Bukom. 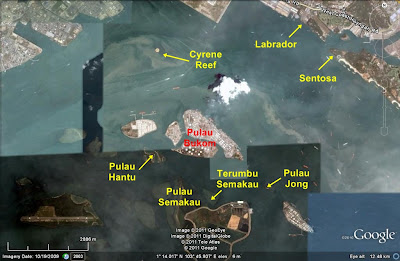 What are some of the potential environmental impacts of the fire that broke out at Bukom yesterday?

Some information taken from mainstream media reports on the fire include the following, including statements by Shell Companies in Singapore chairman Lee Tzu Yang.

More about the fire and responses to it
The fire started at at a pumphouse at about 1.15pm in an open area where there were many criss-crossing pipelines carrying light fuels. Explosions were heard soon after the fire. The fire broke out where finished oil products are transferred from the final production unit into storage tanks by being pumped through pipelines.
The cause of the fire was still unknown and being investigate Initial reports were that the fire was brought under control in about one hour. But by evening, there were reports that it had flared up again and spread. Some reports suggest the fire was eventually contained around midnight. But other reports say the fire continued to rage on Thursday 29 Sep.

The fire and the thick plumes of smoke were visible from western areas of Singapore - such as Pasir Panjang, Redhill and Dover Road - as well as from Sentosa. It was also reported that a dark cloud of smoke could be seen over mainland Singapore and the Jurong Island oil hub, about five hours after the fire started. "The smoke has become much thicker and flames are rising up five to eight storeys every 15-20 minutes," said a Reuters witness
Singapore Civil Defence Force (SCDF) blocked off the pipelines that run through the fire area so that there is no more fresh product. Shell is shutting down the hydrocracking unit which makes diesel and protecting several tanks from heat exposure.

Update 29 Sep noon: Three more explosions heard at Bukom, witnesses saw a 'fire ball shooting into the sky around the time of the explosions'. Two and a half fire engines damaged. More media reports on this.

Toxic by products from the fire itself?
Mr Lee said the substances that were burning were "light fuel products". "They are not toxic and will not create gas clouds," there was "no danger of poisonous vapours when the affected hydrocarbons combust".

Mr Lee said "There will be a continuous process of applying foam pressure ... the operation will continue as long as it takes."

[Fire fighting foam can have toxic impact on marine life]

Environmental impact from the refinery shutdown?
As a result of the shutdown, Shell said the public may see a larger flare, but it is no cause for alarm. Because in a shutdown situation, there would be hydrocarbons that are vented to the atmosphere and you would see a larger than normal flare."

What impact on the surrounding sea?
Mr Lee said the company has taken precautions against any chemicals spilling into the sea. "(We) have deployed booms off Pulau Bukom in the sea to ensure that if in the event, any of this does escape to the sea it will be captured in the booms, and we have boats offshore keeping watch."

What natural shores are found near Pulau Bukom?
Pulau Hantu is the closest, with beautiful reefs that was just visited by the volunteer divers of the Hantu Bloggers this weekend.
Also nearby is Cyrene Reef, a large submerged reef with some of the best seagrass meadows in Singapore. Also natural sandy shores, and reefs.

Also Pulau Semakau which has vast seagrass meadows and reefs.

The lovely submerged reef of Terumbu Semakau I feel has the next best seagrass meadows of our terumbus, after Cyrene Reef.

Although tiny, Pulau Jong is among our last unspoilt islands and is very close to Pulau Bukom.

Further away on the mainland is Labrador and next to it, the natural shores of Sentosa.

Emissions from Bukom can cover a vast area.
Will the aftermath of the fire affect nearby shores? We can only hope for the best.
Posted by Ria Tan at 11:41 AM