There is a stretch of Changi that is usually 'blooming' with colourful sea fans (Order Gorgonacea). Although they resemble plants, these branching organisms are animals, actually a colony of tiny polyps. 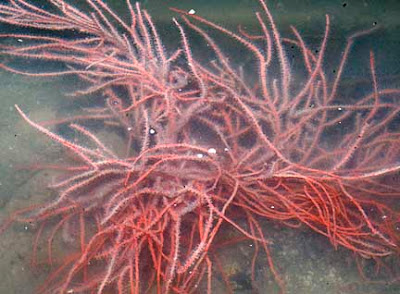 And I found four seahorses sheltering in the sea fans!

Most of the sea fans I saw were orange Candelabra sea fans. I saw much fewer sea fans today both in number of individuals and varieties. There were fewer than our trip in September 2010 and even less than our trip in July 2010. Most of those I saw were small. Many were dead or half dead, covered in scum. 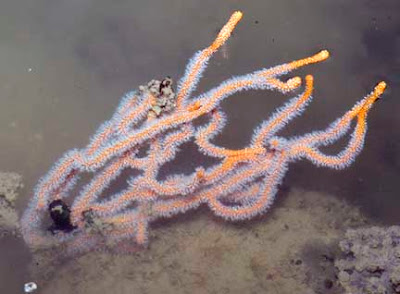 But even a dead sea fan is a good place for all kinds of animals to 'hang on'. In this small dead sea fan, there was a Thorny sea cucumber (Colochirus quadrangularis), a black and white filefish (Family Monacanthidae) and a bright yellow Estuarine seahorse (Hippocampus kuda)  in between them. 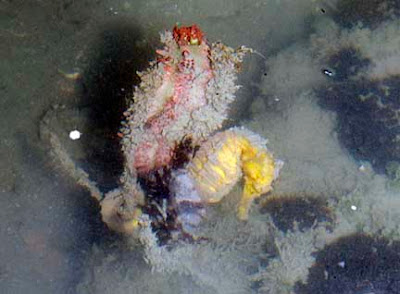 In fact, I found a total of FOUR seahorses sheltering in dead or dying seafans. They are a bit difficult to spot in murky water in the dark. Especially when viewed from its side, the seahorse looks just like another sea fan branch!

The water here tends to be very murky. But in the early morning, when there are few boats running in the area, and at slack tide, it can become quite clear! Revealing all kinds of fishes on the shore! 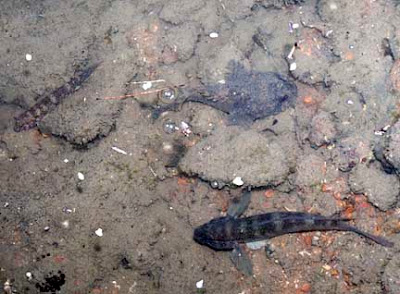 I saw this small boxy fish! I'm not sure what it is exactly as it doesn't quite match the descriptions for any of the common pufferfishes (Family Tetraodontidae) or boxfishes (Family Ostraciidae) that I've seen before. It's amazing how I often see something completely new to me no matter how many times I visit the shores!
Among the abundant fishes were various rabbitfishes (Family Siganidae), lots of different kinds of gobies (Family Gobiidae), little halfbeaks (Family Hemiramphidae), and cardinalfishes (Family Apogonidae). 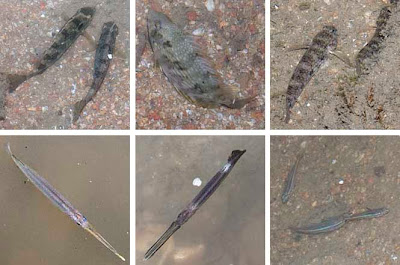 Out of the murky water, a large squid (Family Loliginidae) came up to me, probably attracted by my torch. 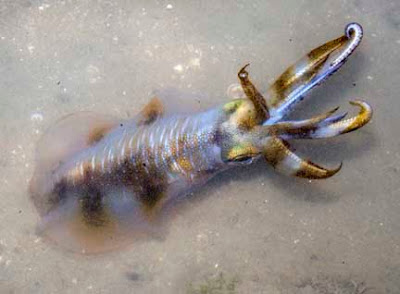 There are also enormous cerianthids (Order Ceriantharia) 'blooming' in the water. These too are animals, a single large burrowing polyp that builds a tube to hide in.

There were also many colourful Slender sea pens (Virgularia sp.)! 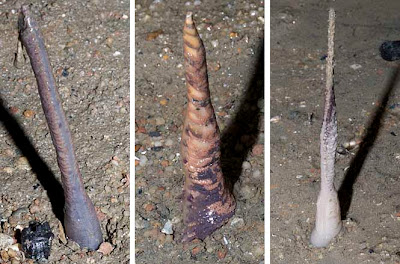 I came across several flowery sea pens (Family Veretillidae) too.

This is among the last natural rocky shores on Changi. On the hard surfaces, there are lots of patches of Zebra corals (Oulastrea crispata) everywhere! 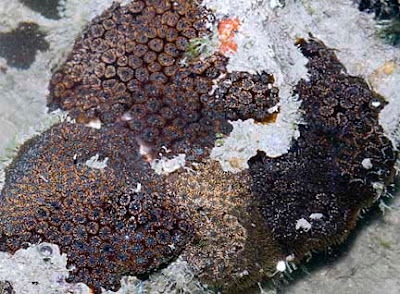 There are also lots of colourful fan worms (Family Sabellidae) on this shore, as well as crabs! 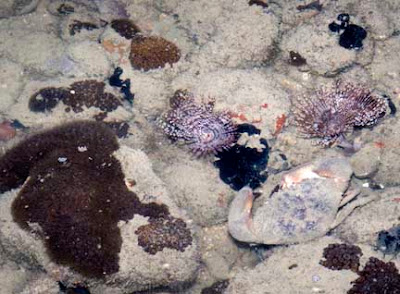 I almost missed this superbly camouflaged crab until I noticed its slender blue and white pincer! I'm not sure but it could be some kind of Sea toad spider crab (Schizophrys sp.) 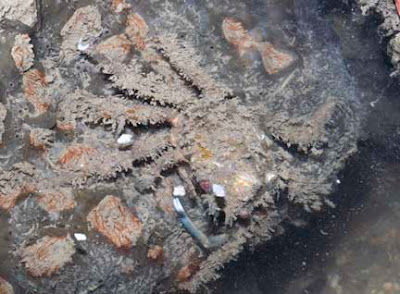 Other abundant crabs include the countless tiny Purple climber crabs (Metopograpsus sp.) that scuttle all over the rocks. Many large Stone crabs (Myomenippe hardwicki) that huddle under stones, several of them were mamas with orange eggs under their bellies. And many different kinds of swimming crabs (Family Portunidae) in the water. 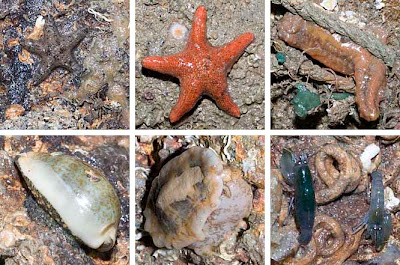 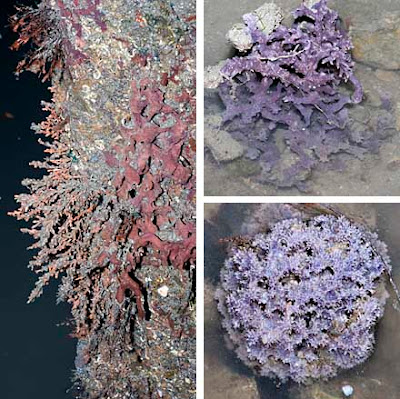 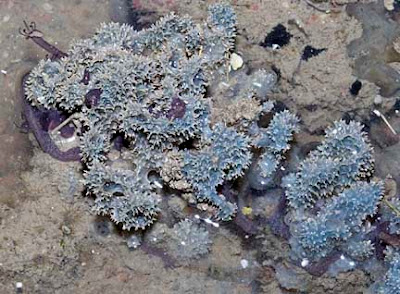 How nice to see a feather star (Order Crinodea) here, something we have encountered on past trips. 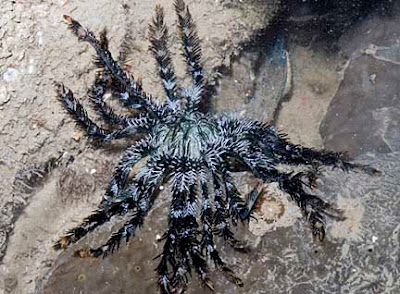 There was an octopus stranded on the high shore in what seems to be a hole too small for it. 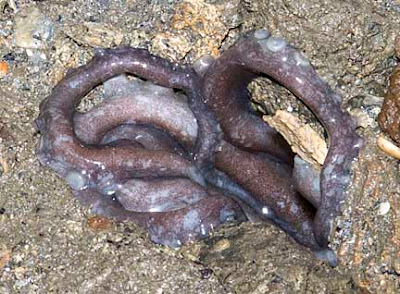 What is that odd red and white thing in the seafan? The sea fan was in deep water, and I only figured it out when I looked at the photo at home. It seems to be a sinker used by fishermen. Oh dear. 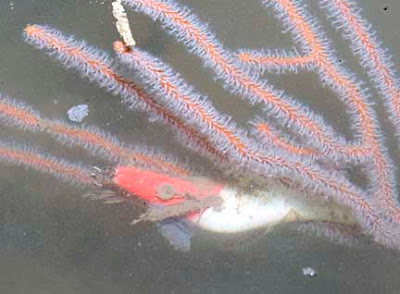 But today, the shore seems mostly clear of abandoned fishing lines. I also didn't come across abandoned driftnets and fish traps, like we did on our previous trip. Fishing is still going on along the shore. As I was leaving, there were already five people getting started fishing with lines, and dropping off fish traps into the water.

The hard surfaces seem rather bare today, and the shore a little quiet. I'm not sure why, but another reason to keep checking up on this shore.
Posted by Ria Tan at 2:53 PM