Mollusc marvels on Changi, and more signs of dugong?

My first time seeing this delightful little snail! It belongs to the Family Cassidae which are merciless predators of sea urchins and sand dollars. One way this snail gets at its prey is to squirts neurotoxic saliva to paralyse the spines. Then the snail sticks its snout through the prey's unprotected anus to eat it. Eeks. 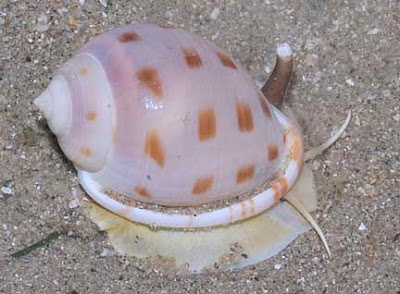 This is the Japanese bonnet snail (Semicassis bisulcatum) which has been seen before on Cyrene Reef by others on the team. I love the way the siphon stick out on the side of the shell so it can snorkel in the sand.

We saw lots of other fascinating molluscs on Changi too!

Another marvellous mollusc encounter, the Baler volute (Melo melo). We saw several today! This handsome snail is listed as 'Endangered' in the Red List of threatened animals of Singapore due to habitat loss. We had in the past encountered this snail being harvested at Changi for the cooking pot. So it's good to know this snail is still seen on Changi. So far, I've only seen this snail also on Chek Jawa and at Beting Bronok. 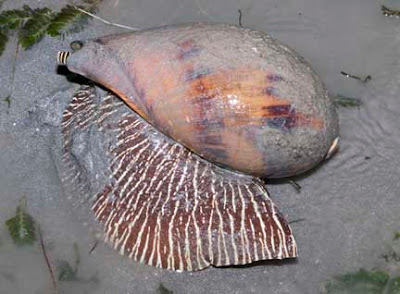 James found the curious Watering Pot shell (Verpa penis). It is actually a bivalve! You can see the tiny pair of bumps on it, all that is left of the 'valves'. This animal is listed as "Presumed Nationally Extinct" on the Red List of threatened animals of Singapore. But a paper in Nature in Singapore (pdf) found that recent sightings suggest this animal is alive and well on our shores. 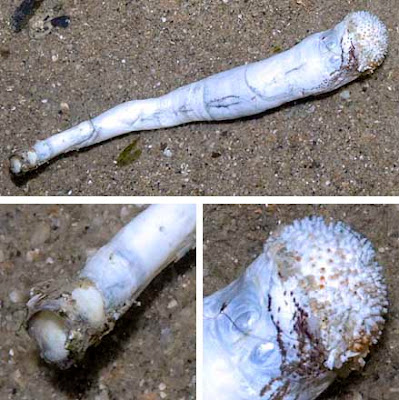 The sand bars were full of Olive snails (Family Olividae)! These snails are also burrowing predators. 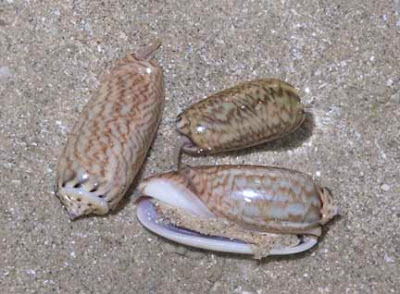 Today, there were many MANY Window pane shells (Placuna sp.) of all sizes. From huge ones the size of small dinner plates, to little coin sized ones and very very tiny ones hardly bigger than a pinkie finger nail! I took a closer look at the living animal, and it seems to have short tentacles around the valve opening. 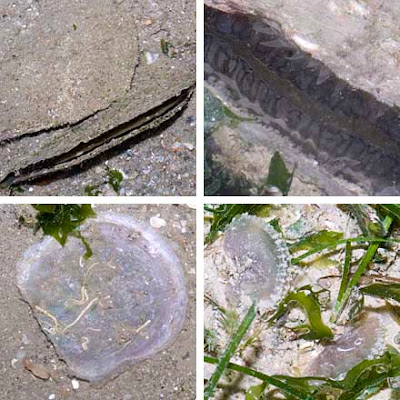 There are also other interesting clams on the shore. Several T-shaped Hammer oyster (Malleus sp.), and lots and lots of Fan clams (Family Pinnidae), many of them seem rather young. When submerged, these clams open their valves very slightly revealing a curtain of lips. Live fan clams are homes to all kinds of encrusting animals. When dead, they shelter animals like fishes and crabs, and also provide a safe place to lay eggs. 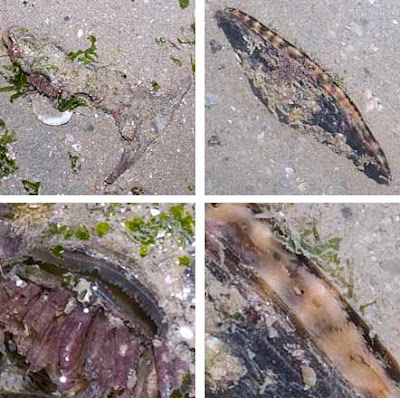 Our northern shores are full of wonderful echinoderms too! Today, large Pink sand dollars (Peronella lesueuri) were incredibly plentiful! I have no idea why we have started seeing so many of them on this shore recently. Kok Sheng remarks this seemed to have happened after the oil spill in May 2010...hmmm. These pink sand dollars now seem to outnumber the Cake sand dollars (Arachnoides placenta) on this shore. 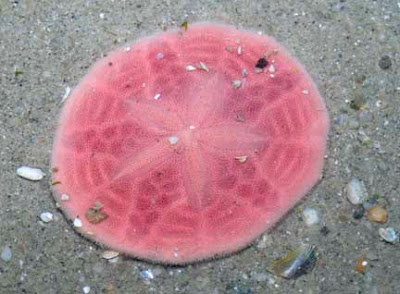 We saw lots of Biscuit sea stars (Goniodiscaster scaber), tiny to small, and some Plain sand stars (Astropecten sp.). Kok Sheng also found an orange Cake star (Anthenea aspera). But this shore is not as 'starry' as the other stretch we visited yesterday. 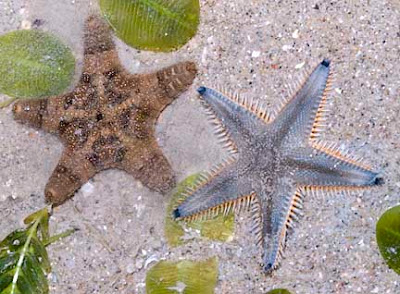 What a nice surprise to see small Knobbly sea stars (Protoreaster nodosus) on this shore! There was one that looked like a miniature version of the adult, and Mei Lin found another that was green. 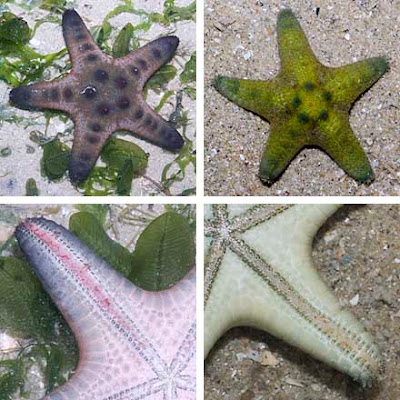 There were lots and lots of White sea urchins (Salmacis sp.) on the shore today. These animals tend to carry all kinds of bits and pieces. But this is the first time I've seen one literally wrapped up in a sand collar! The sand collar is the egg mass produced by a moon snail and contains countless tiny snail eggs. When the eggs hatch, the collar disintegrates. 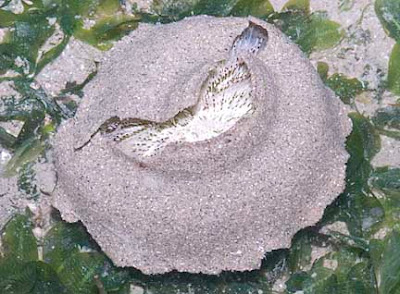 There is an enormous number of Thorny sea cucumbers (Colochirus quadrangularis) on the shore today. Scattered in the meadows and piled up in clusters on hard surfaces. Also surprisingly common today were the Pink warty sea cucumbers (Cercodemas anceps). 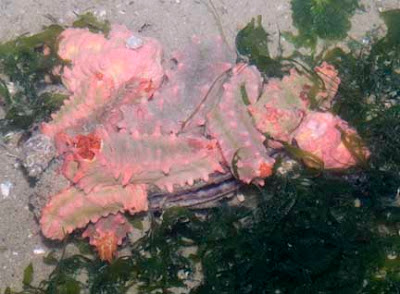 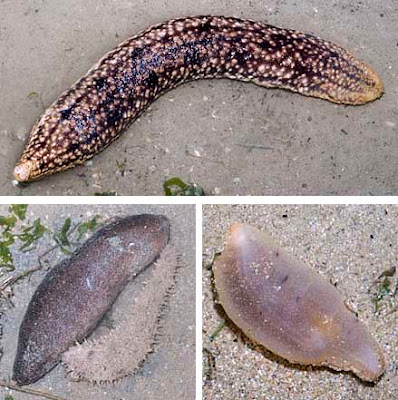 This shore is teeming with all kinds of different animals, often crowded near one another! 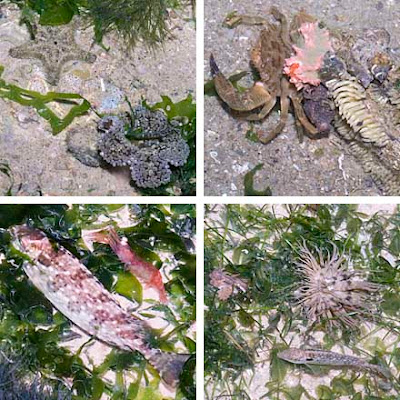 There are lots of fishes in the seagrass meadows! Plenty of rabbitfishes (Family Siganidae) and filefishes (Family Monacanthidae). 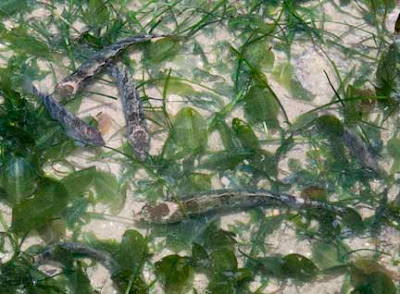 In a pool, we came across many small Mangrove whiprays (Himantura walga)! They were so cute. Ivan thinks perhaps they have just been born? Whiprays give birth to live young! Our seagrass meadows are a nursery for many young animals.

There were lots and lots of Longspined scorpionfishes (Paracentropogon longispinis). I love the thorny flap that this fish has above its mouth. It's hard to take a photo of the fish with this flappy bit expanded. 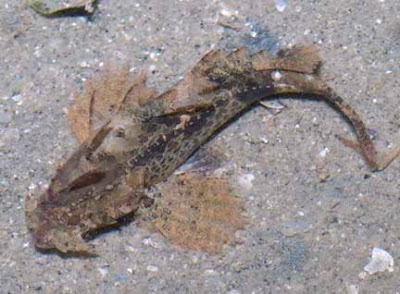 James found a Commerson's sole (Synaptura commersonnii) and Marcus found a funny flounder. But alas, we looked and looked and didn't find any Estuarine seahorse (Hippocampus kuda) here. Oh dear. I hope they are just well camouflaged or have moved to deeper water for this low spring tide.

It's also a very crabby shore. I saw lots of swimming crabs (Family Portunidae) of various kinds. Among the crabs that I paid attention to were these small crabs. It seems to have 'elbow pads'! Hmmm....parasites? 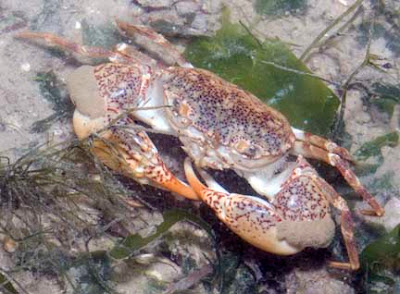 And here's a crab with big bumps on its pincers, and banded legs. I have no idea what it is. 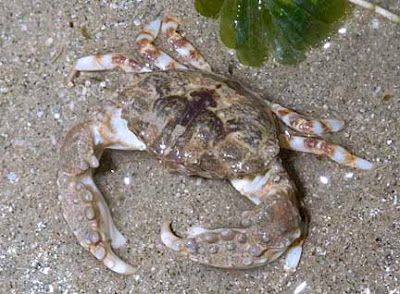 Ivan's wish to see a Box crab came true after the tide came in! We saw this Spotted box crab (Calappa philgarius) on the high shore! The pincers of box crabs are specialised for cracking open snail shells. The snail is gripped in the left pincer which has pointed claws. With the right pincer, which is stronger, the crab cuts pieces of the shell from the shell opening. Once the gap is big enough, the crab can enjoy its snail meal!

There were many hermit crabs of all kinds on the shore. But I found this one fascinating. This Striped hermit crabs (Clibanarius sp.) had settled into a broken shell so that I could clearly see its abdomen and the tiny little legs on the abdomen that hold on the shell. Something we usually can't see!

I was glad to see many medium sized Haddon's carpet anemones (Stichodactyla haddoni) on this shore. Some of them had a pair of Five-spot anemone shrimps (Periclimenes brevicarpalis). But this shore didn't have very many kinds of anemones. Although there were a lot of large Swimming anemones (Boloceroides mcmurrichi), I only saw one Peachia anemone (Peachia sp.) and a few Tiger anemones. I saw only a few cerianthids (Order Ceriantharia). 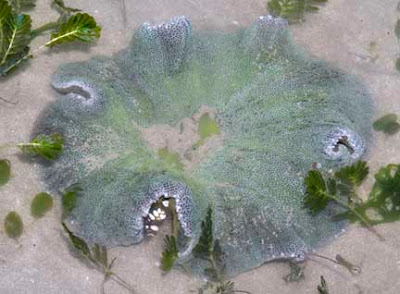 But this stretch of Changi has lots of Sea pencils in the sand bars and among the seagrasses. Sea pencils are a kind of sea pen that I don't see in large numbers on other shores. Sea pens are a colony of tiny polyps. 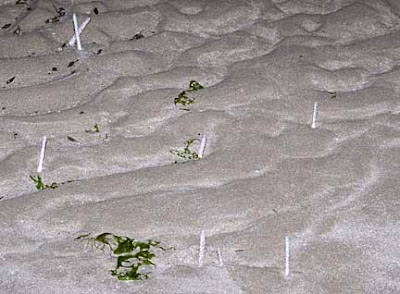 We know the Armina nudibranch feeds on the sea pencils. James managed to find one of these pajama-striped slugs with a bumpy face. 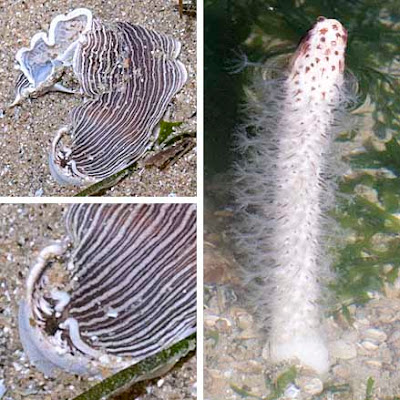 We didn't see any cuttlefishes or octopus. Although there were lots of empty shells on the shore, I couldn't find any living Button snails (Umbonium vestiarum). 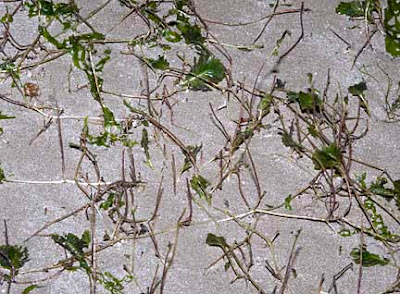 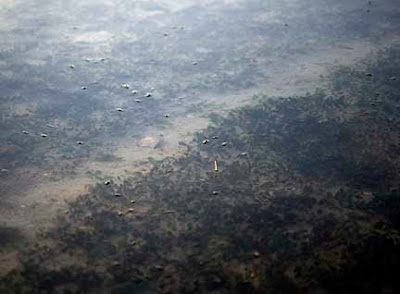 Here's another furrow. It's exciting to think that dugongs might come in to feed on this mainland meadow! 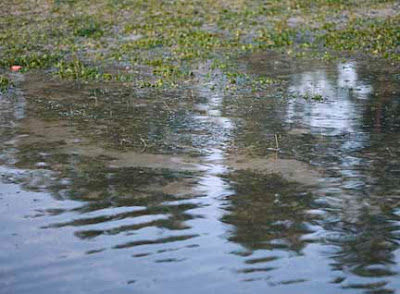 As we ended the trip, I had a quick look on the high shore and found lots of propagules that look like those of the Critically Endangered Tumu berau (Bruguiera sexangula)! Wow! Facing the Johor River mouth and Pulau Ubin and Pulau Tekong (which has lots of mangroves), all kinds of interesting mangrove propagules land on Changi with the tides. 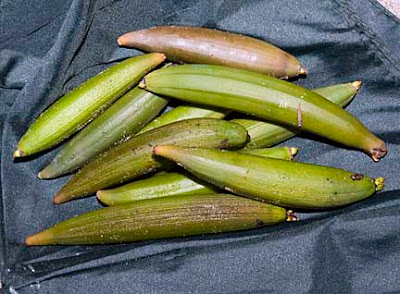 Our last trip to this shore was in October 2010. It seems to be still very much alive!

In a few hours, ANOTHER early wake up call for another trip to another great shore! This time with TeamSeagrass for monitoring at Pulau Semakau.

Other posts about the trip to Changi