I explored a stretch of Sentosa for the first time today. And it's very much alive, with lots of awesome hard and soft corals. 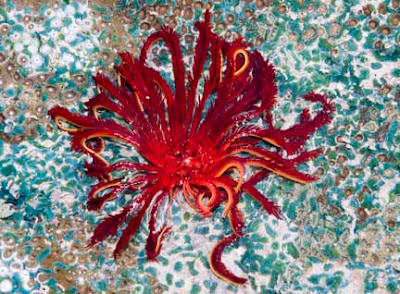 Evidently a good home for special creatures such as this Red feather star!

It's an underwater garden! Although the tide was not very low, the water was quite clear! 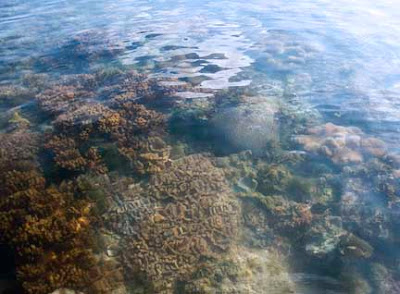 This shore lies just outside the seawalls that border Serapong Golf Course at Sentosa. 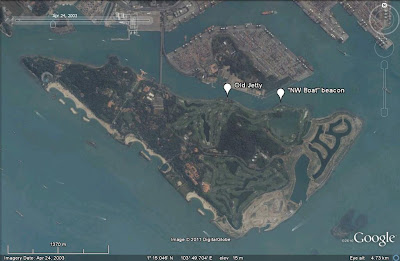 We had a look at the shore at Bukom beacon, but the tide was too high to work there. The shore near 'NW Boat' beacon (as labelled in the MPA Navigation Chart) was more accessible. I managed to walk from there all the way to the old jetty! Although the tide was not very low and passing boats created challenging waves, I managed to get a glimpse of the marvellous shores here in a short two-hour survey. 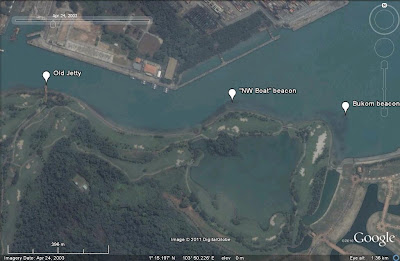 In the rather clear water, I could see all kinds of reef fishes! In this photo, a Copperband butterflyfish (Chelmon rostratus), a Yellow-banded damselfish (Dischistodus fasciatus) and an unknown fish. 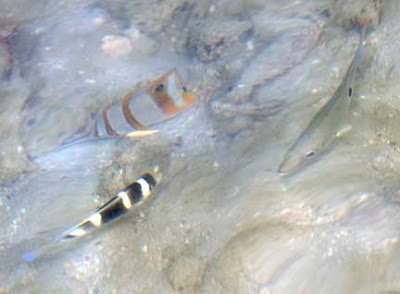 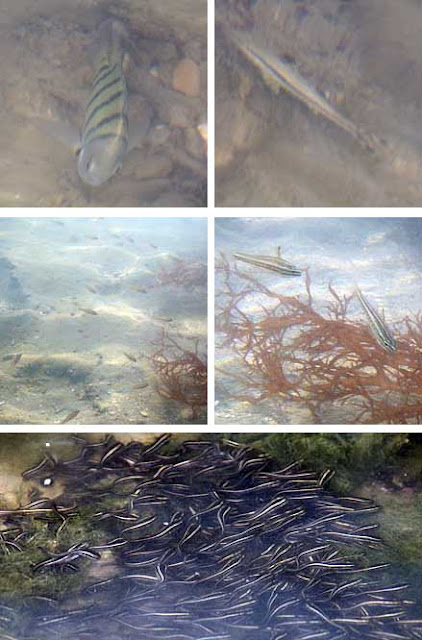 Another special find, a Magnificent anemone (Heteractis magnifica)! So far, I've only seen this anemone on islands further offshore like Kusu, Hantu and Semakau, as well as on the submerged reefs. The water was a little too deep for me to properly check to see if there were 'Nemo's and anemone shrimps in this anemone. 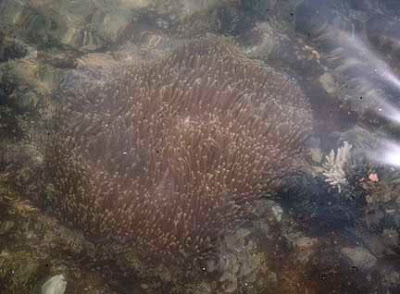 The shores just outside the seawall is encrusted with colourful marine life! 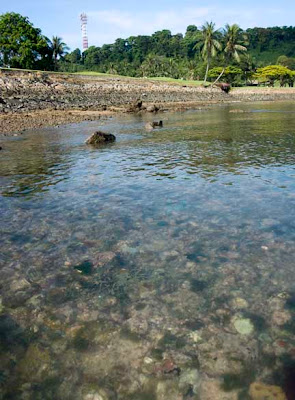 There was an area that was thick with leathery soft corals (Family Alcyoniidae)! 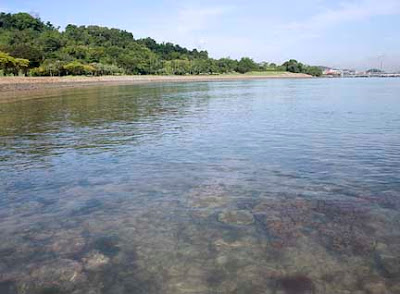 Another look at some of the leathery soft corals. 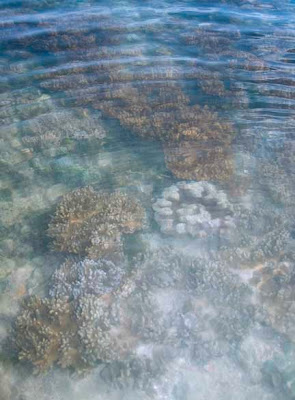 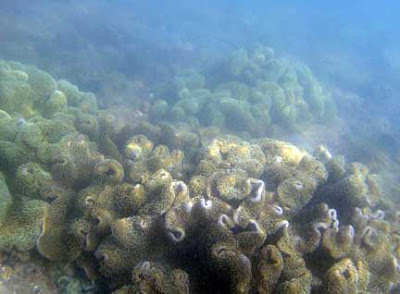 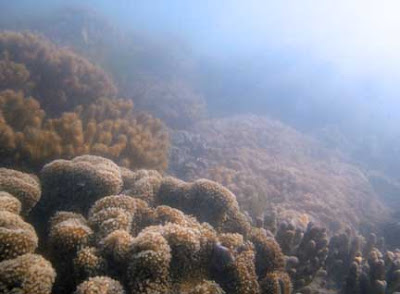 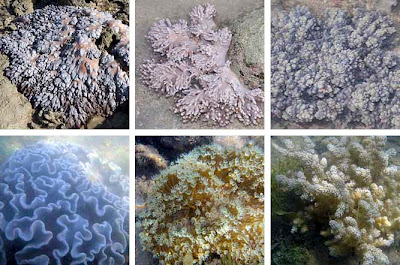 Hard and soft corals crowd one another in some parts of the shore! 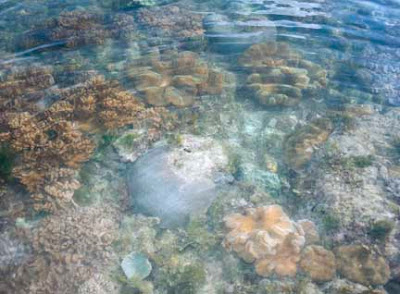 More hard and soft corals jammed next to one another! 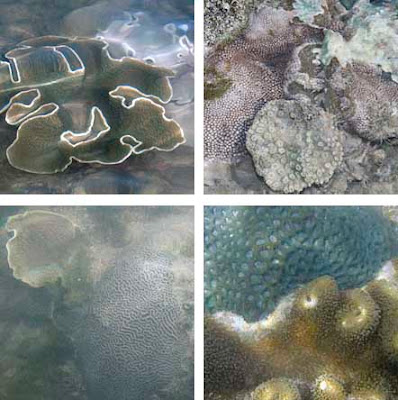 Here's three different kinds of hard corals near one another. 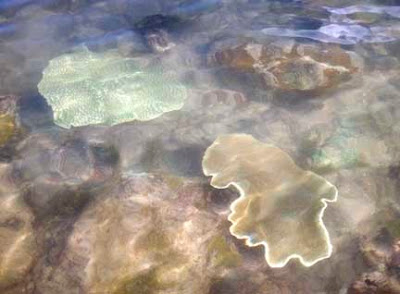 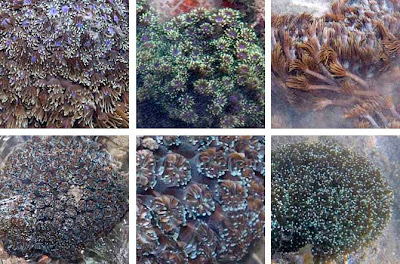 I saw many small to medium sized Cauliflower corals (Pocillopora sp.) and some large Sandpaper coral (Psammocora sp.). All those I saw seemed unbleached. This is great as these two species were badly affected during the coral bleaching last year.

There were also many colonies of Pore corals (Porites sp.).

As with our other reefs, there were many colonies of Favid corals (Family Faviidae). 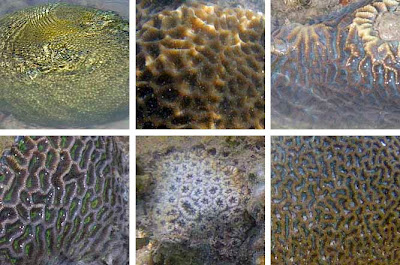 I also saw one cerianthid and also a fan worm!

On the high shore, there were lots of colourful Button zoanthids (Zoanthus sp.), and large clumps of Sea mat zoanthids (Palythoa tuberculosa).

I also saw the usual variety of colourful sponges that can be seen on a good reef. 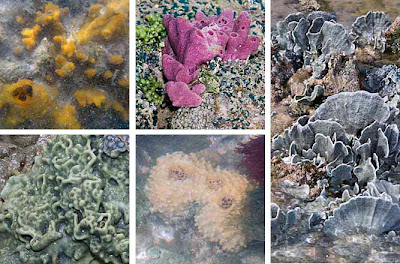 I came across one clump of Tape seagrass (Enhalus acoroides) and there were patches of Sickle seagrass (Thalassia hemprichii) among the corals. Wow, this is great! Seagrasses are an important part of the marine ecosystem and an indicator of shore health. 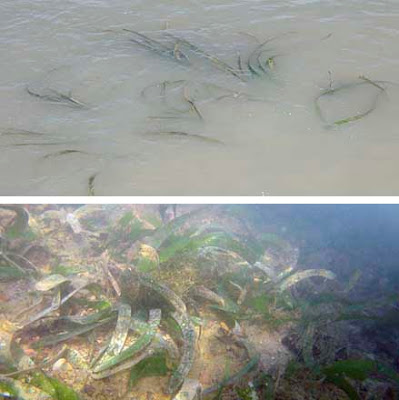 There were lots of colourful seaweeds of all kinds on the shores! Despite the common name, these are not 'rubbish' or 'weeds'. Macro algae, the proper term, are important sources of food and shelter for reef creatures, and some play a role in cementing the reef. 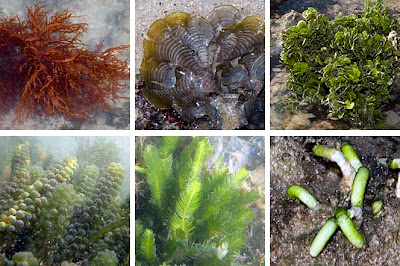 What an amazing variety of marine life! Even on a not-so-low tide, during daylight (more animals are active at night), and working alone. I'm not very good at spotting marine life. I imagine we would see a lot more if we come during a night trip. Especially if the more keen-eyed regular shore explorers came along!

This trip was only made possible by thanks to Sheila and Shao Wei and also Gee Khoon who introduced me to these ladies. Shao Wei turned up even though her foot is still swollen and painful from the stonefish sting she encountered on our last trip to Sentosa's Tanjung Rimau shore. Get well soon Shao Wei! And Sheila brought me there and back and checked on me regularly to make sure I didn't drown. Thank you Sheila! I'm glad such dedicated ladies are looking after these shores!

It is finally the end of a long series of low tide trips. I'm still stunned by the many marvellous marine creatures we saw. Singapore's shores are very much alive!
Posted by Ria Tan at 6:28 PM