Probably the largest collection of native Bakau pasir mangrove trees in Singapore is found in a pond in the middle of Serapong Golf Course on Sentosa! I had the opportunity to briefly visit this area in February. This morning, I had the pleasure of taking a longer, closer look at this natural treasure.

Our native Bakau pasir (Rhizophora stylosa) is listed as Vulnerable in our Red List and small populations are now only found on a few of our shores. Although there are vast stands of Bakau pasir in the replanted mangrove areas at Pulau Semakau, these planted mangroves are from non-Singapore stock. If you look at these Bakau pasir at Semakau, you can see that the leaves are somewhat yellowish. Our native Bakau pasir tend to be more olive, like these trees at Serapong. The bright green bush in the foreground is Sea lettuce (Scaevola taccada). 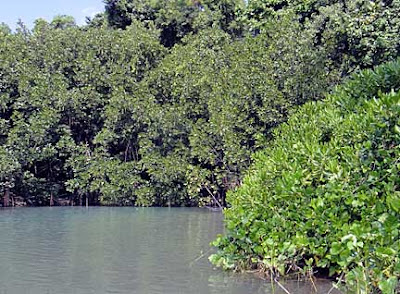 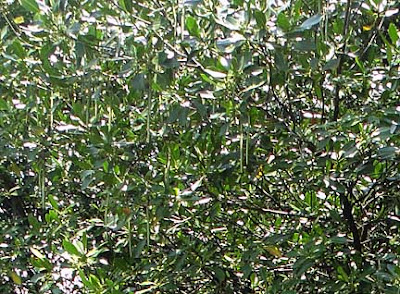 There were lots of seedlings everywhere! Under the mangrove trees and bobbing around in the water in the pond. The seedlings were floating upright, all ready to root down and grow into new trees! 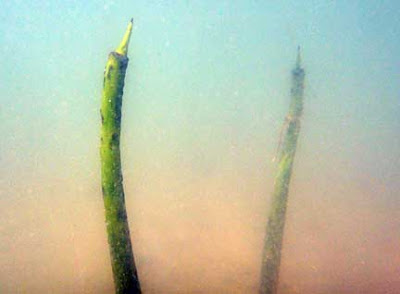 It is thus no wonder that Bakau pasir dominates this pond. With lots of trees large and small settling naturally around the edges. 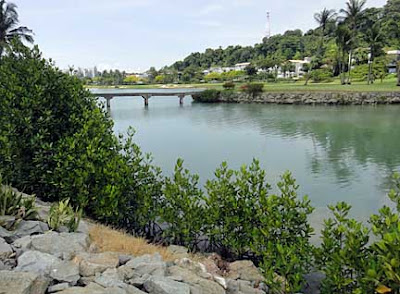 The trees here are mostly quite lush and healthy. With leaves unmarked by insect attack and even short trees were flowering! 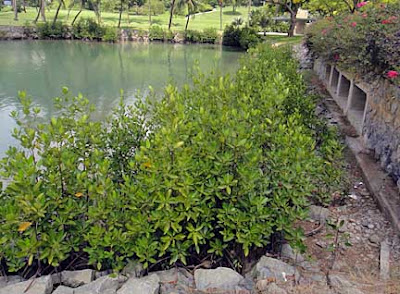 Here's another look at the medium sized Bakau pasir growing here. You can see how tall they are compared to the team member in the photo. 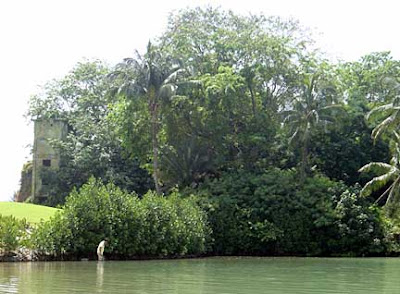 A closer look at the dominant mangrove trees, Bakau pasir is distinguished by the long style (the long skinny thing in the middle of the flower) on flowers that form on branches. There were also many Bakau putih (Bruguiera cylindrica) with their small star-shaped flowers.
I saw one Nyireh bunga (Xylocarpus granatum) and a few Perepat (Sonneratia alba) both large and small. 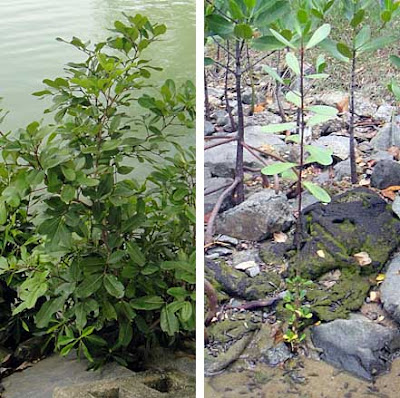 I got a closer look at the mangrove forest here from the inside! The dense canopy over the looping stilt roots of Bakau trees provide lovely cool shade! 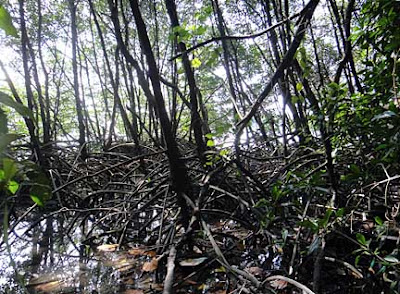 The water beneath the mangrove trees is thick with a layer of quietly decomposing mangrove and other leaves. This is one reason why mangroves store the most carbon than any other kind of forest! 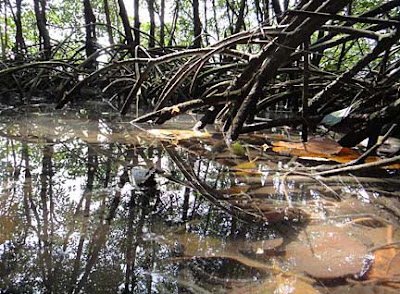 With the clearish water here, I finally get an underwater look at the animals that grow on mangrove roots. Here, some black sponges, and lots of oysters! These filter feeding animals help to keep the water clean. The mangrove trees of course suck up and filter a lot of water. Thus mangrove forests as a whole, naturally clean the water in the pond! 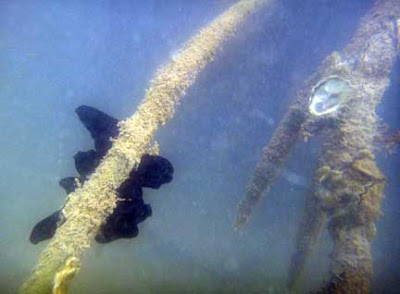 The marine life I saw in the pond is a unique combination of mangrove-sandy shore, northern-southern shore typicals that I seldom see elsewhere. There were some patches of sponges and other encrusting animals growing on the rock wall. 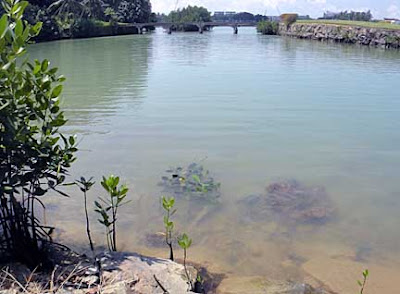 Here's an underwater glimpse of some black sponges. 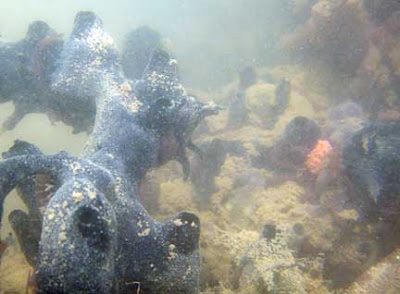 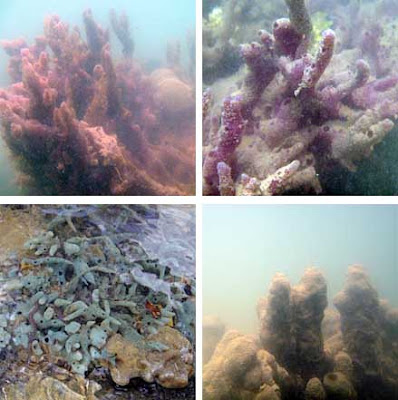 Almost all the sponges were full of synaptid sea cucumbers (Family Synaptidae)! This is the first time I've seen this situation on our Southern shores. Although this is quite commonly encountered on our Northern shores. 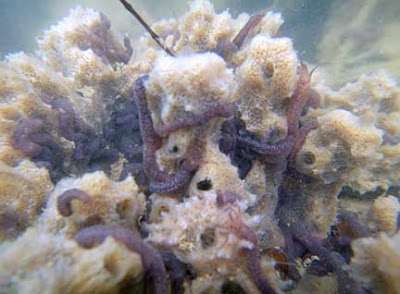 A closer look at these worm-like sea cucumbers. 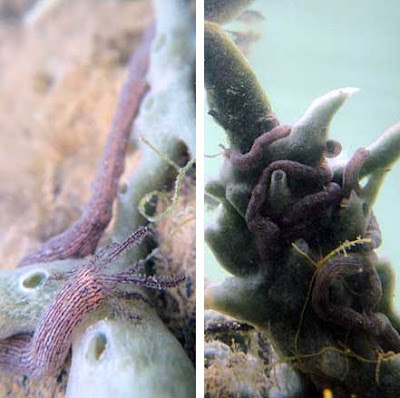 Among the sponges, tiny feathery hydroids (Order Hydrozoa), which are colonial animals.

There were many clusters of these tiny bright pink ascidians. Ascidians are animals that are in the same large group as us humans!

I saw a mixture of rocky shore, sandy shore and mangrove snails! On some sandier stretches, there were lots of Bazillion snails (Batillaria zonalis). 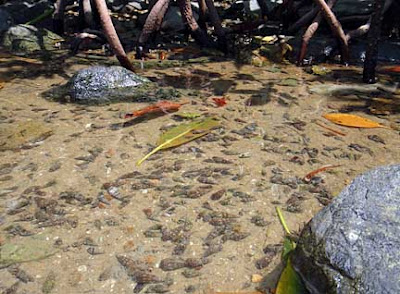 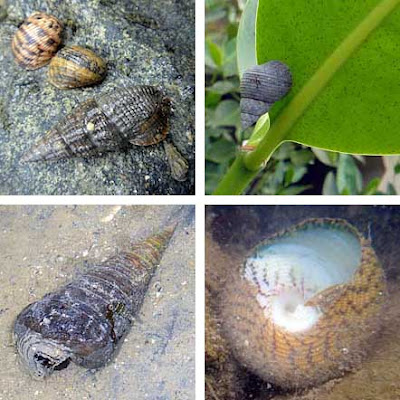 I also saw lots of fishes in the water, although they were hard to photograph with small sneaky camera. There were many small halfbeaks (Family Hemiramphidae), some tiny archerfishes (Family Toxotidae), small mudskippers (Family Gobiidae) of various kinds and lots of cardinalfishes (Family Apogonidae). 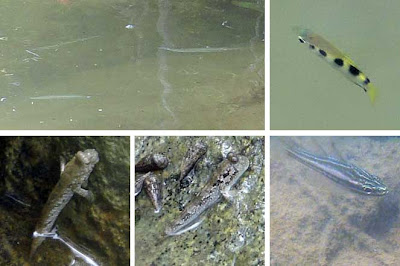 I saw this delicate soft, balloon-like thing that was attached to the soft mud and formed a light-bulb shape underwater. I saw similar blobs in the mangroves during the Mega Marine Survey at Sungei Pandan mangrove. Dr Tan Kok Siang had explained that those were eggs of some kind of sea slug. 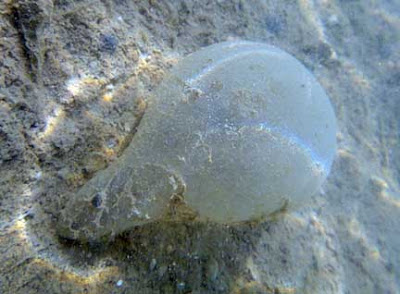 The mangroves grow around this fascinating heritage site called Berhala Reping which has been preserved by the Sentosa Golf Course. 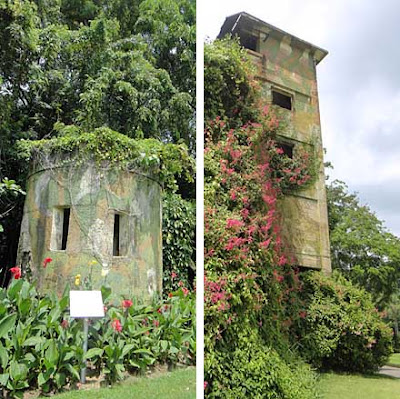 The information provided by Sentosa Golf Course is fascinating.

Built in 1890s by the British military, Berhala Reping was originally a small island and served as a heavy gun battery.

For eight days from 20 Feb 1942, hundreds of Chinese civilians, bound hand and foot, in groups of four, were transported by boats from nearby Tanjong Pagar Docks to the waters across from here. There, Japanese soldiers hurled the bound civilians into the water and opened fire on them. Many bodies drifted ashore along the outer coastline of the then Blakang Mati (now Sentosa) island. Some 300 bodies were then buried by British prisoners of war around the Berhala Reping artillery post.

The dead were among tens of thousands who lost theirlives during the Japanese' Sook Ching operation to purge suspected anti-Japanese elements within Singapore's Chinese population between 18 Feb to 4 Mar 1942.

The forts on Sentosa were decommissioned after the last British troops departed in 1967. Today, the prominent observation towers of Berhala Reping remain untouched and continue to fascinate the unsuspecting golfer on the Serapong course.

Oh dear. Rest in Peace to the unfortunates buried here. Well certainly, the area is now very peaceful. And it is a special site for our natural heritage too!

Thank you to the people who made it possible for me to visit and have a closer look!
Posted by Ria Tan at 11:06 PM