Mangroves on an artificial seawall at Pulau Hantu

Today, I return to Pulau Hantu's amazing mangrove trees that have settled naturally on an artificial seawall. 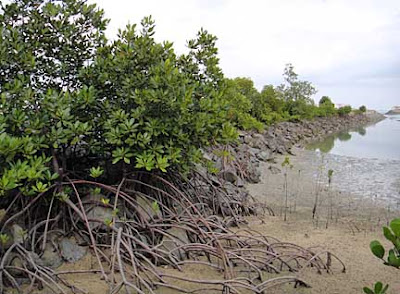 I had earlier noticed this in Apr 09 (although they were probably growing there much much earlier). And I had a quick look at them with NParks friends on our many-island tour a few days ago. Today, Hui Ping from Sungei Buloh Wetland Reserve came along to have a closer look at the mangroves.

There is an amazing variety of mangroves growing on this seawall. And they are quite tall and well grown too! On our trip, the different kinds of mangrove trees we saw included common ones like Api-api bulu (Avicennia rumphiana), Perepat (Sonneratia alba), Nyireh bunga (Xylocarpus granatum), Bakau putih (Bruguiera cylindrica), Tumu (Bruguiera gymnorrhiza), Bakau kurap (Rhizophora mucronata). As well as those listed as Vulnerable on our Red List such as Tengah putih (Ceriops tagal) and Bakau pasir (Rhizophora stylosa).
The Tengar putih here are doing particularly well, looking healthy and producing lots of flowers and very long propagules. The Perepat on the wall is also blooming nicely.
Hui Ping points out that the structure of the wall may have helped to allow the mangroves to settle there naturally. While the top part of the wall is sealed and smooth (the gaps between the rocks filled up with cement), the lower part of the wall is made up of unsealed boulders and rocks. Wow, perhaps if we built our seawalls with mangrove colonisation in mind we can have lovely green seawalls in Singapore!
Besides the big trees growing on the seawall, there are also lots of little mangrove trees settling in the lagoon. Hopefully, they will be allowed to grow up. 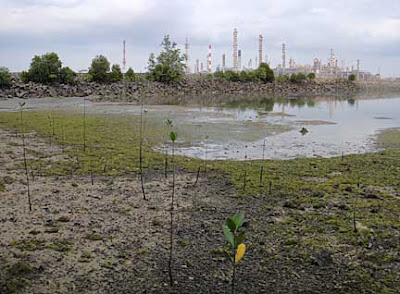 There are also little mangrove trees settling in the lush 'meadow' of Gelang laut (Sesuvium portulacastrum) that cover the high shore. It would be great to eventually have a little mangrove forest on Pulau Hantu!
On the other side of the mangroves on the wall are the massive petrochemical installations on Pulau Bukom. In the water on the outside of the seawall are coral reefs!
With a mangrove forest, Pulau Hantu will then be one of the few places in Singapore where a nice range of shore ecosystems exist in a continuum as they are meant to be. Mangroves, seagrass meadows and coral reefs!
Besides the mangroves on the seawall, there are a few large mangrove trees on the high shore of Pulau Hantu Besar. One of them is a very large Perepat (Sonneratia alba). Is it big enough to qualify for consideration as a heritage tree? That would be awesome! 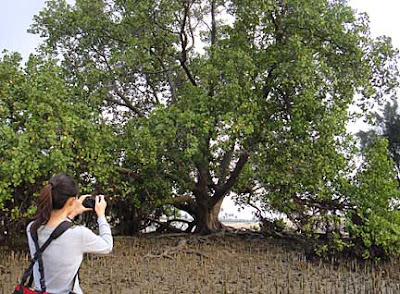 Mangroves seedlings probably settled naturally on the seawall by floating in with the high tide. Sadly, nowadays, trash also floats in forming a row on the high tide line. 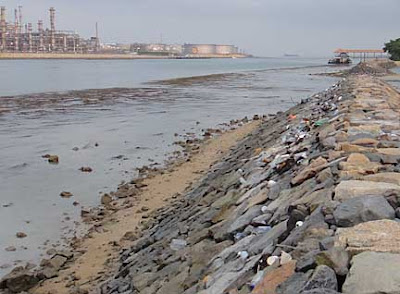 When we arrived, the first thing we noticed was a ring of plastic floating trash that probably circles the island. 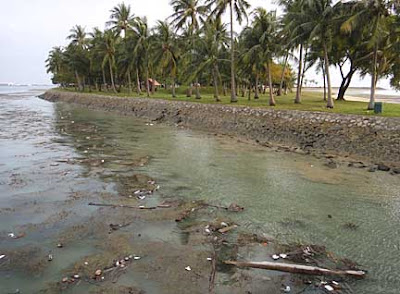 The naturally settling mangroves on Pulau Hantu sure can teach us a lot about how we encourage regeneration of nature. Hopefully, these precious tenacious plants will be appreciated and allowed to grow.

After the quick mangrove exploration, I headed down to the shore to check out the coral bleaching situation at Pulau Hantu.
Posted by Ria Tan at 10:10 PM