How is coral bleaching at Pulau Hantu?

It's always a delight to see 'Nemo' or the clown anemonefishes on our shores! 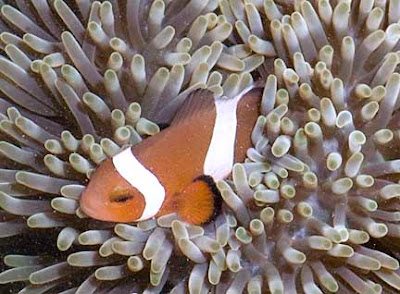 And at Pulau Hantu, we have a pretty good chance of seeing them even at low tide. The False clown anemonefishes (Amphiprion ocellaris) on our shores live in the Giant carpet anemones (Stichodactyla gigantea).

The anemones usually have more than one clownfish! Today, the water was quite high. Which is not very good for looking at other marinelife, but this means the clown anemonefishes were in water and out and about, playing among the tentacles of the anemone, instead of hiding away from view. 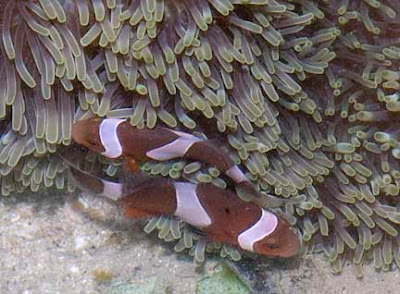 Here's a rather bad video clip I took of the anemonefishes.

On Pulau Hantu today, it was a relief to see many large hard corals that were not bleached. 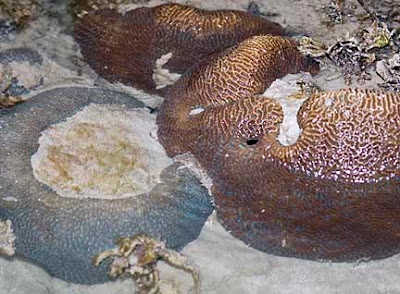 There were also many small hard corals looking well. This cluster is growing in the middle of the 'bald' patch of a larger hard coral. Compared to our most recent trip in July last year, I didn't see any bleaching corals. My sense during this trip, though, is that there are fewer corals than usual. Suggesting that perhaps not all the Hantu corals survived the bleaching. But the tide wasn't very low and much of the reefs were covered in a thick growth of Sargassum seaweed (Sargassum sp.) so we couldn't explore much of the reef. 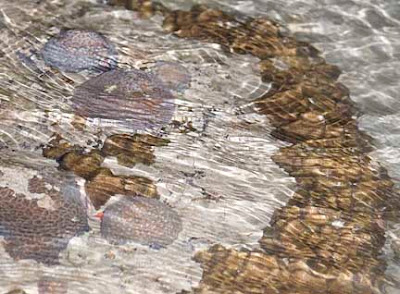 There were many brightly coloured and healthy Favid corals (Family Faviidae) both large and small. 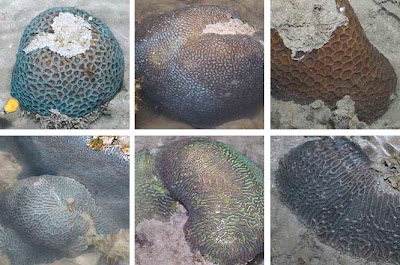 I saw a few small unbleached colonies of Anemone coral (Goniopora sp.), one small colony of Disk coral (Turbinaria sp.), many Pore corals (Porites sp.) branching and boulder, and something that might be a Brain coral (Family Mussidae). I saw one Sunflower mushroom coral (Heliofungia actiniformis) but didn't see any Circular mushroom corals (Family Fungidae). 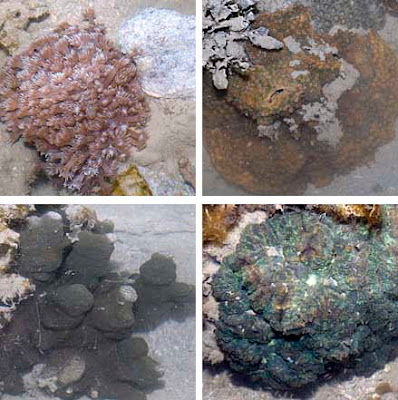 There were quite a few healthy and happy Galaxy corals (Galaxea sp.). There seems to be different kinds of Galaxy corals on Pulau Hantu. Kok Sheng checked out the 'meadow' of Galaxy corals that we used to see before the bleaching incident and he says they seem alright. 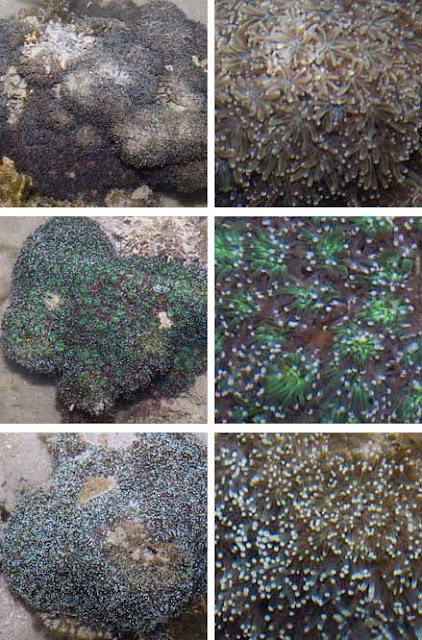 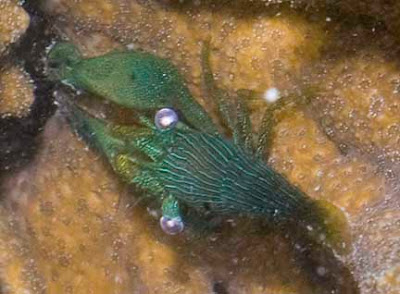 The only crabs I came across were Flower crabs (Portunus pelagicus) small and large, as well as other kinds of Swimming crabs (Family Portunidae). But the rest of the team saw many different kinds of crabs. 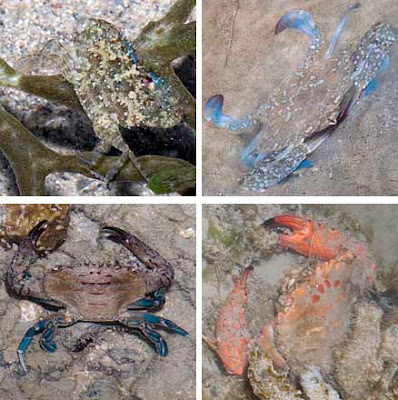 On the narrow shore facing Pulau Bukom, the large leathery soft corals (Family Alcyoniidae) there seem alright. Although they appear much smaller than usual. 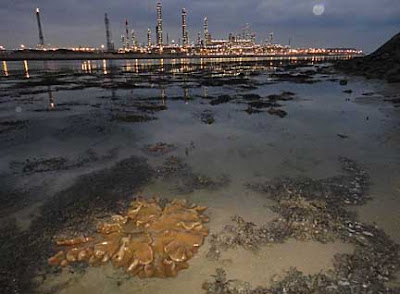 Not too many snail sightings on the reefs, although there were lots of snails on the seawall. A well camouflaged Spotted top shell snail (Trochus maculatus) grazing on seagrass, and a pair of Cat's ear pyramid snails (Otopleura auriscati) which seem to be mating? Kok Sheng checked on and found the Burrowing giant clam (Tridacna crocea) to be alive and well. Hurray!

The only nudibranch I saw today was a very large Discodoris boholiensis. But the rest of the team saw some other slugs too. 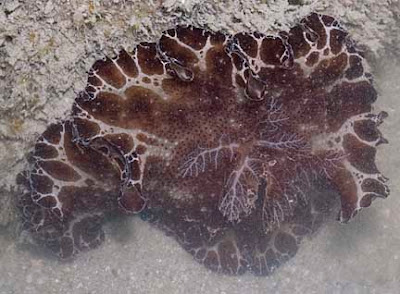 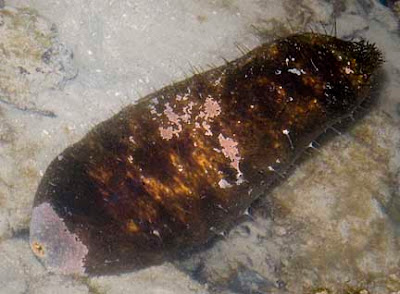 There were many large living healthy sponges, although some of the Yellow prickly branching sponges (Pseudoceratina purpurea) had bluish tips. There was a large thick pink sponge (Callyspongia diffusa), lots of bright Orange sprawling sponges (Clathria reinwardti), some dotted with hairy olive sponges and many clusters of bright green tangled sponge. 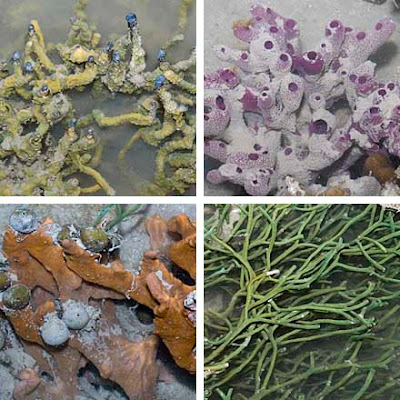 These odd slits embedded in different kinds of sponges I think are some kind of clam. I'll have to read up about this. There's always MORE to learn about our shores!

There were all kinds of fanworms (Family Sabellidae) on the shore too. The rest of the team saw some flatworms too.

Alas, there are signs on irresponsible fishing on the shore.
There was an abandoned driftnet but it was so old that is now encrusted with marine life and has become a part of the ecosystem. So we left it there. 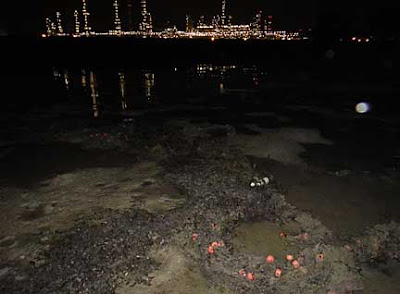 We also bumped into some bio students doing fieldwork on Pulau Hantu. It's good to know that our shores are being studied as there's so much to learn and do for them.

Earlier on, I had a quick look at the mangroves growing on the seawalls at Pulau Hantu.