For the third year in a row, Pasir Ris water quality failed. Tests showed "too many samples containing unsafe levels of the enterococcus bacterium (found in animal and human faeces)." 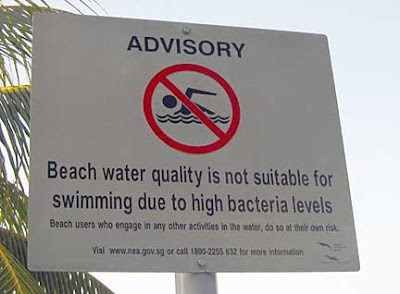 Where is all this bacteria coming from?

When Pasir Ris water quality first failed in 2008, a study was conducted to find out the cause.

In 2009, when Pasir Ris water quality failed again, NEA said this was due to "several factors, including minor leaks from older sewers and discharges from small-scale sewage treatment plants and low water currents in parts of Pasir Ris beach are not effective in diluting and dispersing discharges."

NEA said 23 kilometres of aging sewers in the area would be mended by 2011 and 39 small scall sewage treatment plants in areas such as Tampines and Changi would be phased out in 2012.

Other contributors include "waste dumped from moored vessels and animals secreting waste into the waters."

This year, the cause is again attributed to "proximity of smaller sewage treatment plants in Tampines and Changi" and "currents off Pasir Ris Beach were not strong enough to carry the discharge out and disperse it at sea" and "some older sewage pipes which may also be leaking untreated sewage."

Besides the PUB measures to phase out old sewage treatment plants and mend leaky sewage networks, the NEA is also working with the Maritime and Port Authority to make sure ships moored offshore do not discharge sewage directly into the water.

Could anything else be causing the high levels of the enterococcus bacterium at Pasir Ris?

Let's have a look at Pasir Ris beach (at the lower portion of the blue box). It lies opposite Pulau Ubin. 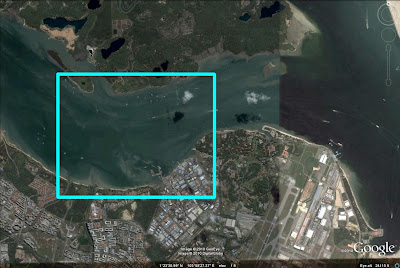 Here's a closer look at the area in the blue box. In the pink circles are lots of floating fish farms. From media reports, there are possibly as many as 51 fish farms in this area. That's a lot of farms, a lot of fish, and possibly a lot of humans on the farms too? 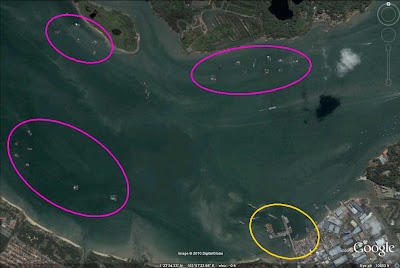 And in the yellow circle is the shipyard at Loyang. Here's a look at the Loyang shipyard from Pasir Ris beach. 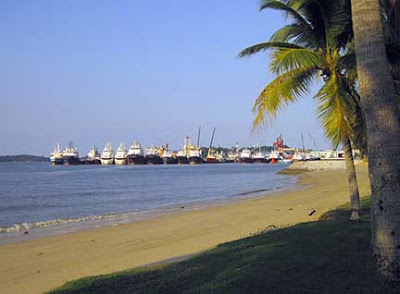 The ships are parked quite close to the shore, this is a view at a moderate low tide. 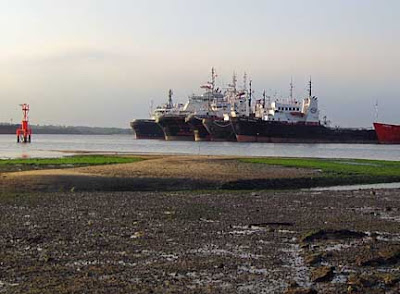 The fish farms are also located quite close to Pasir Ris beach. 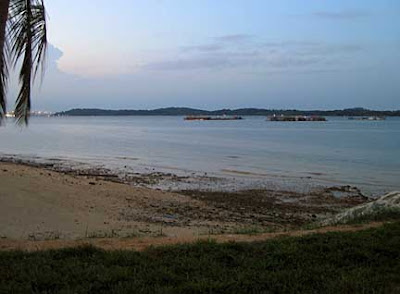 Why are the fish farms and shipyard not mentioned as variables affecting water quality at Pasir Ris? Do the fish farms contribute to enterococcus bacterium levels?

I don't know. [Update: But Kwok Chen Ko does and he shares on his blog post. He says fish don't contribute to enterococcus bacteria. Thanks Chen Ko!]

But a study showed that fish farms may affect water quality in terms of oxygen levels: "Faeces and uneaten food pellets from fish farms alter the organic matter in the sediment, which can change the consumption of oxygen and cause local 'dead zones' (eutrophication)".

And there was mass fish deaths at Pasir Ris in Dec 09 due to low oxygen levels. 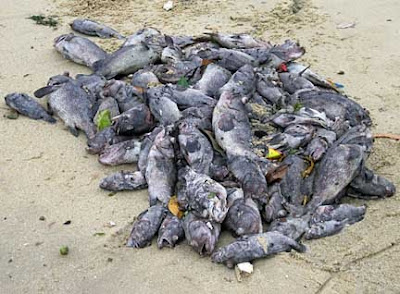 The study indicates that seagrasses may moderate the impact: "the presence of seagrass and the large number of wildlife it attracts could mask the impacts of fish-farming by providing a buffer against the organic matter from the farms reaching the sediment and therefore affecting the meiofauna."

Sadly, the seagrasses at Pasir Ris have been affected by the massive beach construction since Nov 09 and which is supposed to have finished by Aug 10. 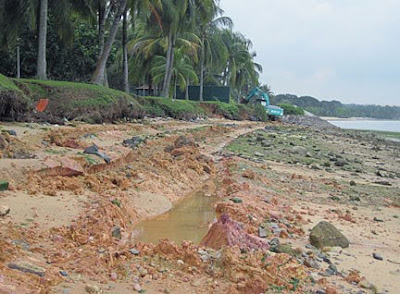 The construction barge lands on the shore at low tide (rather indiscriminately it seems) affecting the seagrasses growing there. 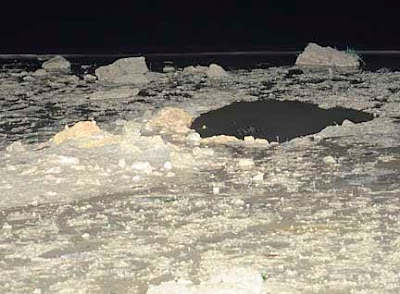 Yesterday, I saw a great deal of trash on Pasir Ris, as usual. Some of the packaging on the shore doesn't look like they were disposed by recreational beach users. Things such as detergent packaging probably came from where people wash things. The fish farms? Ships? 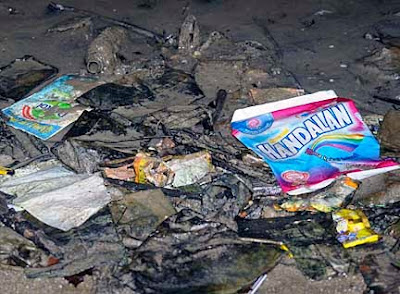 Yesterday, I noticed a line of floats behind the barge on Pasir Ris. I'm not sure what is going on. 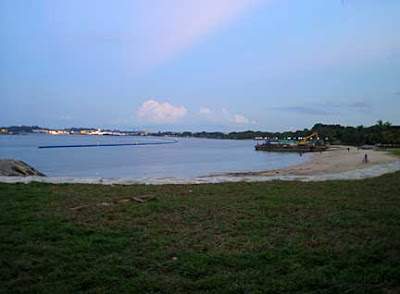 To me, the waters between Pasir Ris and Pulau Ubin resembles a giant toilet bowl, without a flush.

As NEA itself says "low water currents in parts of Pasir Ris beach are not effective in diluting and dispersing discharges".

Despite this sad situation, in my short trip to Pasir Ris yesterday, I still saw marine life on parts of the shore, and checked up on some special mangrove plants too.