Now online: "A Preliminary Checklist of the Molluscs of Singapore"

Tan Siong Kiat and Henrietta P. M. Woo have provided this wonderful list which is now online for download at the Raffles Museum of Biodiversity Research website! 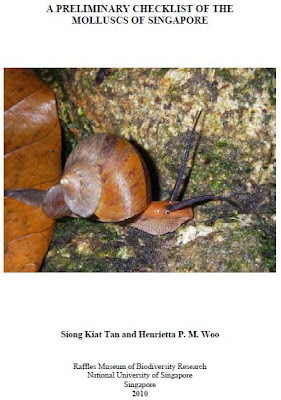 It includes all kinds of molluscs: those with shells and those without. Snails, clams, slugs (nudis! and more) and octopuses and 'sotong'. Awesome!

The authors also explore the tricky issue of dead shells on our shores. They say "Unlike most parts of the world where empty shells found on the beach are an explicit indication of a species' presence, shells found on Singapore beaches may not be unequivocal evidence of occurrence." This is of course because many of our shores are reclaimed with sand from other parts of the world.

The authors share interesting findings on this, such as: "Shells of many species are evidently extrinsic, such as those of Turbinella pyrum and Busycon sinistrum, both of which have been found at Changi. These are definitely not from this region and are known to be used in religious rites by the Hindus."

At the same time: "Live animals have since been recorded for some species whose shells are quite common in reclaimed areas but were initially thought unlikely to occur locally. Some examples are Phalium decussatum, Polinices powisianus and Xenophora solarioides."

It also includes a very useful list of mollusc publications.

The authors end by saying: "Other than being a source of information for research purposes, we hope this list will inspire interest in molluscs and thereby setting the stage for more work on the monitoring and documentation of the molluscan diversity in Singapore."

Indeed it has inspired me to take a much closer look at our fascinating molluscs!

For example, it seems the Pink moon snail we've been seeing so often on our shores is probably Natica zonalis! 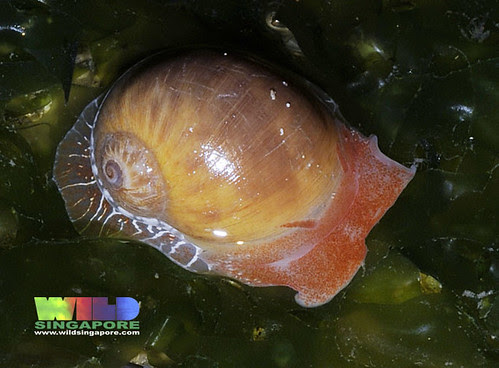 Thank you Siong Kiat and Henrietta for a great list!