Today at Pulau Tekukor there were many signs of coral bleaching. 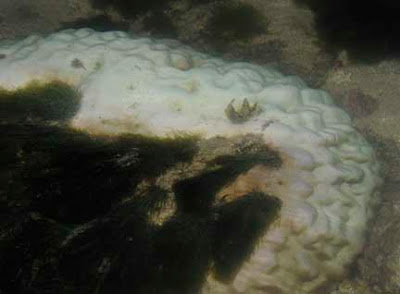 What does this mean?

Corals bleach when they are stressed. The bleached coral on the left was turned upside down! Obviously a stressful position for a colony of animals that rely on tiny little plants inside their bodies to make food from sunlight. I turned the coral over after taking the photo. I have no idea how this large coral could have been overturned. 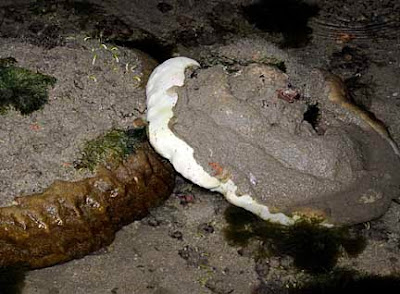 Some corals that have been overturned continue to grow. This Flowery disk coral (Turbinaria sp.) seems to be managing, and is not bleached, so I didn't turn it over. 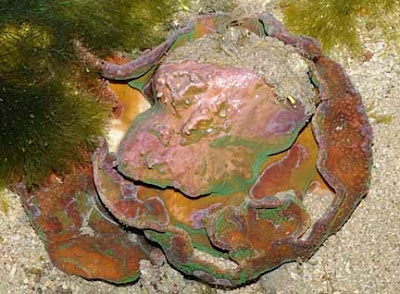 However, there were other corals that were not upside that were bleaching. Some had white portions on only parts of the colony.

Others were completely bleached.

When there is mass loss of zooxanthellae in a hard coral colony, the polyps are colourless and the underlying white skeleton shows through. Thus patches of the colony appear white or 'bleached'.

Without the food provided by the lost zooxanthellae, the polyps will be stressed and prone to diseases. Skeleton production and reproduction are also affected. Once the cause of bleaching is removed, however, polyps may eventually regain zooxanthellae (which live freely in the water) and thus recover their health. But prolonged bleaching can seriously damage large sections of a reef. Bleaching doesn't only happen to hard corals, but may also affect other cnidarians that have a similar relationship with zooxanthellae.

Hard corals can get rid of foul stuff to some extent. They do this by secreting mucus which sloughs off taking with it the offending stuff. But producing the mucus takes energy. And having to do it frequently can cause stress.

Our corals can be quite hardy. A wonderful reef exists on Pulau Hantu which lies a few hundred metres from the petrochemical installations on Pulau Bukom. Hopefully, our corals can withstand the oil spill and its aftermath.
Posted by Ria Tan at 6:03 PM