What is being done about the oil spill? (25 May)

Some news updates in the media about the oil spill this morning. 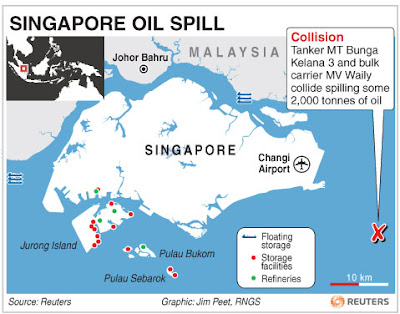 From Reuters 25 May 10;
Here's a summary of the latest news available on the oil spill.

Just how big is the oil spill?
MPA said a helicopter recce by the Republic of Singapore Air Force at 2.20pm found an oil slick measuring 4 kilometres by 1 kilometre, about six kilometres south of Changi East. By volume it is "enough to fill an Olympic-sized swimming pool", or "equivalent to three days of leakage from the Gulf of Mexico oil spill. 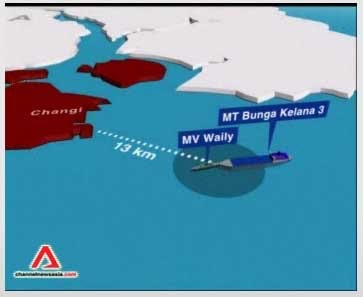 from Channel NewsAsia video clip 25 May; 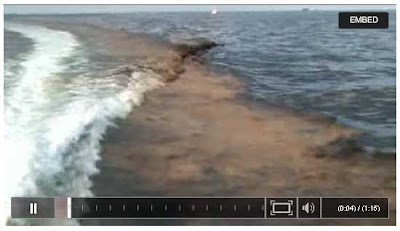 From a Reuters video clip 26 May 10;
What is being done about the oil spill?
The Maritime and Port Authority said five of its patrol craft, along with five from Malaysia and 10 from companies were at the spill. “The response craft are equipped with 41 tons of non-toxic and bio-degradable oil spill dispersants, 1,500 meters of containment booms and two skimmers with fast tanks,” said MPA. 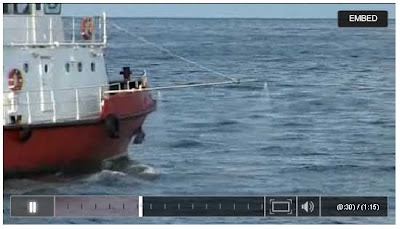 From a Reuters video clip 26 May 10;
The dispersants help to break the oil slick into smaller globules to facilitate biodegrading by micro-organisms. The containment booms are used to contain the oil slick and to facilitate collection by skimmers and fast tanks. Eighty-five people are deployed to the clean-up effort, with as further 200 on standby should it reach shore.

The company that owns the tanker says work is being done to “minimize the damage from the oil that’s leaked". A number of oil-retaining booms have been deployed. These were done by specialist companies retained by the company. 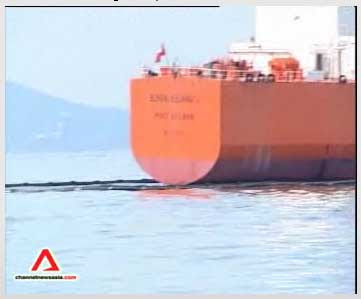 Oil boom around the damaged tanker, from Channel NewsAsia video clip 25 May;
"[The spill] seems to be a lot but if it is light crude, it will just evaporate," said Ho Yew Weng, response and projects manager of disaster management firm Oil Spill Response Singapore. Ho added that Singapore's hot climate would make the crude disperse even faster, and with the oil's prolonged exposure to the sun since morning, "a lot of evaporation would have taken place".

How did the accident happen?
The tanker has a double hull, a design meant to prevent oil leaks or flooding beyond the outer compartment. It was fully laden with 62,000 tonnes of crude when it was struck on its port side by a bulk carrier. The tanker was carrying "Bintulu Condensate, a grade of ultra-light crude oil". The collision created a 10-meter gash on the left side of the tanker. The cause of the accident has yet to be determined. 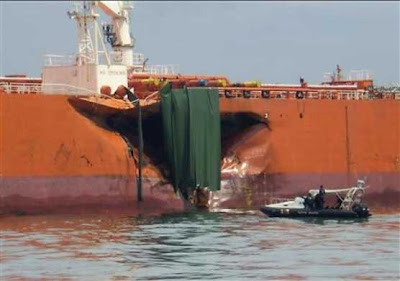 A close up view shows the damage on the Malaysian flagged MT Bunga Kelana 3 after a collision with a bulk carrier in the waters between Malaysia and Singapore May 25, 2010, from Reuters 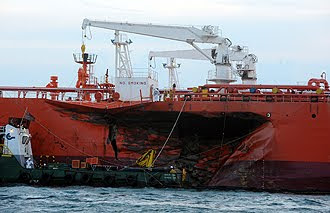 Photo from the Straits Times
A closer look at the damage and booms around the tanker from Straits Times RazorTV video clip, 25 May; 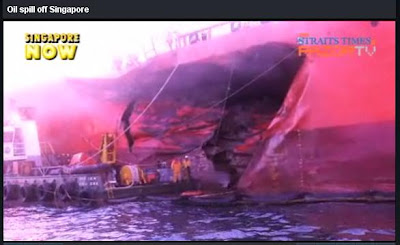 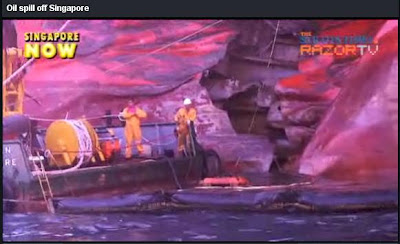 What is the likely impact on the environment?
An oil consultancy official said: "I think certainly the concerns are there. Even if it is contained, it will take some time to clean up."

Other salvage operators said the spill could potentially be damaging for the environment but the authorities' swift response would significantly lessen the impact.

The worst oil spill in Singapore took three weeks to clean up. This happened in 1997 when 29,000 tonnes of heavy marine fuel oil leaked from the tanker Evoikos when it was involved in a collision.

MPA has alerted marinas, sea sports centres, ferry terminals and other waterfront facilities to be prepared for possible impact arising from the oil spill.

What about the 'petrol' smell?
Channel NewsAsia reported that people in the areas near the waters affected by the spill smelled something was amiss. Many callers to the MediaCorp News Hotline said they smelled something resembling kerosene. Most of the callers said they were in areas near the sea such as East Coast and Joo Chiat. People in the business district near the port at Tanjong Pagar also said something was amiss with the air from 12pm-3pm.

In a joint statement, the Marine and Port Authority of Singapore (MPA) and the National Environment Agency (NEA) say some of the lighter portions of the oil could have evaporated and caused a smell that was detected by some members of the public in the Changi and East Coast areas.

According to Channel NewsAsia, the smell had subsided by late afternoon.

More discussions and shared observations of the smells on the Singapore Changi East Oil Spill (25 May 2010) facebook page.

Will fish farms be affected?
From Channel NewsAsia: The Agri-Food & Veterinary Authority of Singapore has given plastic sheets to some 35 fish farm owners to protect the area. Most of the fishes in the area are housed three metres below the water, so the owners feel that the oil spill will not cause as much damage as the plankton bloom that occurred last December. Fish farm owners say they will not be feeding the fishes when the oil spill reaches them to prevent the fishes from coming up to the surface to eat.

From Bernama: The Johor Department of Environment (DOE), in a statement Tuesday said, the spill is not expected to affect Malaysian waters or local beaches in Pengerang as south-westerly winds of 20-30km/hour and low tide from 3.25pm prevented this from happening.