Sunday at Operation No Release

Today, I joined the more than 250 volunteers for 'Operation No Release' to persuade people NOT to release animals into our nature reserves and parks. 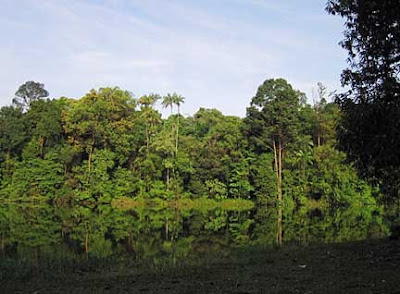 Not only do such releases harm the animals involved, but they also damage our beautiful forests and waterways.

The volunteers gathered at dawn, promising a bright clear day. 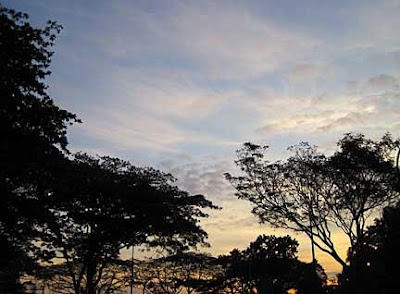 We gathered for a briefing by Roy of NParks. 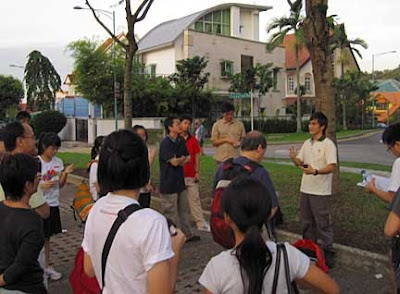 It is heartening to see so many people turning up to help. 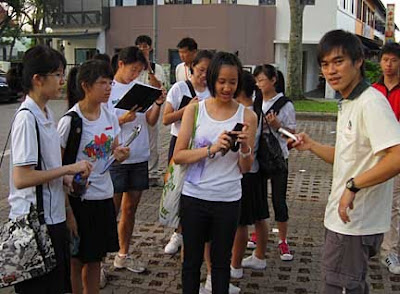 Everything is well prepared. With passes, a sheet of guidelines and brochures to give out. 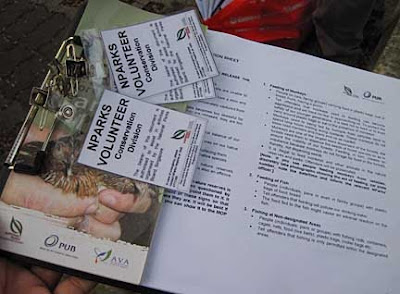 Some volunteers are catching up on breakfast. While it is illegal to feed the monkeys, it is perfectly fine to feed primates wearing clothes. 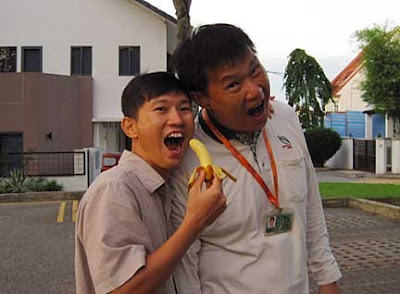 Then it's time to head out to our various stations. I meet up with November and Abby at Upper Seletar Reservoir. And the team located at this station already have an awesome picnic laid out! I couldn't resist their kind offer to taste some of their delicious food. 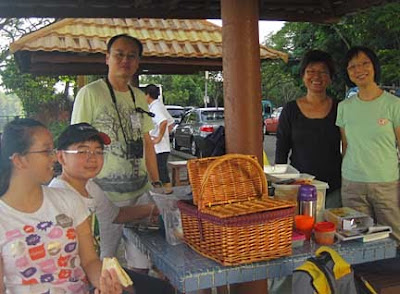 Soon, the three of us head out to our station. There are signboards put up at all the 'hot' release locations. So there is really no reason for anyone to plead ignorance of the issues. 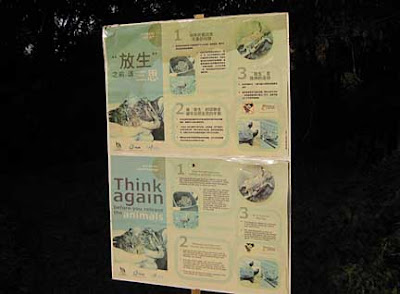 These signs clearly explain some of the negative consequences of animal release. In both Mandarin and English. 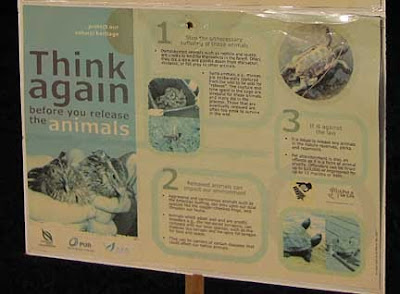 We get to our site, a lovely location at the reservoir surrounded by trees and singing birds. First, we practice our serious looks for dealing with any possible situations. 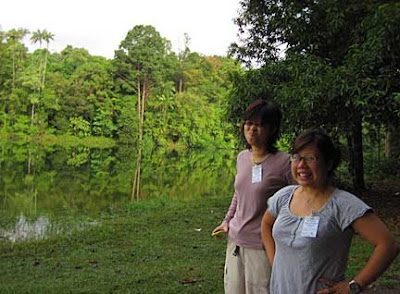 Then we set up our little picnic. Which isn't as awesome the other team's, but yummy nevertheless. 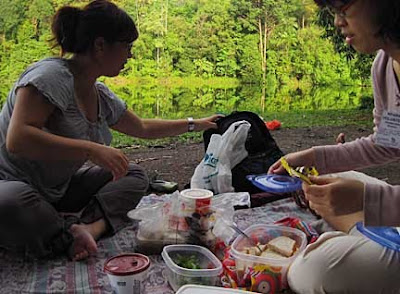 We spent the morning discussing upcoming programmes for the Leafmonkey Workshop which is run by November. And catching up with one another. We saw a Brahminy kite, some kind of little bird, a pretty butterfly, lots of ants trying to eat up our picnic, and heard gibbons calling from the zoo across the water.

But we didn't encounter any people. Except for the kind NParks officers who dropped by to make sure we were ok. Here they are as they were leaving us. 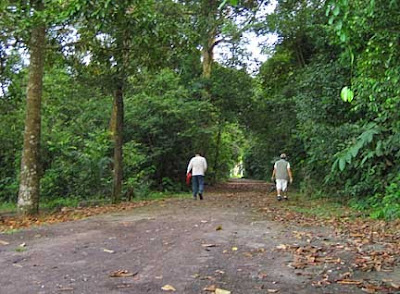 With so much to discuss, and in such pleasant surroundings, time flew by and in no time, it was the end of our shift! We met up again for a debrief, and most of the other teams only had minor encounters with people fishing where they ought not to.

It's heartening to see so many volunteers stepping forward to help raise awareness about the issues surrounding animal release and other human impacts to our forests. This year more than 250 people volunteered for Operation No Release, more than triple the number since the programme began in 2004.

In fact, the Buddhist Fellowship President Henry Baey says: “Compassion and wisdom are like two wings on the same bird. One without the other is not only futile, it can even be dangerous. Though the Buddha had unlimited compassion, he also had the wisdom to know when to intervene, where to help, and when to leave things alone. Similarly, we need to exercise our judgment in the course of practicing kindness. Releasing animals may seem like a beautiful, kind, meritorious thing to do. However if it upsets the eco system and causes harm, not only to the animals released, but to all living things in the area, can that be called a genuine act of compassion?

While the Buddhist Fellowship’s Spiritual Patron, Ajahn Brahm say: “Before one releases a captive animal one must use one's wisdom and reflect whether one is doing more harm than good. If more harm is being done, such as sending that animal to a certain death, or destroying the local habitat, then releasing the animal is clearly bad karma. It should not be done. Compassion without wisdom can cause more harm than good.”

Why should we not release animals?
from the NParks media release on Operation No Release (pdf)

While the intention behind such acts may be kind, it actually causes more harm than good. Most of the animals do not survive after they are released, as they are usually not native to Singapore and are unable to adapt to the habitat, or are domesticated and unable to fend for themselves in the forest. It is estimated that about 90% of released animals die within a day.

The act of releasing animals also creates the demand for more animals to be captured from the wild, and sold in shops. The time spent in captivity would be stressful for these animals. Some of the common animals released include birds, crickets, rabbits, hamsters, and terrapins.

The introduction of non-native animals into the nature reserves and reservoirs also affects the ecological balance. Some of the introduced animals that do survive are usually more aggressive or prolific breeders (such as the red-eared terrapins) and may compete with the native animals for space and food, or prey on the native animals.

More about the issues at Help stop cruel 'Animal Liberation'.