A never-before-attempted approach to coastal protection and restoration is being tried out by NParks to save possibly the last largest pristine stretch of mangroves in Singapore. 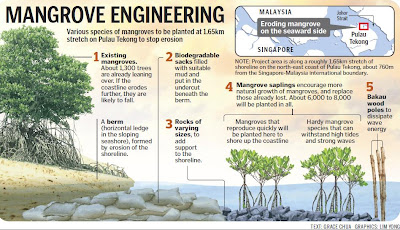 From the Straits Times. Click on image for larger view.
More than 1,000 mangrove trees on Pulau Tekong's north-eastern coastline are at risk from serious erosion due to boat traffic.

The erosion has affected 3km of north-eastern shore, posing a threat to the 92 hectares of mangroves in Pulau Tekong which is one of the largest remaining mangrove areas in Singapore with a mature and undisturbed habitat.

From a study it commissioned in 2006, NParks found that 1.65km of the north-eastern shore is most severely affected. The study found that a number of trees had already fallen and another 1,300 were in danger of toppling. At some points, the extent of the erosion was as deep as 1.2 metres below the level of the mangrove berm.

Severe erosion undercutting mangroves at the Main Bridge, Sungei Buloh, Mar 2010. The erosion at Pulau Tekong is similar in nature but more severe in many places.

Otherwise seemingly healthy large mangrove tree toppled over at the Mangrove Boardwalk, Sungei Buloh, Feb 2010. This is the fate of the Tekong mangroves if we don't stop the erosion.

NParks' works will concentrate on restoring the most severely eroded 1.65km stretch. In February last year work, was started on modelling the area's wave movements and investigating the soil.

The first stage in the restoration process will be to fill the eroded parts below the mangrove berm with mud-filled biodegradable sacks. The mud will be taken in a sustainable manner from other locations. Next, loosely-placed stones will be placed in front of the berm as a shoreline stablisation measure.

Around 8,000 mangrove saplings will be planted in front of the stones to help deflect the waves. At the vanguard will be the tough and sturdy Bakau pasir (Rhizophora stylosa) saplings which have been carefully nurtured from propagules collected from native trees growing on Singapore shores. To protect the saplings from being washed away before they grow taller, two rows of 'fences' made out of bakau poles will be set up in front of the saplings. The bakau will be taken from sustainable sources.

The process was developed with consultants Surbana, and hopes to not only stop repeat erosion but also replace lost mangroves with native plants. Once the saplings are well grown, their tangle of stilt roots will not only form a living fence to stop further erosion, but also 'trap' new saplings floating in from other sources nearby. As these sapling settle down and grow up, we can thus hope to restore and improve the biodiversity of the mangroves at Tekong.

A full grown Bakau pasir with looping stilt roots helps to bind sediments and forms a living 'fence' against waves from boat traffic. This is a tree growing on Pulau Semakau with Chua Jit Chern who is currently looking after the saplings that will be planted at Tekong!

In their assessment, environmental consultants DHI assured that the project would not cause the coastline to creep outwards towards international boundaries, and there would be no cross-border physical or ecological impact. The site is just 760m from the Singapore-Malaysia boundary.

A tender will be called in June for the work and NParks expects the project to be completed by June next year. The public can view the project's environmental impact assessment report till next month - by appointment with NParks.

If this attempt at Pulau Tekong succeeds, the same methods could be applied in other threatened coastal areas in Singapore. Such as the severe erosion at Sungei Buloh Wetland Reserve. And also at East Coast Park.

Even though the Tekong mangrove area is off-limits to the public, it remains an important part of Singapore's natural heritage and a source of genetic diversity. It is home to rare birds and rare mangrove species such as Tumu berau (Bruguiera sexangula). Dr John Yong rediscovered this rare tree on Pulau Tekong. He is also and advisor on this project.

Where is the mangrove project? 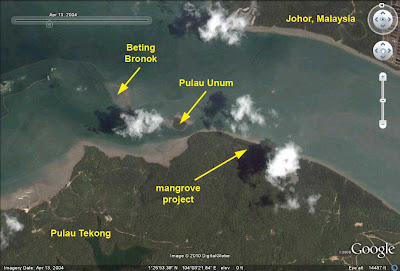 Here is a closer look at the site. 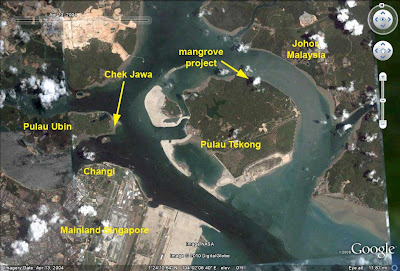 This is the view provided by Google Earth for 13 Apr 2004. Later images are not as clear or are obscured by clouds.

I wish the Tekong project every success and hope it can pave the way for natural restoration and re-wilding of Singapore's mangroves!

Construction Works and Shore Restoration at Pulau Tekong
from Port Marine Notice No. NO. 120 of 2010 dated 24 Sep 2010

With effect from 04 Oct 10 to 03 Jan 11. 24 hours daily including Sundays and Public Holidays. At Pulau Tekong within the working area bounded by the following coordinates (see attached chartlet):

Construction works will entail installation of bakau piles, filling of existing berm with biodegradable sacks and shoreline stabilization using stones. Piling and construction works will be carried out by work barges “Oceanlink 122” and “Oung 3”. The safety boat will be in attendance throughout the duration of the construction works to warn other craft of the works in the vicinity. Further general enquiries relating to the project can be directed to Mr Jerry Teo, project manager at Tel: 9800 1149 or email:jerry.teo@koon.com.sg.