Balloon releases are bad as balloons can be eaten by marine life which choke and kill them. And balloons add to the enormous problem of marine debris. But what about 'sky lanterns'? 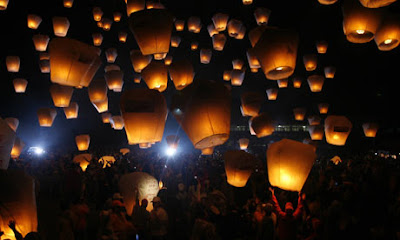 A sky lantern is made up of paper and wire or bamboo frames. An earlier report found that the paper biodegrades within "six to eight weeks", and the wire take nine months to break down.

A recent article highlights some dangers of sky lantents including the wires being a hazard to livestock - "like eating razorblades", the lanterns being mistaken for distress flares and being a fire hazard near trees. Vietnam, Malaysia and Thailand have already banned their use.

Alas, it seems they are being released in Singapore more frequently too: Floating lanterns: Fire hazard Straits Times Forum 17 Feb 10;

Sky lanterns: beautiful, but dangerous
The paper lanterns are a hazard to livestock and can be mistaken for distress flares
Leo Hickman, The Guardian 2 Feb 10;

It was fun while it lasted, but it seems the trend for sky ­lanterns might be heading for a forced landing. The ­National Farmers' Union has joined the Maritime and Coastguard Agency in expressing deep reservations about the continued sale of paper lanterns containing tea-light candles. In recent years, the lanterns have become popular at outdoor events, such as wedding receptions and music festivals, with revellers lighting hundreds and watching them float off into the night sky to a chorus of "oohs" and "aahs".

But what goes up must come down, and farmers in ­particular have become increasingly ­concerned that livestock might swallow a lantern's wire or ­bamboo frame, or, even worse, that fires might break out in hay barns.

"If swallowed, the wire could puncture the stomach lining, and in some cases this could prove fatal," says Mike Thomas, a NFU spokesman. "There's also a good chance that the wire could get wrapped around an animal's foot and become embedded in the skin, which would be terribly painful."

Elsewhere, coastguards say lanterns, which can travel for several kilometres and to an ­altitude of 1,000m before the candle burns out, are routinely mistaken for distress flares. A handful of east Asian countries, such as ­Vietnam, Malaysia and Thailand, have already introduced bans, particularly in the lead up to ­major festivals.

An Essex-based company called Sky Lanterns, which claims to be the "world's ­leading supplier", says it would like to see wire-framed lanterns banned and is now developing a new wire-free lantern that will be "coming in the next month or so". It recommends that ­revellers let the local coastguard know in advance if they are planning to light any ­lanterns, never release them near dry crops, nor within five miles of an airport, nor in winds above 5mph. They should also ensure "trees are not in the flight path".

Concerns about these ­lanterns don't seem to have drifted ­towards Indonesia, though. In December, the sky lantern world record was broken when 10,318 lanterns were lit simultaneously at the annual Freedom Faithnet Global event in Jakarta. The event was billed as having "an ­environmental focus".

What's the environmental impact of a sky lantern?
They may be beautiful as they drift off into the night, but the party could soon be over for sky lanterns
Leo Hickman, guardian.co.uk 13 Jul 09;

I am getting married next year and when going to buy so-called 100% biodegradable "sky lanterns" I have been disgusted to find that they contain metal wires which obviously take years to degrade. Beautiful and fairly cheap they may be, but I for one will not allow even the possibility of harming animals to come from my wedding, and I strongly believe that others will feel the same – if they have the knowledge.

Less of a question, more of a statement, but I take your point, Saffron. I, too, have wondered about what happens to these sky lanterns once their brief blaze of glory begins to fade and they fall back to the ground. They are, indeed, a fairly splendid sight as they drift away into the night sky. But, as with the release of helium-filled balloons at a charity event, they must fall back to earth somewhere resulting in – at the very least – an eyesore for someone to clean up.

The claim made by some of the sky lantern retailers about their products being "biodegradable" is certainly worth exploring. If these paper lanterns did, indeed, rot away within a matter of days, then they might possibly claim to be environmentally benign. But, as you point out, they contain a thin metal wire support.

I rang one of the UK's leading online sky lantern retailers and asked its sales representative to put some flesh on this "biodegradable" claim. He said that the paper biodegrades within "six to eight weeks", and claimed that the "flourished wire" take nine months, on average, to break down.

How did he know this? "The manufacturers did some tests. But the wire is only eight inches long and accounts for just 1% of the lantern's mass."

Who are the manufacturers? "I don't know. They used to be in Thailand, but I think we get them from Japan now."

This answer intrigued me, because on the company's website it says that all its products are "sourced ethically" and that it "operates a fair trade agreement with our manufacturers". This led me to assume that it must have a very close relationship with its suppliers, so why the confusion about where the sky lanterns are sourced? I asked what this "fair trade" claim meant.

"Some of our competitors pay under the minimum wage in these countries. We ensure that we pay a fair wage." But such statements are next to meaningless without any form of proof or certification.

I came away from the conversation with far more concerns and questions than I entered it. For example, why should the claim that the wire takes nine months to break down be presented as a means of reassurance? Wire lying on the ground for nine months is surely a considerable hazard, depending on where it lands, for farm animals or children. And can metal wire really break down so quickly? I'm always digging up old bits of wire fencing in my garden (formerly a field) which must have been there for years, if not decades.

Back in April, a farmer who runs a wedding venue in the Staffordshire Moorlands banned the use of sky lanterns on his land due to similar concerns (thanks to the Guardian user Yamaman for a link that led me to the story). Mick Heath of Heaton House farm told the North Staffordshire and South Cheshire Sentinel: "Brides and grooms ask if they can let them off, but they do not understand that the wire in them takes ages to break down. He added:

If it gets wrapped up in hay bales it would be like swallowing razor blades for farm animals and if it falls into grassland it will kill wildlife. These lanterns are advertised very heavily in bridal magazines. Brides and grooms can see the attraction, but not the danger … One of our cows bled to death internally after eating shards of a discarded drink can. I want to do all I can to avoid any animal suffering like that again.

Margaret Heath, Mr Heath's wife, expressed an additional concern: "There is also the danger that if they come down alight they could start a fire on the moorlands, a fire in a tinder-dry cornfield or even someone's house. We really do not know where they are going to come down."

Sky lanterns have long been a tradition in east Asia. You only have to look at this footage of a sky lantern festival in Chiang Mai in Thailand to see how popular they are – and how potentially dangerous they can be when lit en mass.

But the party could be coming to an end. Last week, the Vietnamese prime minister, Nguyen Tan Dung, announced that a sky lantern ban would take effect from mid-September, says a report by VOV News:

According to the Ministry of Agriculture and Rural Development, almost 20 forest fires have been caused by burning sky lanterns since the beginning of the year. In Hanoi alone, there have been eight fires in workshops, electrical stations and houses caused by sky lanterns. Sky lanterns that fell on power stations in the capital were also blamed for causing power blackouts, during Lunar New Year's Eve earlier this year.

In Thailand, too, some local authorities are now starting to ban the sale of sky lanterns ahead of major festivals.

And closer to home, three German states have now banned the sale of the lanterns following the death of a 10-year-old boy in a house fire caused by a sky lantern in North Rhine-Westphalia. Even the UK coastguard is now starting to express concern about the site of these lanterns drifting out to see and mimicking the sight of distress flares.

I doubt it will be too long before a ban is considered here in the UK.