Pulau Semakau: glimpses of the past in NewspaperSG

I did a quick search for 'Semakau' on the National Library's newly launched NewspaperSG service. And found a whole bunch of interesting articles online!

There was this charming article in Oct 1983 which describes life for the residents of Pulau Sakeng as: "A little bit country, a little bit rocky and old - that's laid-back Pulau Seking where the beat goes on". OK, very 1980's ONJ title...

Really old articles give a glimpse of life for the people on Pulau Semakau, nearby Pulau Saking and other islands.

In Aug 1952, it was discovered that Pulau Semakau was not listed on the government books even though 350 people lived there!

A Community Centre was opened in Sep 1963 on Pulau Semakau, and a $10,000 postal agency opened in Apr 1958 to "provide postal services to all 1,000 islanders off Singapore". But postal services were cut off in Jul 1975 due to high operational costs.

In Jun 1974 Pulau Semakau hosted a sports meet among four islands there which was complimented by the Social Affairs Minister as a good way to promote good neighbourliness through sports.

In Jul 1950, a wooden attap school building was completed for 30 Malay students but a teacher has yet to be found. At that time the population of Pulau Semakau was described as "mainly Malay fishermen and a few Chinese traders". In Nov 1967, cash gifts were made for a mosque on Pulau Sudong and two religious schools on Pulau Kechil and Pulau Semakau.

Pulau Semakau seemed to be a getaway destination for mainlanders in the past. In Oct 1978, there was an article highlighting our "Unspoilt islands for walks in the wild.. where you can find pitcher plants, pygmy frogs and fire-flies that dot the night". In Dec 1971, polytechnic students had a four-day camp at Pulau Semakau to help "clean up and beautify the island"

Begining of the end?

Even before Semakau was directly affected by development, islanders affected by other developments moved there. In Feb 1970, 360 families or 2,000 people in Pulau Bukom were resettled to make way for the petrochemical plant there. While two-thirds moved to the mainland, one-third were resettled on Pulau Semakau and Pulau Saking.

In Jul 1975, it was reported that Jurong Town Corporation would develop Pulau Semakau into a petro-chemical complex built on 220 ha reclaimed from "swamp, foreshore and seabed around the island". The reclamation was to start in Jan 1976 and fill obtained by "dredging the surrounding areas".

In Apr 1976, Jurong Town Corporation announced plans to turn Pulau Semakau into a big marine base for shipbuilding and other marine industries, to be developed on 102 ha of reclaimed land. It had already called for tenders for the work.

Conservation work in the area

In Sep 1988, a survey by "Singapore underwater enthusiasts" found "more than 150 species of coral and other interesting marine life on five reefs" including Cyrene, Pulau Hantu and its patch reefs, Pulau Semakau and Raffles Lighthouse. This was part of the Singapore Reef Survey and Conservation Project launched by the Republic of Singapore Yacht Club, Singapore Institute of Biology and Singapore Underwater Federation.

Dumping began on Semakau before the bunds were built

It appears dumping of earth was taking place at the site even before the bund was built, according to a report in Feb 1989. Another Feb 1989 report said every day 500 truckloads of 'unsuitable' soil was dumped at Pulau Semakau expecting this to peak to 1,000 truckloads a day. The soil came from excavations for the CTE project.

Early reports of and reactions to the landfill at Semakau

There was a letter to the press in Mar 1989 expressing disappointment about plans to turn Pulau Semakau into a dumping ground. And concerns about it being located "adjacent to the popular Pulau Hantu recreational area."

In Nov 1989, Prof Chia Lin Sien of the National University of Singapore's Geography Department called for a 'back to nature' zone comprising an unspoilt 10-km belt of Southern Islands where the water is crystal-clear and marine life like reefs, seagrass and fish can thrive undisturbed. Prof Chia's suggestion was to develop a marine reserve or park around the islands of Semakau, Sudong, Pawai and Senang. Prof Chia also made a plea that plans for garbage disposal at Sudong, Semakau and Sakeng be shifted elsewhere.

Original plans for the landfill 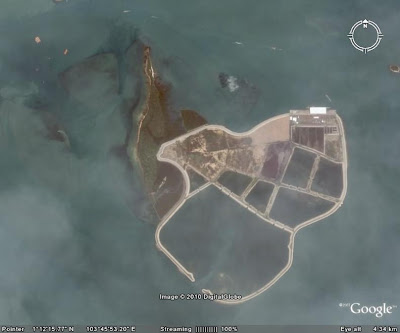 There were lots of other interesting articles which are not available online. But certainly this is a valuable resource for anyone wanting to learn more about our natural and social history. These quotes reported at the launch indicate this is one of the intentions of making this resource available.

'It is a historic moment... newspaper content is a treasured heritage resource because of the comprehensiveness of its coverage in a nation's social history,' said NLB chief executive N. Varaprasad.

Parliamentary Secretary of the Ministry of Trade and Industry Sam Tan 'These projects will help us to build the Singapore identity and foster stronger bonds in society.'

NewspaperSG: an online resource of current and historic Singapore and Malaya newspapers, with a searchable digital archive of newspapers published 1831-2006 or find information on over 200 newspaper titles in the National Library's microflim collection.