Any dead fish at Changi?

I made a swift solo check this evening on a not-so-low tide. Having seen hundreds of dead fishes at Pasir Ris, and reading about fish farms at Pulau Ubin suffering fish kills as well, I was a little worried about the health of the Changi shores. I started at Changi Creek where the retreating tide in the dying day has exposed lots of soft mud. There was a strong smell of dead fish at some spots.

But I couldn't find the source of the stink. There were two large fishes well spaced apart on the shore. They looked like they died quite some time ago. As I moved further away from the mouth of the Creek, the fishes were progressively more decomposed and or just bones. In total, having checked both the shores near Changi Point and rushing off to shores further east, I found less than 10 dead fishes or remains of large dead fishes. With only 1 large decaying fish on the eastern shore. There were no small dead fishes.

The dead fishes all look like the kind commonly caught by fishermen. Perhaps these were left behind by fishermen and not killed by 'bad water'? Indeed, there was one person castnetting in the Creek. As well as on the Changi shore facing Pulau Ubin (on the horizon). How are the Changi shores doing?
I did a very VERY hasty and superficial look around as I tried to cover as much ground as possible in the short one-and-a-half-hour low tide.

From this quick trip, the shores at Changi generally look alright to me.

The small areas of rocky shores were still covered with living sponges (the purple and orange patches) and hard corals (the dark patches). 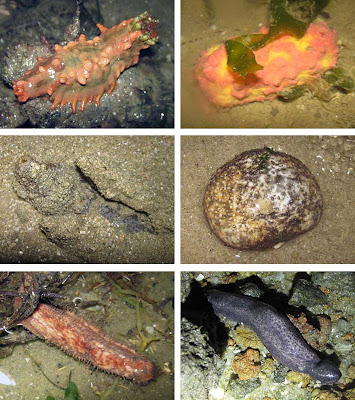 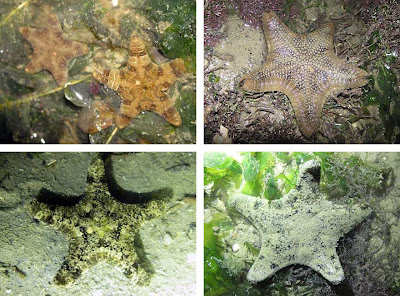 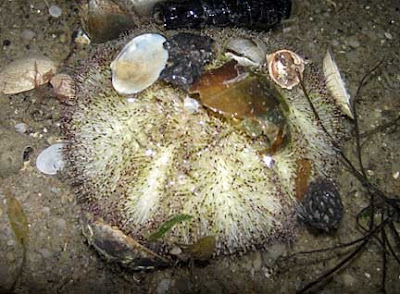 The peacock anemones (Order Ceriantharia) were seen in the usual abundance, and looking very happy.

Changi is one of the few places where we can see the 'Tiger anemone' (photo on right) and there were many of these today. As well as some Peachia anemones (Peachia sp.). I couldn't find any Haddon's carpet anemones (Stichodactyla haddoni) but the tide wasn't very low today.

I also saw one Flowery sea pen (Family Veretillidae), and even a Ball flowery soft coral (Family Nephtheidae). As well as some Sea pencils (no photo).

On the seagrass meadows, many large living Window pane clams (Placuna sp.) were still seen. And on the sand bar, I saw this live Venus clam (Family Veneridae) popped out above the surface.

I even saw a special snail! This is a strange moon snail. It's probably the Egg-white moon snail (Neverita albumen) that I've seen before on Changi. 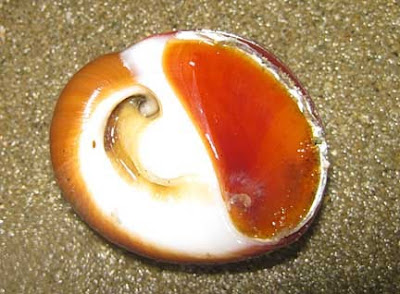 It is rather flat and wide.

Washed ashore on a sandy stretch was a live nerite, and an empty shell of a Fig snail (Family Ficidae)! I wasn't as lucky as Liana who saw a live Fig snail at the East Coast! Putting the shells on the sand to photograph, I noticed a live Sand star (Astropecten sp.) half buried there. There were lots of little crabs out and about in the seagrasses, and also many Horn-eyed ghost crabs (Ocypode ceratophthalmus) on the shore. I also saw but didn't photograph a Spearer mantis shrimp (Harpiosquilla sp.). 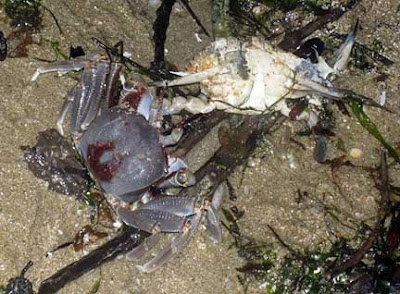 I didn't really have time to squint for small fishes, but I did look out for seahorses. I didn't see any living or dead ones. I also didn't see any large living fishes either.

The seagrass meadows are doing well, looking like they normally do in my previous visits. With lush growths of Fern seagrass (Halophila spinulosa) which is only common on our northern shores. 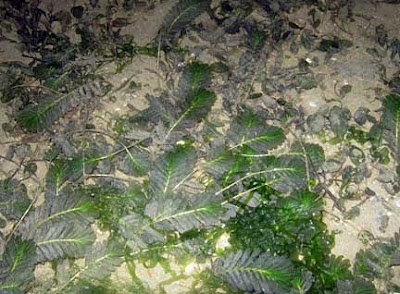 And good patches of Needle seagrass (Halodule sp.) and lots and lots of Spoon seagrass (Halophila ovalis) which have very large leaves on the Changi shores.

There were some parts with much crunchy pom-pom shaped red seaweed (as is normally seen). 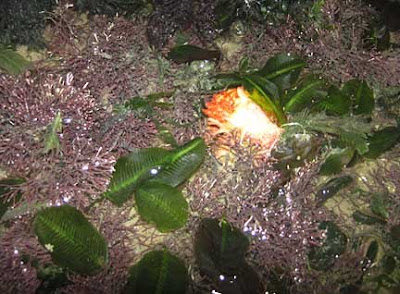 And some parts had lots of large seaweeds, these are Narrow feathery seaweeds (Caulerpa taxifolia). On the eastern shore, there were huge piles of seaweed washed up on long stretches of the shore. A closer look and the piles are made up of a variety of seaweeds. Mostly Sea lettuce (Ulva sp.) and Mexican seaweed (Caulerpa mexicana), mixed with blades of dead Spoon seagrasses. These two green seaweeds do 'bloom' seasonally. In fact, the seaweeds were also blooming in the Southern shores, so much so that we had difficulty reaching the reef edge during our recent trips there. There wasn't much mangrove seedlings among the drift. Unlike during our visit to Changi after the mass deaths at Chek Jawa in 2007. From this very brief and hurried trip, the marinelife on the intertidal shores of Changi so far seems normal, i.e., similar to what we usually see in the past.

I should try to make some checks on the shore during the neap tide. At neap tide, there isn't such a huge difference between high and low tides, and thus less water flow. It is expected that this might worsen the water quality and thus raise the risk of more fish deaths.

We can only hope for the best.

PS. Photos wonky today as Big Cam had a rest at home while I gave new Sneaky Cam a good workout.
Posted by Ria Tan at 11:14 PM