Does a captive whale shark bring bad luck to a city?

"Has anyone noticed the correlation between Dubai’s troubles and the capture of the whale shark by Atlantis?" asks a reader in a letter to a UAE daily. 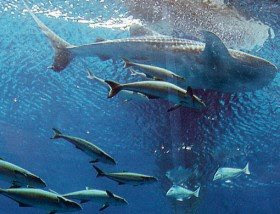 Sammy in his tank at Atlantis, Francois Nel/Gulf News

Has anyone noticed the correlation between Dubai’s troubles and the capture of the whale shark by Atlantis?

Fourteen months ago the city was booming, everyone was talking about how great the city was and the international press was lavish with its praise... And the whale shark swam free...

It was then captured and imprisoned to attract curious visitors... and then look what happens as the world turns on Dubai and it cannot repay its debts.

They say what goes around comes around.

So do the right thing Atlantis and release the whale shark as you promised all those months ago and you may then see the tourists and cash flow freely back into Dubai and the city may then enjoy some more good fortune - it’s called karma...try it you have nothing to lose.

PS Does Abu Dhabi have a kept whale shark on display... no...

I rest my case.

Related posts on the captive whale shark at Atlantis, Dubai