Singapore fish farms to contribute 15% of our fish supply in the next five years, up from the current 4%. This is the plan by the Agri-Food and Veterinary Authority (AVA), as part of efforts to diversify and stabilise Singapore's food supply.

How many fish farms do we have?
According to media reports, Singapore has 105 fish farms. 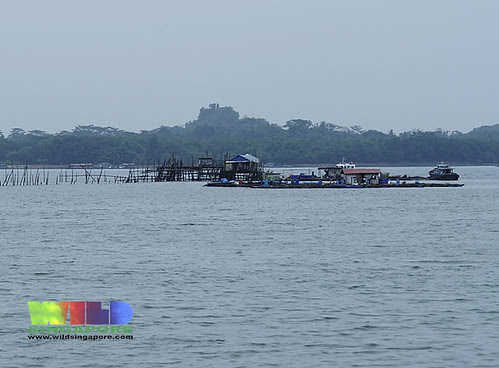 Where are these fish farms located?
I've seen many off Pulau Ubin (where Chek Jawa is located) and Pasir Ris, some off Lazarus Island and off Pulau Semakau.

What do they farm?
They raise fish like sea bass and mullet from fry bought from places like Taiwan and Indonesia. The AVA is also stepping up efforts to breed fish through genetic selection, identifying faster-growing breeds and supplying their fry to local fish farms, in a bid to raise productivity.

How is the AVA plan going?
Five Singapore fish farms have formed a cooperative and now sell their output directly to NTUC FairPrice, which buys an average of 500kg of fish from them daily. Six varieties of such fish will be introduced: Grey mullet, milk fish, seabass, red snapper, black king fish (cobia) and green mussel. 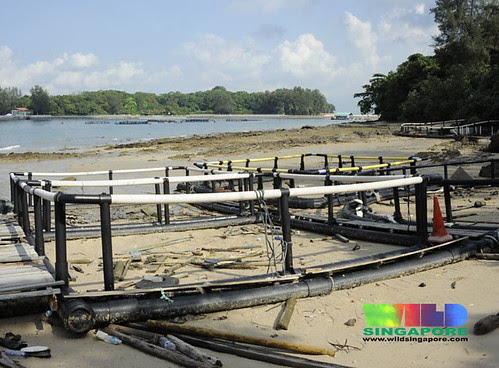 Fish farm equipment 'parked' on the natural shores of Lazarus Island in Jul 09.

Has AVA considered some of the ecological and environmental impacts of boosting fish farming? These are not addressed in the media reports.

What are some of the impacts of fish farming?

Fish diseases can impact not only stock but also marine wildlife. Farms may use antibiotics and other chemicals on their fish stock. These together with wastes from the fish stock are also released to the surrounding marine ecosystems. Excess nutrients and wastes can cause ecological upsets such as algal blooms. Escaped farmed species may become invasive and disrupt our native marinelife. Farmed fish need to eat something and increased demand for their food stock may not be sustainable. The farmed fish have to come from somewhere: wild-caught stock or farm-bred stock?

Here's more on the global issues related to aquaculture from State of the World’s Fisheries and Aquaculture 2008 (SOFIA 2008), by the UN Food and Agriculture Organization (FAO)

Food supplies from aquaculture now equal those from ocean and freshwater capture fisheries.

"The dramatic growth in aquaculture makes it more and more urgent to ensure that aquaculture becomes more sustainable and that supplying the stock and the feed for fish farming becomes less of a burden on traditional fisheries,” said Miguel Jorge, Director of WWF’s Global Marine Programme.

“Coastal aquaculture must also stop making inroads into fish habitat such as mangrove areas, it must becomes less polluting and less of a disease risk and it must be carried out without making communities more vulnerable to natural disasters."

Many farmed fish eat fishmeal and oil, made from small species like sardines. The FAO says the tonnage of these species consumed has trebled since 1992, but does not say whether this is a consequence of fish farming, or because the fish are being used for other purposes.

In a parallel report, international fisheries pressure group Oceana charges that by relying on wild-caught species like sardines, which now constitute one third of world fisheries, fish farms are starving larger predators, including tuna, marine mammals and seabirds.