The reefs of Beting Bemban Besar are very much alive! 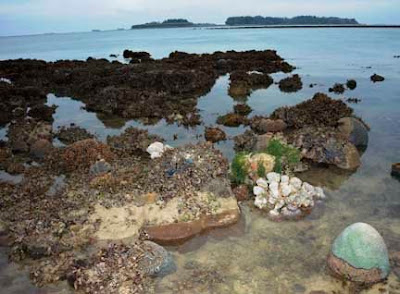 We explored this submerged reef off Pulau Semakau for the first time this morning. On the horizon are the live-firing islands of Pulau Senang and Pulau Pawai.

Beting Bemban Besar is located next to Terumbu Raya, which we have visited in Feb 09 and Mar 09. So it's not surprising to find that they are somewhat similar. 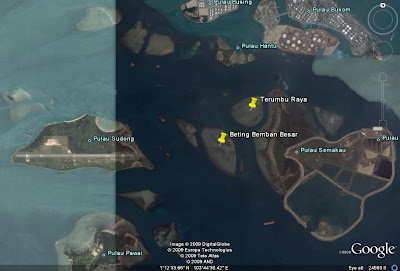 The Southern reef edge is particularly rich with many coral colonies packed near one another. 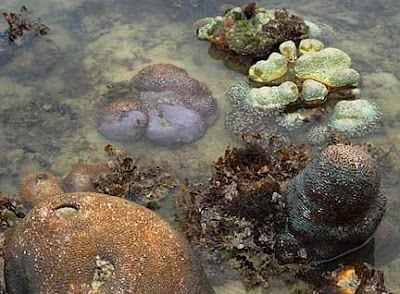 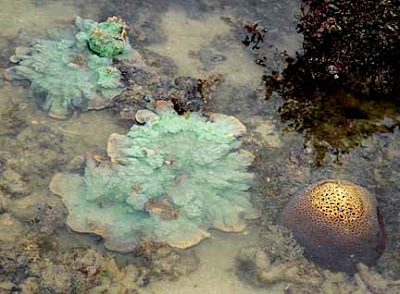 There were quite a number of large Pachyseris sp., which have plate-like colonies with corallites that form rings on the surface. They came in various colours. This large one was a shade of dusky pink.

And another was greenish.

While this smaller one was tinged baby blue.

It's always a delight to encounter Merulina sp., a plate coral with corallites that radiate from the centre to the edge.

Another special hard coral is the Brain anchor coral (Euphyllia ancora). The colony has meandering corallites that resemble the folds of a brain, and the long tentacles of the living polyps have a U-shaped tip.

There were several large colonies of these Trumpet corals (Caulastrea sp.). The corallites are long and tubular, quite trumpet-like. But this is not obvious from the surface of the colony. However, in this colony, you can see a bit of the corallite shape.

Like at Terumbu Raya, there were these large Lettuce corals (Pavona sp.).

There were also many Carnation corals (Pectinia sp.) in shades of blue, green and orange.

And often mistaken for more commonly seen boulder corals is this pretty Pebble coral (Astreopora sp.) with has bumpy corallites.

There were many large mushroom corals (Family Fungiidae) of all kinds. Including the Mole mushroom coral (Polyphyllia talpina) with short stubby tentacles and star-shaped coral walls.

As well as Tongue mushroom corals (Herpolitha sp.) with slender tentacles and coral walls in short overlapping lines running from the centre to the edge.

And there were lots of circular mushroom corals in various colours and textures. Including some that look like they were smooth mushroom corals. In the short stretch of reef I explored, I saw a lot more mushroom corals than on Pulau Semakau. 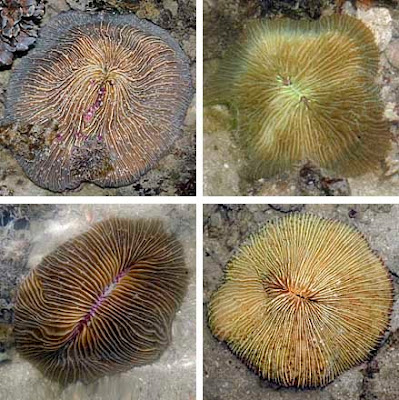 Galaxy corals (Galaxea sp.) were also seen, in bright colours. This is one that is submerged with its tentacles expanded.

Galaxy coral has star-shaped corallites, which is more easily seen when the tentacles are retracted.

Of course there were lots of the kinds of hard corals commonly seen on our other shores. Such as the Goniopora corals (Goniopora sp.). 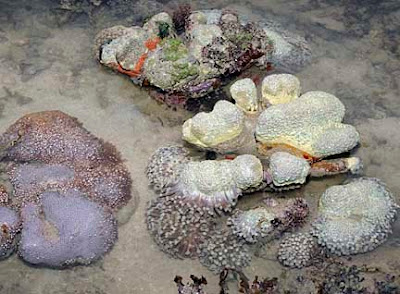 The Anemone coral (Goniopora sp.) has large long polyps that obscure the hard skeleton so that the colony is sometimes mistaken for a sea anemone.

Another kind has smaller polyps. These formed really large colonies on this shore!

The Flowery disk coral (Turbinaria sp.) is seen on many of our shores, and many large well formed colonies were seen on this shore.

Cauliflower corals (Pocillopora sp.) were also common here as on our other shores.

There were also lots of Brain corals (Family Mussidae) of all colours and textures. 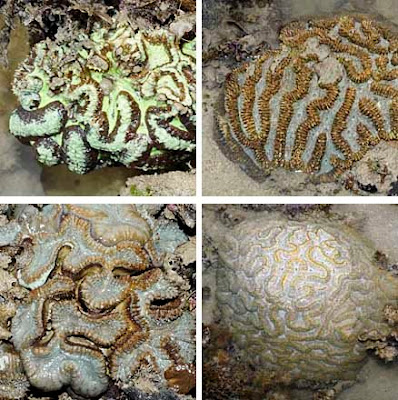 And of course, lots and lots of Favid corals (Family Faviidae) in bright colours and all kinds of patterns. 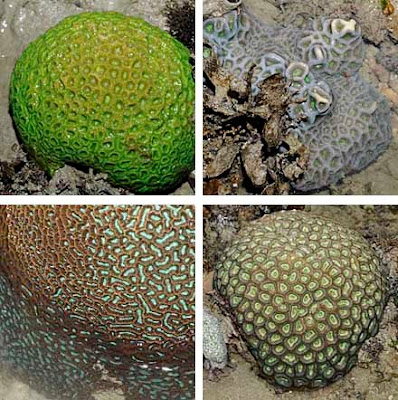 There certainly is an amazing variety of hard corals seen on the shore, even on our short trip and in the small area we managed to cover.

As well as lots of other interesting sightings.

We should come back again to explore this reef more carefully!