Claims that a barrier of mangrove trees can halt a tsunami are false and dangerous. The only way to prevent deaths during a tsunami is to move people out of the way. 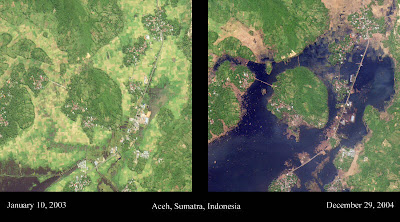 Photos from Directions Magazine.
There are many reasons for preserving the world’s dwindling stocks of mangroves, but protecting people from tsunamis is not one of them.

A team of international marine scientists announce their findings, on the anniversary of the 2004 tsunami.

"The tsunami that hit Aceh [in Indonesia] was estimated to be about 12 kilometres thick and so the Ocean just pushed in for about an hour. When you've got that much water, nothing's going to stop it, apart from once it hits the side of a mountain and it's got nowhere else to go."

“Following the Boxing Day Tsunami scientific studies were released which claimed that the damage to coastal communities had been less in places where there was a barrier of trees or coastal vegetation,”

“However these studies looked only at the presence or absence of vegetation and the extent of damage – and did not take account of other important variables, like the distance of a village from the shore, the height of the village above sea level or the shape of the seabed in concentrating the tsunami’s power.”

“In my own visits to the tsunami-ravaged areas, I saw places where quite heavy vegetation had provided absolutely no protection at all against the force of the ocean, and this led us to investigate the assumption more deeply. It turns out it was not well founded.”

This recent study shows that there is, as yet, no evidence that coastal tree belts can provide meaningful protection against a tsunami or, for that matter storm surges produced by cyclones, such as the surge that followed Cyclone Nargis in Myanmar early this year which killed over 150,000 people.