How I was smitten by dinosaurs!

Yesterday, I heard many reasons why we should have dinosaurs at our New Natural History Museum during Prof Peter Ng's talk. 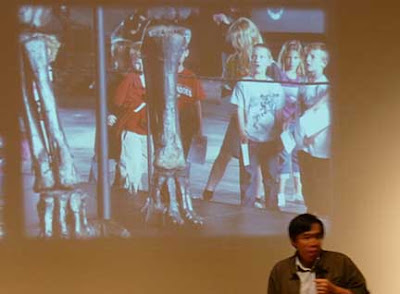 But it was more than the talk that finally convinced me that we should have dinosaurs.

Interspersed among the many fascinating stories about the history of natural history in Singapore, Prof Peter shared about why dinosaurs are a necessary part of our New Natural History Museum. Among them, the Raffles Museum of Biodiversity Research's direct experience with the 'magical effect' of dinosaurs when NUS, together with the Science Center of Singapore, hosted a dinosaur exhibition in 2006. It was hugely popular, and was the only event that actually made money. Read more about this 2006 exhibition in Siva's post. 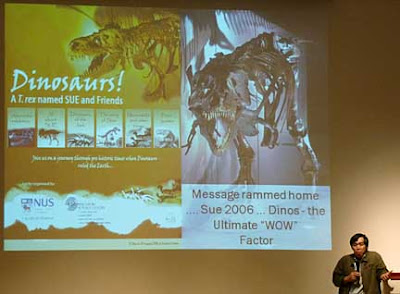 Dinosaurs are so automatically associated with museums that many of the tender applications for the construction of the New Natural History Museum had dinos in their drawings! Including the winning tender. So the new building will certainly be able to house a dino. Prof's initial reaction to suggestions of dinos were similar to many current sentiments. "You must be MAD!" he says. And what do dinosaurs have to do with Singapore? he added. 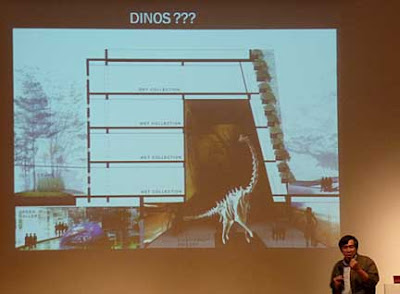 How did the question of dinosaurs for the New Natural History Museum come about? Prof shared yet another series of quirky events that seemed to be the hallmark of the history of our natural history. One of Prof's post doc students had a cousin who was involved in digging out dinosaurs. Would Prof be interested in checking this out? 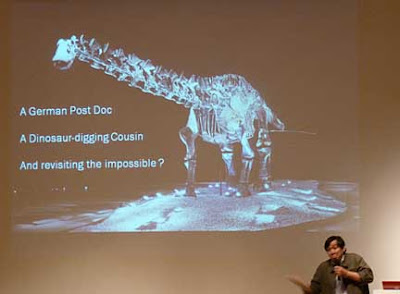 Various visits and other events eventually led to Singapore having a chance at acquiring a very unique set of three dinosaurs. These dinosaurs are rarely found complete and as Prof pointed out, 'Twinky' the juvenile is particularly special as such remains are rarely found. 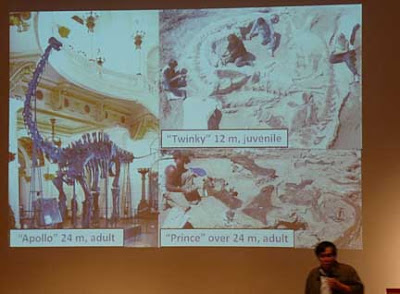 This species of dinos are humungous and awe-inspiring! 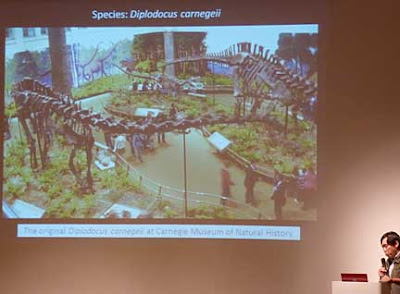 Prof also shared a breakdown of the costs of bringing in the dinosaurs. RMBR had done their checks and the dinos are authentic, and the price reasonable. Also, we need to raise the money from PUBLIC donations. NO taxpayers money will be spent on this acquisition. 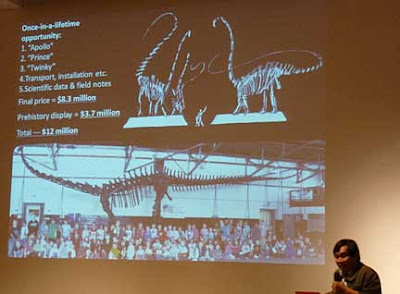 Prof explained how during their earlier study visits to many natural history museums worldwide, it became apparent that at leading museums, dinos were not only a major draw but also a great source of inspiration to get people to think more deeply about natural history. 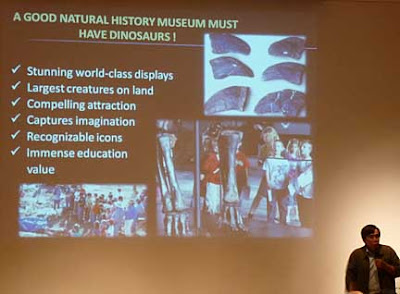 But here is the most compelling reason for bringing in dinosaurs. They are a catalyst, Prof says. 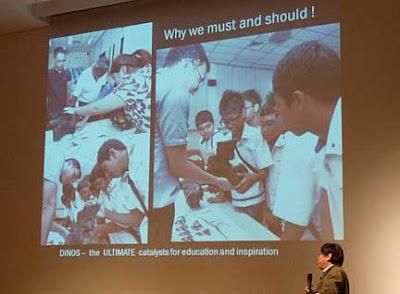 There is a visceral reaction to dinosaurs! That can lead to more thought and action for biodiversity issues today. 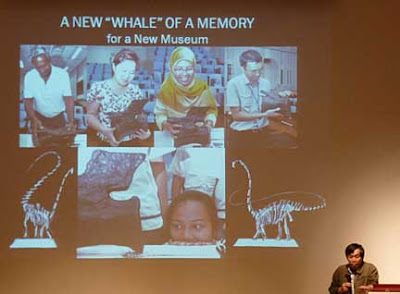 Prof gave a very stirring speech (as usual), and I did feel a twinge for the dinosaurs as I listened. But the moment that I fell over the abyss was when we actually got to see and touch REAL dinosaur bones after the talk. There were two large backbones on either end of the table, with a replica of the head in between them. I noticed how everyone went to look at and touch the REAL bones even though these large bones are quite boring compared to the more intricate replica of the head! 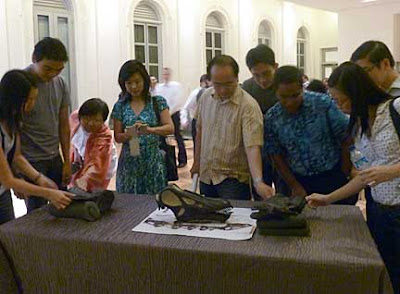 In the presence of Real Dinos, the child in each of us emerged. We had to touch it, and take photos with it. We are captivated and fascinated. Dr Tan Heok Hui no doubt took much better photos of this transformation than I did. 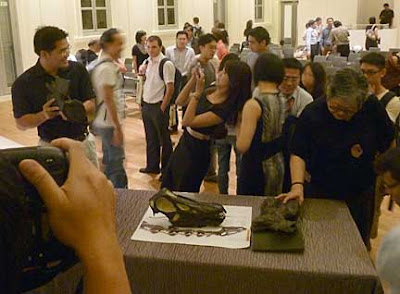 The artifacts naturally generated a flurry of questions: "Wow, the head of the dino sure is small compared to the backbone!". How did such a small-brained animal survive? See it doesn't have molar teeth. What does it eat? How did the bones get so well preserved? And lots and lots more thoughts...inspiration indeed! 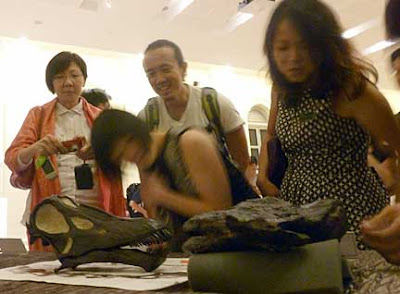 And when I touched the dinosaur bone, I too fell in love. It's inexplicable, a personal feeling. We really need to get dinosaurs for our New Natural History Museum!

Siva's love affair with the dinosaurs started much earlier and lasted much longer than mine, but still remains strong!

Here's an appeal letter from the RMBR about the dinosaurs.

Once more – the race is on.

A year ago, through your generosity and kindness, we raised the seemingly impossible sum of S$46 million to ensure that a new natural history museum for Singapore will be built. This has not only secured its priceless century-old collections but will offer a large gallery for public education.

One of the many iconic displays we want to place in this gallery is a model of the famous 1800s whale. However, we also realized that in the modern world, what would make a truly world-class gallery that excites a new generation of nature lovers would be the addition of a magnificent display of dinosaurs. Yet, real dinosaur fossils are extremely hard to come by, if at all. As destiny would have it, through a series of unexpected coincidences, the Raffles Museum of Biodiversity Research (RMBR) was given a unique chance in April 2011 to purchase genuine and near complete fossils of a family of three gigantic sauropod dinosaurs - among the largest animals ever to have walked the Earth! One is rare enough, but a group of three, which includes an even rarer teenage dinosaur, is unprecedented!

Contrary to what many people think, dinosaurs are not “alien” to Singapore’s history! When dinosaurs walked the Earth over 100 million years ago, Singapore was part of a mega continent that had such giants. The educational and research value of dinosaurs is that they greatly help us understand life on Earth. To document the history of life, we must know why dinosaurs were so successful and understand the circumstances that led to their demise. Dinosaurs will help Singaporeans understand the biodiversity, climate change and extinction challenges now facing mankind and the planet. Throughout the world, dinosaurs are renowned as "catalysts" to get people of all ages excited about biodiversity, natural history and science. Their educational value is, therefore, second to none.

This family of three dinosaurs will be the centre-piece of the new gallery, the “pièce de résistance” which places the new museum and Singapore on the world stage. The HEADLINE stories, which made the front pages of both the Sunday Times and Zaobao on 10 July and “Why we need dinos” on 17 July (attached), are testament to the excitement, interest and value of such an acquisition for the new museum.

We really hope you can help us bring these fascinating and majestic dinosaurs to Singapore. Please join us in donating to the Dinosaur Exhibit at http://rmbr.nus.edu.sg/dino/dino-online.html.

With thanks from the bottom of our hearts.


Get updates on the new museum via the RMBR news blog.

I've briefly touched on other issues I found interesting in Prof Peter Ng's talk in this separate post.