A small team check Pulau Semakau for abandoned driftnets and traps this morning for Project Driftnet. It was also a chance for me to check up on the health of the reefs here. 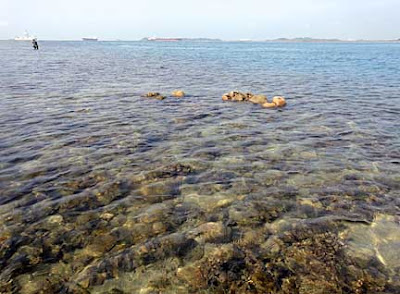 We saw lots of interesting fishes, plants and also removed nets. It was a long but exciting day!

The nine of us decided to split up into three teams so that we can thoroughly check three separate areas of Pulau Semakau for abandoned nets and traps. Brandon, Travis and I are doing the North-west section nearest Pulau Hantu. 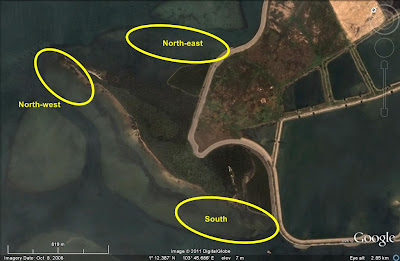 We had a very pleasant early morning walk to our start points. The 'halfway' tree is so huge now! This tree marks the halfway point to the forest entrance to the shore. 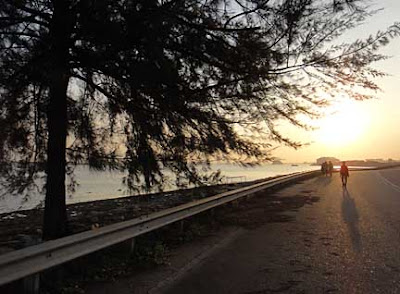 Along the walk, we noticed this strange crustacean. It seems to be some kind of mantis shrimp (Order Stomatopoda). But what is it doing on the road? How did it get there? 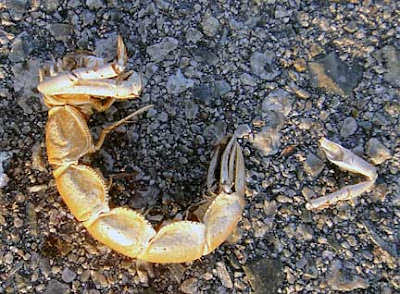 Although the tide was high, the water was clear! So it was possible for me to have a quick look at the health of the corals here. The North-west Semakau shore faces Terumbu Raya which I visited recently. So I was hoping to encounter a similarly rich and healthy reef on Pulau Semakau. 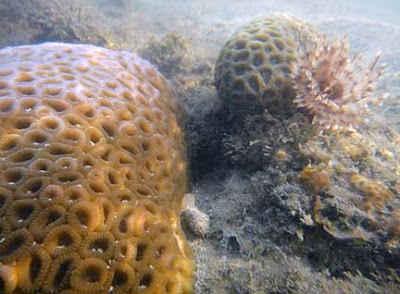 I noticed that there seems to be quite a few hard corals here that were rather pale or white. Though few that I saw were bleaching outright as at the height of the bleaching event a year ago. 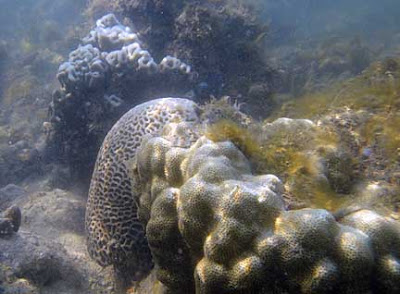 As with most of our other shores, Favid corals (Family Faviidae) are common on Pulau Semakau. I noticed that many colonies had white portions. 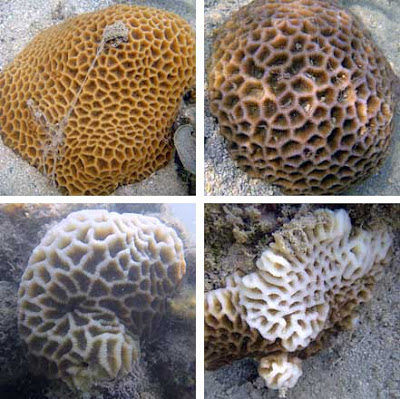 More Favid corals, some with yellowish or whitish parts. 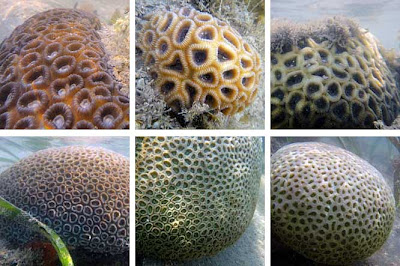 I saw several large baby pink Favid coral colonies. I'm not sure if this means they are ok.

I saw many colonies of Brain corals (Family Mussidae). Some of them seemed bleached, with white or flourescent yellow portions. 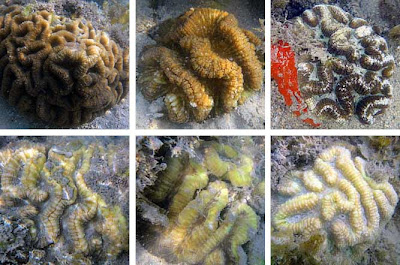 Also common on this and our other shores as large colonies of Pore corals (Porites sp.). Some of those on Pulau Semakau were rather pale, though not bleaching outright.

I saw a few Disk corals (Turbinaria sp.). Some were rather pale, while others were nice and colourful.

Anemone corals (Goniopora sp.) are also common here, and some were pale or yellowish.

It was nice to see a few colonies of Cauliflower corals (Pocillopora sp.) as these corals suffered badly during the bleaching event last year.

The hard coral situation on Pulau Semakau seems somewhat similar to what I saw on recent trips to Terumbu Semakau and Terumbu Raya which lies off Semakau.

Some less commonly seen corals that I saw included a few small colonies of Pebble coral (Astreopora sp.). One was a little white at the tops.

I saw a cluster of Sunflower mushroom corals (Heliofungia actiniformis) and they seemed healthy.

Wow, is this a Cabbage coral (Trachyphyllia geoffroyi)? I seldom see this hard coral on our shores. 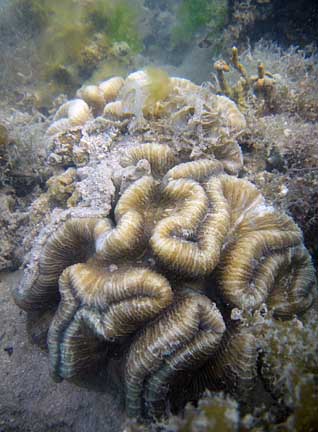 I saw a few medium-sized Leathery soft corals (Family Alcyoniidae) of various kinds. None were obviously bleaching although some appeared a little less 'lively', with the polyps contracted even though the colony was submerged. 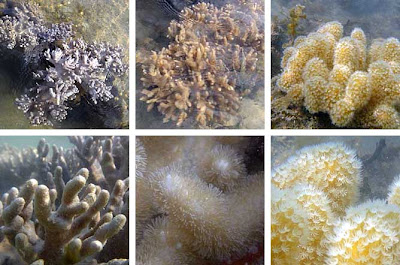 I saw some rather pale Carpet corallimorphs (Order Corallimorpharia). And a nice patch of Ridged corallimorphs that I don't often see, my first entry of this for Pulau Semakau.

We came across several Giant anemones (Stichodactyla gigantea), only one with a clownfish which unfortunately was very shy. Also one Bubble tip anemone (Entacmea quadricolor), and several Frilly sea anemones (Phymanthus sp.). None of them were obviously bleaching, although some of the Frilly sea anemones were rather flourescent. 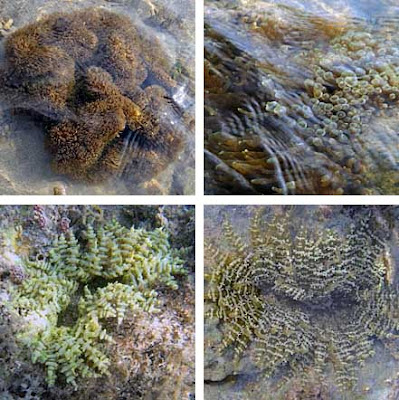 Of course, we saw many animals. We had a particularly good 'fishy day' so there's an entirely separate post on the fishes we saw. Here's some of the other animals we saw.

The Semakau shore has lots of Noble volutes (Cymbiola nobilis) so it's not surprising to see one crawling about among the seagrasses. Travis also spotted some squids (Family Loliginidae) and we came across several egg ribbons of slugs. 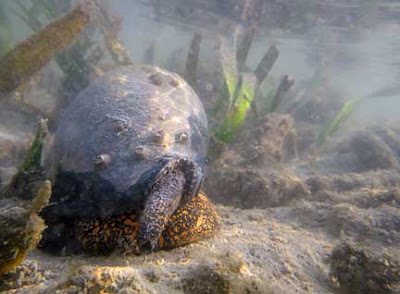 Knobbly sea stars (Protoreaster nodosus) are not as common on Pulau Semakau as they are on Cyrene Reef. So it's nice to see one today. 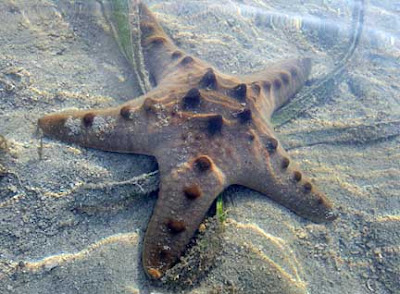 The very special Cryptic sea stars (Cryptasterina sp.) are still here. So far, I have only seen them on Pulau Semakau.

I saw this strange crab that I don't usually encounter. It has spoon-tipped pincers but also sharp 'teeth' on its body edges and spiny legs. 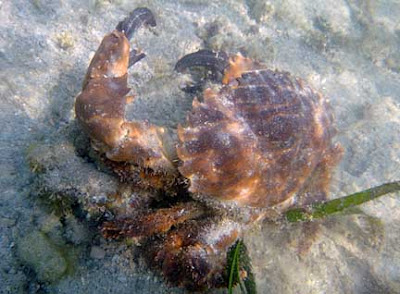 The crab was not shy and didn't run away. So here's a look at its front. 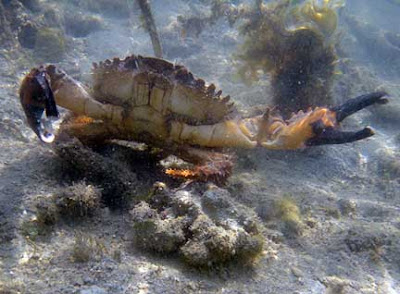 Pulau Semakau has a very nice range of sponges of all kinds, colours and shapes! 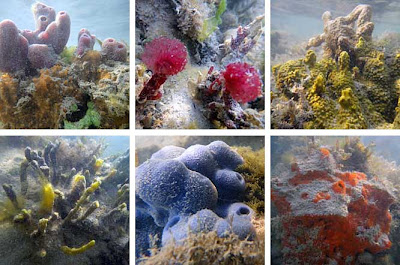 We didn't come across any abandoned nets or traps in our little survey of  reefs. Which is a relief. So we headed to the net that I know has been entangled on a mangrove tree for years. I first noticed it in late 2008. Ivan and Charmaine removed some of it in 2009. Today, we finally get a chance to remove all of it. 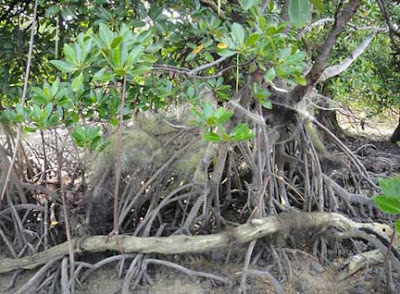 The net doesn't look very much at first. 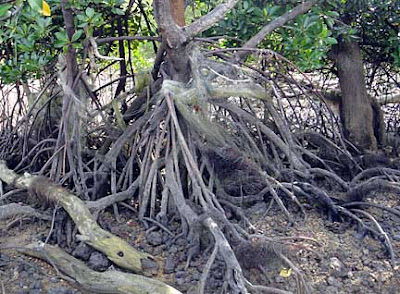 But as we disentangle it, the net got bigger and bigger! 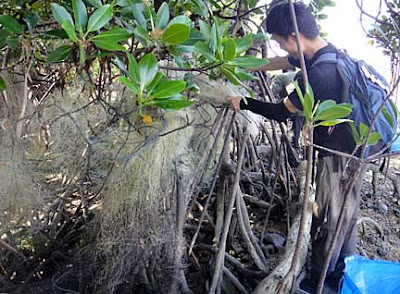 What a huge pile! We could hardly squash into the three big bags we had. 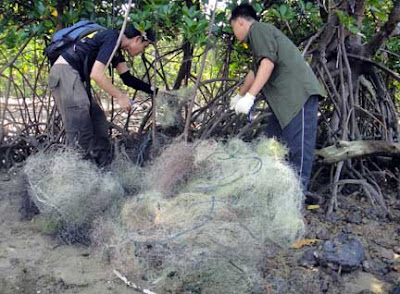 On the way back, I noticed the high shores are remarkably clear of trash! Andy tells me the Navy had recently once again done clean up on this shore. This is a reprise of their effort in 2009. Bravo! 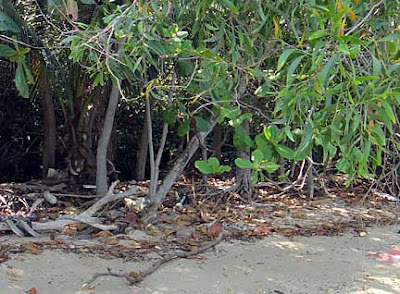 Alas, there is still a great deal of large wooden debris stuck among the mangrove trees in one small area of the shore. I couldn't even pass through the area any more. 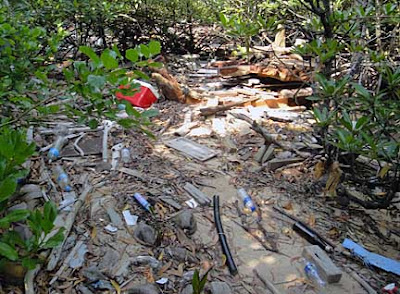 I also stopped by to have a look some of the special plants on Pulau Semakau. Such as the super rare Bonduc (Caesalpina bonduc). This is the only known female Bonduc in Singapore and it seems to be flowering and fruiting. Hurray! 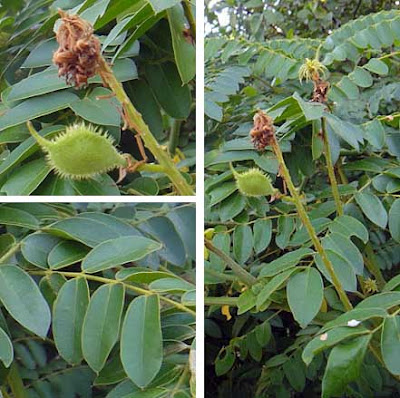 We stopped by to check on the Critically Endangered Api-api Jambu (Avicennia marina). It seemed fine as was blooming and fruiting well. 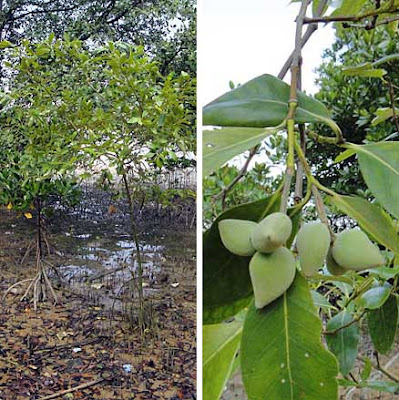 The Seashore pandan (Pandanus tectorius) is blooming! I didn't have time to observe more closely what kind of insects pollinate this humungous plant. It was already very late and we were the last to leave the shore. 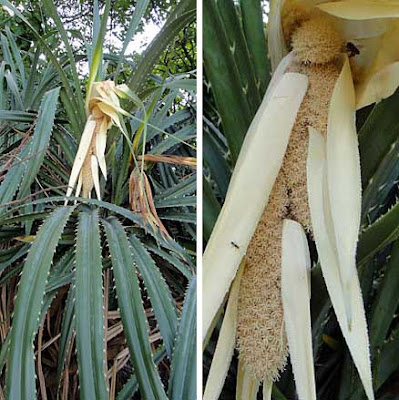 We had a final bit of adventure as our boat narrowly avoided getting stranded on Terumbu Bukom on the way home. We visited Terumbu Bukom recently! Fortunately, the tide was high enough so neither the boat nor the reef was damaged.

It was great to be on the trip today with Andy, Mei Lin, Jocelyne, Brandon, Travis, Rene, Marcus and Nicole. Thanks to everyone for being there, especially Jocelyne who celebrates her birthday today! The other two teams also had exciting encounters (snakes, another seahorse, jellies of all kinds) and also found nets and traps. I'm sure they will blog soon!