There is a stretch of Changi which has lush seagrasses as well as colourful rich marine life growing on hard surfaces. 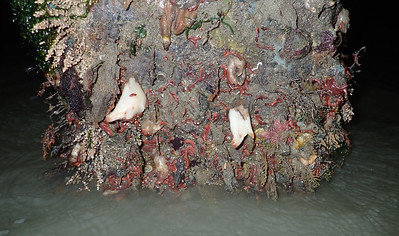 This shore was hit by the Jan 2017 oil spill and scoured by loose stakes rolling on the shore. It's good to see that the situation continues to improve here.

The large Burgundy anemone is still on the jetty legs. I first saw it in Sep 2018. Many different colourful animals had settled on the jetty legs. I saw several Milliaris cowries and one Blue dotted flatworm, there were only a few small, dying sea fans. Today, I didn't see any flowery soft corals or Onyx cowries. 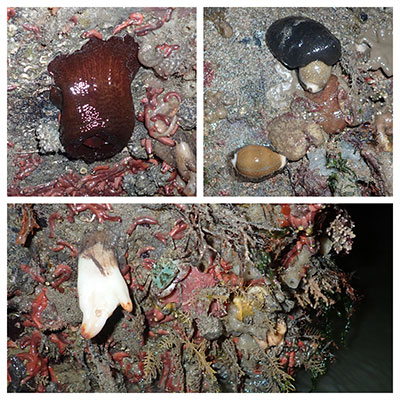 The Tiny red sea cucumbers that I first saw in numbers on our last survey in Jun 2019, have now exploded to densely cover a small area. They are a small species and are not baby sea cucumbers. 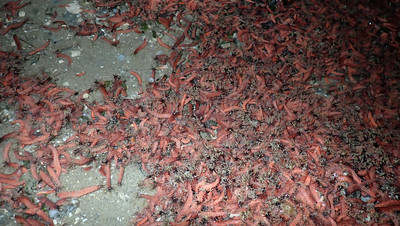 They really overwhelmed other marine life on this small area of the shore. 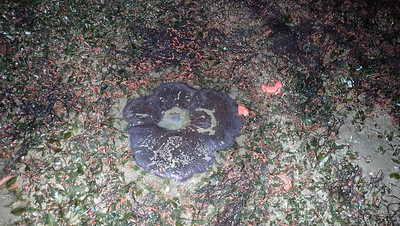 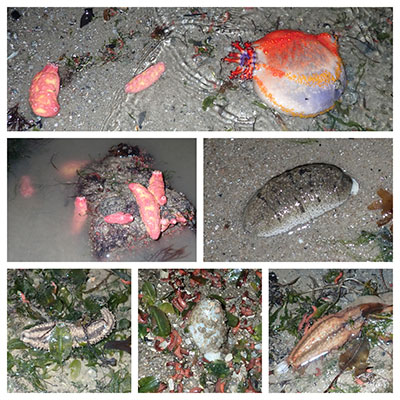 This shore also has lots of sea stars. I saw a lot of Biscuit sea stars from tiny to medium sized. And many young small Cake sea stars which still had long arms, these arms become shorter as the sea star grows and makes it look more cake-like. I didn't see any Knobbly sea stars. The rest of the team saw some Painted sand stars, Plain sand stars and a small Eight-armed sea star. I saw one White sea urchin, and several Blue feather stars. This is similar to our last survey in Jun 2019 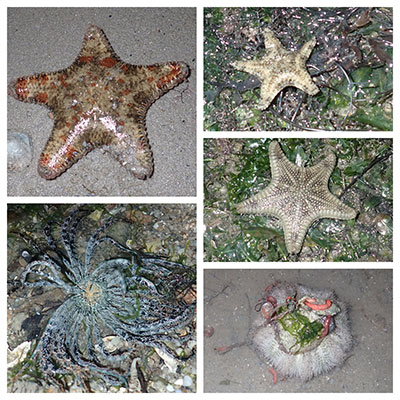 This shore remains soft and silty in many parts, perfect for burrowing cerianthids. But I didn't come across any sea pens. The most abundant anemone were Haddon's carpet anemones. I came across one common Peachia anemone that was uprooted, but did not see any one Brown peachia, which was described from Singapore! There were also many Big hermit hitching anemones. 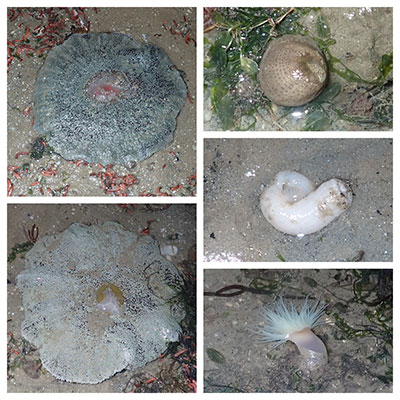 There are good lush growths of seagrasses throughout the shore we surveyed. Mostly Spoon seagrass (with small and large leaf blades) and Needle seagrass (narrow leaf blades). I didn't see any Fern seagrass.  I didn't notice any dugong feeding trails on this trip, although not much of the seagrass was exposed as the tide wasn't super low. This is similar to what I saw on our last survey in Jun 2019, but much better than our survey in Sep 2018, when I noted that the shore in front of the seawall is rather barren and smells anoxic. 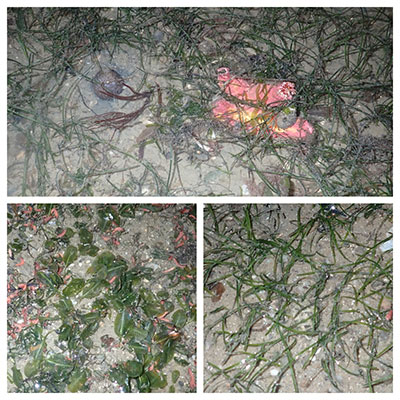 The tide turned all too soon, but we enjoyed a glorious sunrise. 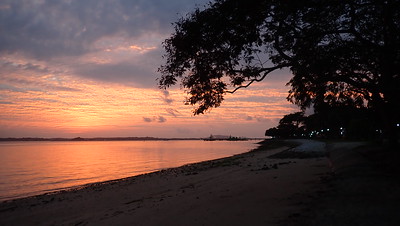 Since our last survey  in Jun 2019, a long seawall from Carpark 4 to Carpark 2 has replaced a series of long stakes and large bags that appeared to be some attempt at erosion control. During the Jan 2017 oil spill, the entire set up was badly covered in oil and remained so 12 months after the spill was cleaned up elsewhere.
In the past, many of the stakes that were uprooted from the high shore littered the low shore. As the stakes move in the waves, they were probably also killing any seagrass or animals that attempt to settle there. A blog post by Jocelyne Sze on this setup in 2014 showed it was still okay. I observed it falling apart in Apr 2015, again in Aug 2016. This is what I saw on our last trip here in Dec 2017.
It's a relief to see the end to the stake littering situation. And I sense the shore is recovering.