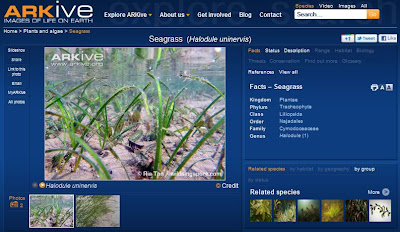 Our seagrasses are also featured on the Encyclopedia of Life!


ARKive aims to create the ultimate multimedia guide to the world's endangered species. Believing that wildlife films and photos are vital weapons in the battle to save the world's endangered biodiversity from the brink of extinction. I was quite surprised to be invited and very glad to submit my photos to their effort. They also have a list of species found in Singapore! The list currently has 564 species, up from 420 earlier this year. Hurray!

More about Singapore photos featured in ARKive in this earlier post.

Another wonderful site to contribute photos of Singapore's wildlife is the Encyclopedia of Life (EOL). Which has just been revamped for a much nicer layout! I've been contributing to this site via the EOL flickr group, so far sharing nearly 3,000 photos. And all of them have been accepted, with a regular stream of confirmation of IDs from the experts. 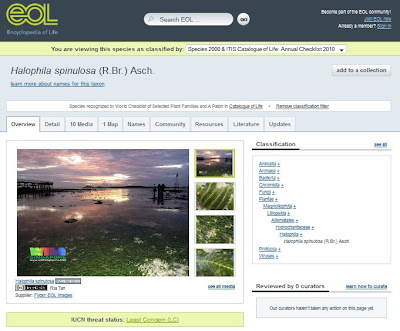 There are many 'missing' photos even for common plants and animals found in Singapore. You CAN make a difference by sharing your photos. More about how to share your photos on the EOL site in this earlier post.

Share your photos of our wildlife with the world! So that more people can learn that Singapore has wild places and people that care about them!
Posted by Ria Tan at 9:14 AM