In early 2007, there was mass death on Chek Jawa following massive flooding in Johor due to heavy rain in Dec 2006. 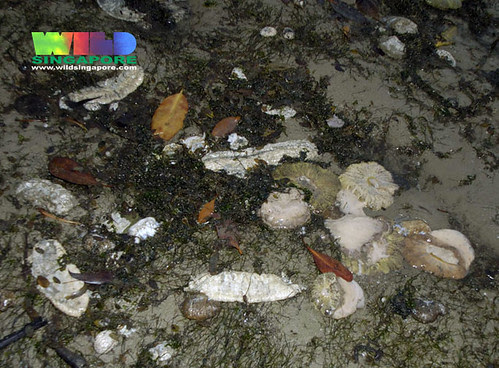 Kok Sheng conducted a study of recovery at Chek Jawa following the mass deaths. See his excellent post What caused the mass death? on his Chek Jawa project blog which has lots more details.

Four years after this mass death, Chek Jawa has yet to fully recover.

We seem to experiencing a similar event again.

Chek Jawa lies at the mouth of the Johor River. Huge inflows of freshwater from the River that lasts for days or weeks can severely impact intertidal marine life on Chek Jawa and other shores in the Johor Straits in Singapore and Malaysia. 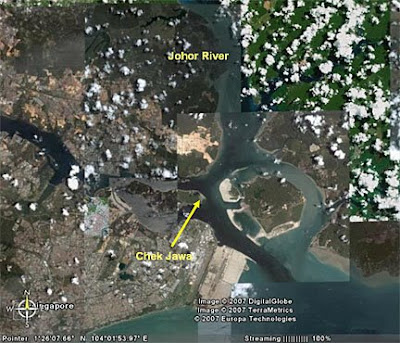 How much freshwater can flow down from Johor?
In this image taken from Kok Sheng's blog, in pink is the catchment area in Johor that drains through the Johor River and flushes onto to Chek Jawa and our shores on Changi. As Kok Sheng remarked in his post, this pink area is quite large, just compare it to the size of Singapore mainland. 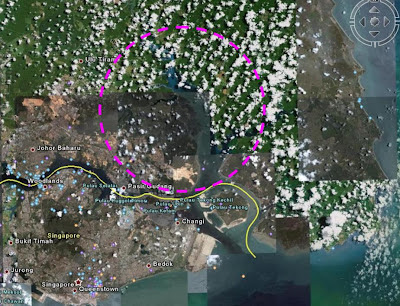 How bad is the flooding situation in Johor now?
Today's media reports on flooding in Johor report that "Water levels in Johor rivers are rising dangerously, raising fears of a repeat of the 2006 floods" with three Johor rivers bursting their banks on 30 Jan. If the downpour continues, the Department of Irrigation and Drainage Malaysia warned that five more rivers would also overflow today (31 Jan). Flood water current was described as 'swift' and the public told to avoid Labis-Segamat Road. Malaysian train services to the East Coast and South have been "disrupted by floods and landslide caused by heavy rain" and services "had to be cancelled as a precaution to ensure safety of passengers as it would be risky to allow trains to use the tracks when submerged by flood waters".

While the incessant rain started two days ago in Singapore, this has been going on for six days in Johor: "Rain, sometimes heavy interspersed with drizzles, has been pouring since six days ago, causing flooding in other areas of Johor like Segamat, Ayer Hitam and Yong Peng."

The Malaysian Metereological Department issued 'Heavy Rain Warning (Red Stage)' for Johor on 30 Jan, expected to continue until 31 Jan. Thanks to Kok Sheng for the link to this (pdf).

Media reports on flooding in Singapore report flash floods mostly in the east. "Although the rain yesterday was islandwide, the eastern area around Changi and Pulau Ubin was the wettest. As at 7.50pm yesterday (30 Jan), 200.8mm of rain had pelted down on Pulau Ubin, and 178mm in Changi."

What caused all this rain?
In its response to my paper queries, NEA said that the region has been "experiencing the effects of a North-east Monsoon surge" for the past few days. This refers to a surge of cold air from an intense high-pressure area over Northern China, which results in a strengthening of winds over the region, said NEA. That brings "widespread moderate to heavy rain and occasionally windy conditions to Singapore".

The National Environment Agency said current conditions were not expected to last until the Chinese New Year period this week.

Let's hope the weather improves for the sake of the marine life in the Johor Straits.
Posted by Ria Tan at 9:18 AM