Straits Times proudly featured a story of how an endangered Queensland grouper is being served by 2nd Kitchen restaurant, the second time it has done so. 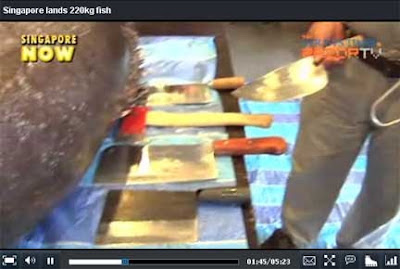 In its feature, Razor TV devoted much time showing how the fish is dismembered.

In the unsubtitled Razor TV video clip, the english-speaking presenter speaks to the owner who replies in Mandarin.
From Razor TV 17 Jul 10;
The presenter speaks to a "Taiwanese grouper breeder" who responds "to those who are against eating the fish which has been listed as an endangered species". Unfortunately the response is in Mandarin and is unsubtitled. I don't speak Mandarin so I have no idea what he said.

The locality of the fish is the Pacific Ocean, around the region of Singapore,Indonesia and Malaysia. In fact, you cannot find such fish in Taiwan waters. But Taiwaneses had try to breed this fish in captivity and have been successful. We can still find this kind of fish in the ocean and thus no fear of it becoming extinct.

It has been successfully and commercially bred in Taiwan to such epic sizes and thus there is no fear of it becoming extinct as yet.

Update: See also Siango's post on Trek to Paradise with translation and response to this issue.

The presenter also only mentioned AVA in relation to them saying that the grouper "was not the biggest fish imported into Singapore". The biggest was a tuna. Full reports on wildsingapore news.

According to the IUCN Red List, the Queensland grouper (Epinephelus lanceolatus) is the largest reef-dwelling fish in the world and was listed as Vulnerable in the mid-1990s by the IUCN in recognition of "its vulnerability with respect to exploitation".

More about the Queensland grouper in the earlier post about the first fish served by 2nd Kitchen restaurant.

Update: One reader wrote to the Straits Times Forum to lament stories in the popular press that glamorise the consumption of vulnerable or endangered fish species.

MR HARVEY NEO: 'I find it disconcerting that the sale of a 220kg Queensland grouper (Epinephelus Lanceolatus) to a local restaurant was reported with such relish last Saturday ('Eatery dishing up 220kg monster fish'), to the point of detailing the various prized parts of the fish and how they can be cooked.

The fish is listed by the International Union for Conservation of Nature as a vulnerable species. The situation could very well be more serious because actual population data for the fish cannot be ascertained due to its rarity.

Most states in Australia have placed a partial or total ban on the fishing of the Queensland grouper as early as the 1970s. The Andaman Islands have also banned its commercial exploitation.

Such conservation efforts would come to nought if the popular press continues to glamorise the consumption of vulnerable or endangered fish species. The Queensland grouper is the world's largest reef-dwelling fish and a majestic and beautiful creature. It is a pity some can appreciate it only when it is steamed, stewed or stir-fried.'

Update: Straits Times features the issue again, highlighting the views of chef and restaurant owner Johnny Tan on the flak he has received for buying and dishing out the 220kg giant grouper.

To Mr Tan, the situation has been played up.

'People will say protect, protect, but they have little knowledge about the fish,' said the 48-year-old. He said the Queensland grouper is not rare in the region.

There are also breeding facilities for the fish in Taiwan, Malaysia and Singapore, he pointed out.

Mr Tan himself rears about 300 giant groupers in a fish farm in Sabah but they are not for consumption.